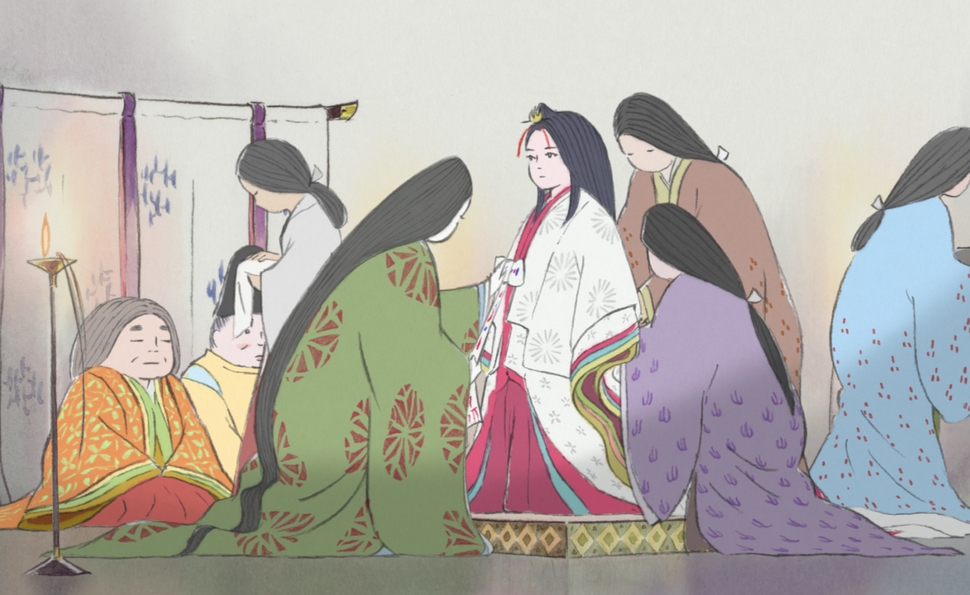 The Tale Of The Princess Kaguya

It’s no great surprise to see composer Joe Hisaishi’s name in the credits of The Tale Of The Princess Kaguya, since he’s scored nearly every Studio Ghibli animated feature. But it’s still a treat to hear Hisaishi’s music, which has lyrical grace and sonic depth, and never fails to make a Ghibli film seem even more like a piece of fine art. Even more than Pixar—or Walt Disney studios in its Walt-headed heyday—there’s an impeccability to Ghibli’s work, with every element executed with thoughtfulness and precision. In The Tale Of The Princess Kaguya, Hisashi’s score is used sparingly, to evoke ancient Japan, the changing of the seasons, and the often heartbreaking maturation of a young girl. But even when the score is absent, the movie’s sound effects are so subtle and exact that they can capture the soft pelt of snow flurries. Even the quietude in Kaguya is just-so.

The sheer artistry of The Tale Of The Princess Kaguya matters, because the movie has an odd and overstuffed plot that sometimes works against its beauty. Based on the Japanese folktale “The Tale Of The Bamboo Cutter,” Kaguya tells the story of a girl who springs to life from a bamboo stalk and then grows rapidly, under the care of an elderly, childless couple named Okina and Ona. Kaguya is very happy in the country, playing with the other poor children, but when Okina finds gold and fabric for beautiful robes in the same grove where he found Kaguya, he takes it as a sign from God that she’s meant to live in the finest house in the city, and to be instructed on how to conduct herself like a princess. When The Tale Of The Princess Kaguya moves to the city, the simple, elemental pull of the movie’s first act gives way to bumbling slapstick from the in-over-his-head Okina, and a pile-up of new characters. And then the movie takes another turn in its third act, with a left-field twist that changes everything Kaguya has been about up to that point. (For more on that twist, see “The Reveal,” below.)

To be fair, most of the stranger wrinkles in The Tale Of The Princess Kaguya are taken straight from “The Tale Of The Bamboo Cutter,” and there are plenty of times when the film’s “story passed down from generation to generation” feel works in its favor. Two of the longest sections in Kaguya involve the parade of fancy lords who hear rumors of a beautiful princess with incredible wealth and come to the city to court her. Not ready for love—and annoyed at how the other rich families in the community have treated Okina like a no-nothing hick—Kaguya gives each of her suitors an impossible task to complete, and the way they choose to fulfill her demands reveals both their hypocrisy and Kaguya’s carelessness, just like in a classical fable.

It helps too that so much in the action in The Tale Of The Princess Kaguya is filtered through the perspective of its amazing heroine. Early on, the movie is about Okina and Ona not knowing what to do about this little miracle who’s entered their lives, and trying to determine the will of the divine. But it very quickly becomes about Kaguya’s stubborn insistence on doing what she wants. Kaguya is adept at everything, takes nothing too seriously, and sees no reason why she should spend her days crouched and immobile, her face painted white and her teeth painted black, playing an instrument and drinking tea, rather than running through the fields back at the home where she grew up. The best parts of The Tale Of The Princess Kaguya have nothing to do with courtly intrigue, but are instead concerned with things more primal and universal, like a girl resisting the social constraints of womanhood, and well-meaning parents watching their most precious possession slip away from them.

Throughout The Tale Of The Princess Kaguya, even when it gets bogged down in too much story, the animation is so gorgeous that any given frame could pass for a masterwork. The film was directed by Isao Takahata, one of Ghibli’s founders, who’s been responsible for some of the studio’s most striking and unusual films (including the internationally acclaimed Grave Of The Fireflies and the vastly underrated Only Yesterday). Kaguya has the muted color palette and loose brush strokes of old Japanese paintings, and an attention to the details of movement that can make an audience see a frog hopping or a kitten playing in a whole new way. But much like the way he uses Hisaishi’s score, Takahata keeps the animation restrained until two breathtaking sequences: one where Kaguya dreams of fleeing a tedious party in her honor, and another where she finally does return to her old land and old friends, and takes her childhood crush on a flight through the mountains. These sequences rough up the drawings, creating a feeling of motion through minimal backgrounds and jittery lines. They’re raw and pure, these moments, forgetting all the tangled plot-complications and just cutting loose—art for art’s sake.

(Note: The Tale Of Princess Kaguya is being released in both an English-dubbed version and the original Japanese version. Check your local listings.)

GoWatchIt: Buy. Rent. Stream The Tale Of The Princess Kaguya