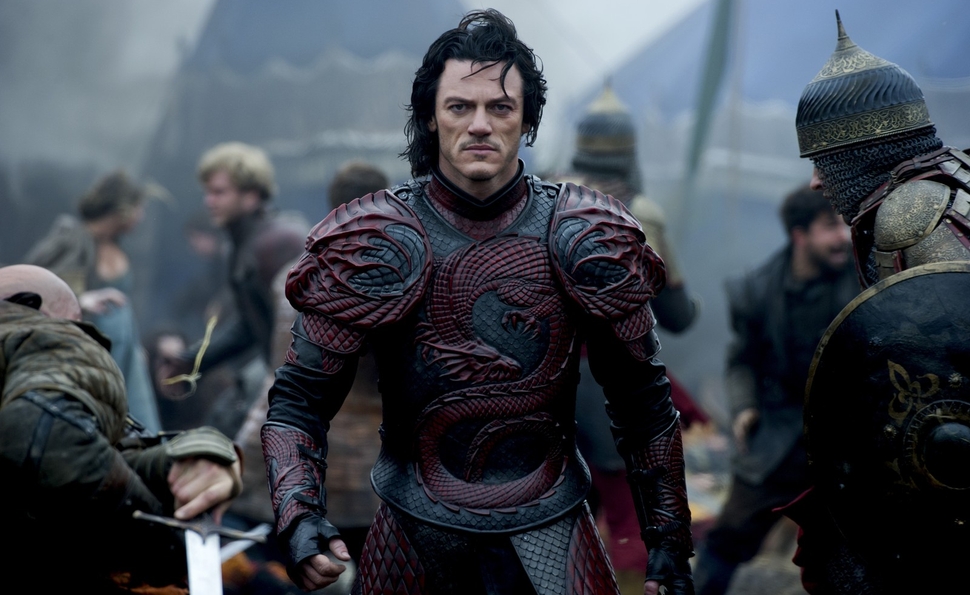 This year has brought two of the most original takes on vampire mythology in recent memory. First, Jim Jarmusch’s Only Lovers Left Alive held a special fascination with the concept of eternal life, and the quirks, knowledge, and accumulated wisdom of vampires who have simply been around a long time. And now, Dracula Untold boldly attempts to retell the Dracula origin story by sinking its teeth into Bram Stoker’s novel and draining it of all the passion, sensuality, and ambience that have seduced readers and moviegoers since the turn of the 20th century. The filmmakers apparently calculated that audiences won’t miss all that stuff if they’re distracted enough by green-screen gothic landscapes, slo-mo action sequences modeled after 300, and wave after wave of CGI bats. As trade-offs go, it’s about as fair as the Louisiana Purchase.

Drawn from the historical figure of Vlad The Impaler, the prologue tells how Prince Vlad (Luke Evans) and a thousand other Transylvanian boys were enslaved by the Turks and trained (and mercilessly beaten) to become fearless, relentless soldiers. Vlad struck fear into the enemy when he was a young man, but he’s learned to repress his dark side, rule peacefully over his subjects, and be a Ward Cleaver type to his wife Mirena (Sarah Gadon) and their pre-teen son. But it’s déjà vu when the new Turkish sultan, Mehmed II (Dominic Cooper), who was once Vlad’s brother-in-arms, comes to Transylvania demanding another thousand boys, including Vlad’s son, to add to Mehmed’s army. (Why does Vlad The Impaler get the works? That’s nobody’s business but the Turks’.)

Rather than submit to his oppressors, Vlad strikes a Faustian bargain with an ancient creature (Charles Dance, in the film’s sole arresting performance) who lurks in a cave in nearby Broken Tooth Mountain. If Vlad drinks the stranger’s blood, he’ll have the power of 100 men and the speed of a falling star for three days. However, if he succumbs to his thirst for human blood, he will remain a vampire for all eternity. As Faustian bargains go, it’s an unusually favorable contract for the signatory—less a deal with the devil than a Publisher’s Clearing House subscription—but it requires discipline and sacrifice on his part, especially once the lives of Vlad’s family members are directly at stake.

Tailored for a PG-13 rating, the sexless, bloodless Dracula Untold positions itself mainly as another superhero movie, reportedly the first step in Universal’s plan to retool its classic monsters for a Marvel-style cinematic universe. So many of Dracula’s bedrock qualities—his powers of seduction, his association with religion and sin, his need to drink the blood of innocents for sustenance—are either drastically weakened or eliminated altogether. Instead, Evans’ mirthless Vlad is a supernatural badass with fangs, someone who can call on bats to flap through vast swaths of enemy soldiers, and whose only Kryptonite is silver. (In the film’s most ridiculous scene, Mehmed lures Vlad into an ankle-deep chamber of silver coins that resembles a children’s ball pit at an amusement park.)

By throwing out the traditional vampire conflict—the “out” clause on Vlad’s deal ensures that the terrible sacrifices he’s willing to make aren’t binding—Dracula Untold loses its intrinsic (and prurient) appeal without gaining anything valuable in the process. There’s a lot of significance attached to Vlad putting on the old Impaler armor that he’d socked away all these years while keeping his murderous aspect firmly under wraps. But there’s never any sense of mission drift, or fear that this terrible power he’s been granted will threaten to overwhelm his righteous mission of vengeance. He has a cape. He flies as fast as a shooting star. He’s vulnerable to a precious alloy. Has he considered moonlighting as a reporter?