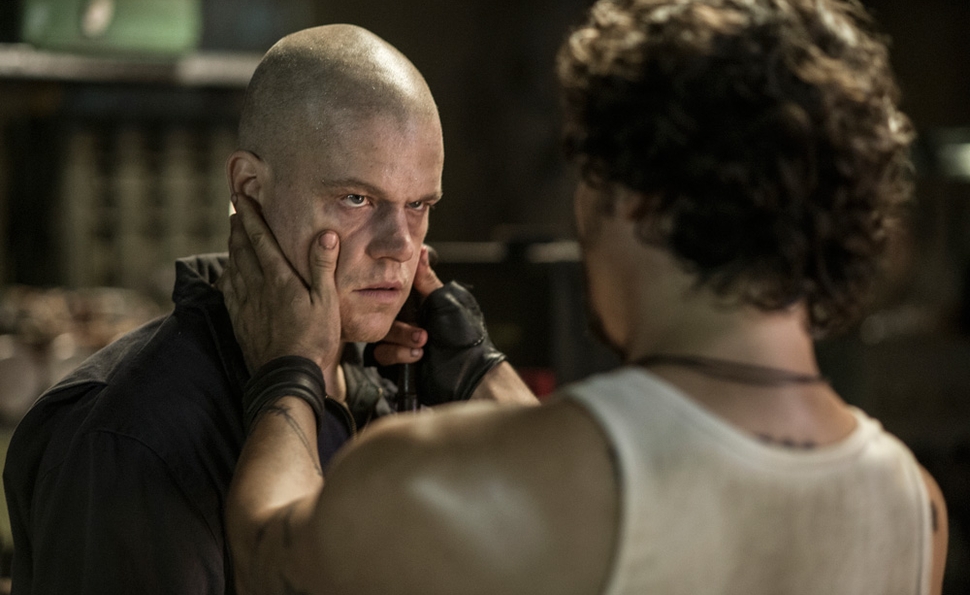 One of the best scenes in Elysium, the second feature from writer-director Neill Blomkamp (District 9), is also one of the film’s rare quiet moments. Three ships illegally attempt to flee the wrecked, poverty-ravaged Earth of 2154 for the abundant riches of Elysium, a paradisiacal, medically advanced space station that’s home to the privileged few. First one ship, then another, falls to a missile, an event Blomkamp shoots from a distance before cutting to a control panel indicating a successful strike. Over a few seconds, the film conveys just how little the deaths matter to the people with money. They draw minimal notice from the rich, who not only distance themselves from the little people, but literally look down upon them.

Elysium is otherwise much louder and never so subtle, using its 22nd-century setting to comment on the inequities that currently divide the 1 percent from the 99 percent, citizens from non-citizens, and those with health insurance from those required to pay their own way. One of the film’s smarter touches is how un-futuristic its futurism feels. Los Angeles lies in rubble, but it’s the rubble of sustained neglect, reminiscent of the creeping disrepair of 21st-century Detroit and other spots in seemingly irreversible decline. Up above, the resources of tomorrow’s privileged have been directed toward living the lifestyles of today’s privileged: an endless poolside idyll catered by robots and kept going by machines capable of curing virtually any physical damage. Below, the poor suffer and die. Above, no one notices.

Blomkamp turns Elysium into a blunt weapon, but blunt weapons aren’t always effective, and two feature films into his career, he has yet to establish a second trick. Where 2009’s District 9 drew on the recent history of his native South Africa for inspiration, here, Blomkamp widens the allegorical net while telling a similar story of one man reluctantly drawn into an attempt to overthrow an unfair system, a journey that unfolds over a series of increasingly bone-rattling action scenes. Matt Damon steps into the protagonist role as Max DeCosta, a child of the 22nd-century slums who, in a series of flashbacks, is seen dreaming of moving to Elysium and taking along his young love Frey (played as an adult by Alice Braga). Paradise hangs over their heads, just out of reach.

As an adult, Max mostly dreams of making it through the day. An ex-con covered in tattoos and trying to distance himself from a past as a car thief, he plugs away at an assembly line making robots for the police and other clients, droids of the same sort that, in one early scene, harass him on his way to work. (See above about subtlety not being the film’s greatest strength.) But forces work to shake him out of his routine. While being treated for injuries inflicted by police robots, Max reconnects with Frey, now a nurse trying to care for her ailing child. Then he’s injured again, this time on the job, when he’s exposed to toxic amounts of radiation and given five days to live.

With nothing to lose, he joins his friend Julio (Diego Luna) in a scheme to steal the memories, and confidential information, of Max’s boss Carlyle (a sneering, perfect William Fichtner). What they don’t realize: Carlyle has plans of his own, having fallen into cahoots with Elysium’s Secretary Of Defense (Jodie Foster), who’s plotting a coup. To pull it off, she leans on a band of Earth-based mercenaries led by Kruger (District 9 star Sharlto Copley), a man with no real beliefs who takes barbaric pleasure in inflicting pain.

It’s a tangled plot wrapped around a simple story that pits the haves against the have-nots. In fact, Blomkamp’s main source of inspiration seems to be the oldest haves-vs.-have-nots science-fiction film there is, Metropolis. There’s nothing so inspired here, which isn’t saying that much, because few films come close to matching Metropolis for inspiration. Then again, few seem as content to borrow its naïveté, either. For all its particular references to contemporary issues, Blomkamp’s film operates entirely in generalities. Viewers get to know only a few Elysium residents over the course of the film, and even less about what drives them, beyond greed and inertia. Foster, in a surprisingly nuance-free performance, delivers Darth Vader-like pronouncements with an accent of no determinate origin. Most of her fellow citizens don’t speak at all. Are they all bad? Has privilege made them ignorant? It isn’t a minor question, since the film suggests they could end the suffering on Earth with little more than the flip of a switch.

Yet for all its simple politics, clanging dialogue, and underwritten roles—only Damon’s natural, and deepening, ability to suggest unspoken disappointment gives his character dimension—Elysium works, though never as well as it should. Blomkamp has lost none of his ability, on display throughout District 9, to create visceral action scenes that feature the tech of tomorrow but have the immediacy of powder burns or a scraped knuckle. In one fight sequence, with no weapon at hand, Max resorts to pulling the head off a robotic opponent, and the film makes every grunt and crackling wire feel like part of a life-or-death struggle. (The robot’s head isn’t the only thing to suffer grievous injury, either.) The film also keeps its world vivid, from Max’s hovel to the sterile interiors of Elysium. While Blomkamp’s creation never reflects our world as effectively as it wants to, it still feels like a real place, one where the promise of a better life hangs tauntingly in the sky, inspiring the sort of dreams that could lead a child, grown bitter with time, to try dragging it down to Earth.