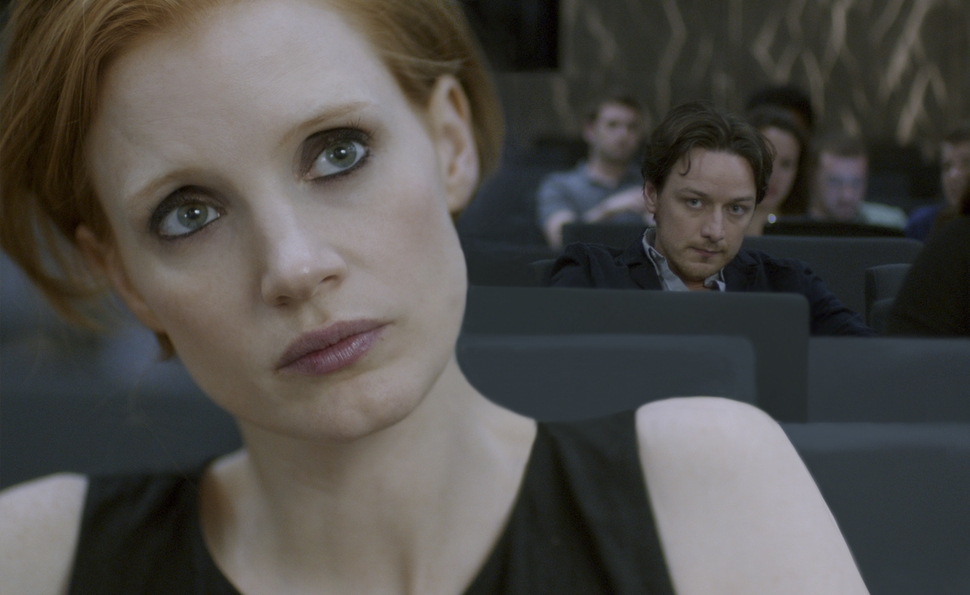 The Disappearance Of Eleanor Rigby: Her/Him

When writer-director Ned Benson’s The Disappearance Of Eleanor Rigby debuted at the Toronto International Film Festival in 2013, it screened as a double-bill: one film tagged Him, about a struggling New York restaurant owner (played by James McAvoy) trying to get over his separation from his wife; and one tagged Her, following that wife (Jessica Chastain) as she moves back in with her parents and tries to restart her life. When The Weinstein Company bought The Disappearance Of Eleanor Rigby at TIFF, some wondered how the Weinsteins were going to release a project this unwieldy, consisting of a pair of features that Benson insists can be watched in any order, or can stand alone. The answer is that the Weinsteins encouraged Benson (or “allowed,” according to the director) to create a new Them cut, which opened last month to mixed reviews. But the plan all along was to follow Them up with a release of The Disappearance Of Eleanor Rigby in its original form—with the unusual split construction that had landed Benson’s script(s) on The Black List of best unproduced screenplays.

The bifurcated Eleanor Rigby is the preferred Eleanor Rigby, but that’s not because Benson’s dual-film structure “works,” per se. Contrary to what Benson says, Him and Her aren’t really stand-alone films. Each has scenes and moments that are only meaningful in the context of their companion. And while Her is a mostly effective indie drama, Him is a wisp of a film with only a few standout scenes (mostly the ones featuring Chastain), which means that anyone who watched Her before Him would probably find the male side of the story anticlimactic. Plus, because both films pointlessly withhold the reason why the couple split up, watching them back-to-back is often an exercise in dramatic redundancy.

All of that said, Her is such a well-drawn character sketch—with such a fantastic Chastain performance—that it practically justifies the whole experiment. Chastain plays Eleanor, who suffers a devastating crisis in her marriage and responds with a suicide attempt, which ends with her retreating to her childhood home and re-enrolling in college, where she tries to avoid seeing her needy husband, Conor. Benson indulges in some narrative clichés in Her—like having Eleanor be mentored by a wizened professor, played by Viola Davis, who helps her in her study of “identity theory”—but for the most part he steers clear of forced conflicts or epiphanies, and keeps Eleanor’s circumstances more down-to-Earth. Eleanor has hopes that living with her aloof, academic parents (well-played by William Hurt and Isabelle Huppert) will allow her to heal and reinvent herself in private, but instead she finds herself constantly under scrutiny, and questioning herself whenever she feels too happy or too blue. Ultimately, Her isn’t so much about how a woman responds to tragedy, but how other people respond to the woman’s response.

Him, on the other hand, is a mess, only partially redeemed by strong performances—including McAvoy as Conor, Bill Hader as his best friend/head chef, and Ciarán Hinds as Conor’s successful restauranteur father. The main problem with Him is that it takes the form of a generic indie dramedy about a hard-luck dude, desperate for a turnaround in his personal and professional life. The comedy isn’t that funny, and the drama relies on the too-familiar scenario of a man waiting for a woman to swoop in and fix him (regardless of what she wants for herself). Him does have a few scattered moments of Her-like insight and vitality, though. Benson and McAvoy are keenly attuned to the fundamental unfairness of Conor’s situation, as a man who loses the love of his life through no fault of his own. The best parts of Him deal with Conor’s uncertainty over what he’s meant to do next. Is he supposed to be the rom-com hero who goes after Eleanor and makes the grand gesture to win her back? Or does he need to focus on saving his business and shifting his attention to another female friend who’s ready to take their relationship to another level?

Overall, there’s so much honest ambition in The Disappearance Of Eleanor Rigby that it’s hard to fault it too much for the parts that seem too plain, or that don’t fit. Benson takes his cues from the old movie posters that decorate his characters’ walls—for films like Masculin Féminin and A Man And A Woman—and does his best to have Him and Her pay special attention to the differing perspectives of either side of a married couple, as each follows divergent routes to regaining control of their lives. The few shared scenes between Him and Her (the ones that show the same moments through Conor’s and Eleanor’s respective POVs) are brilliantly written, staged, and performed, sporting subtle changes. Watch only Her, and Conor comes off as a pushy interloper who wants to make Eleanor’s emotional journey all about himself. Watch only Him, and Eleanor comes off as irritatingly inscrutable, beginning the movie in a depressed stupor and then re-entering Conor’s life as a rejuvenated free spirit who listens to dance-pop and wants to go on little adventures.

The he-saw/she-saw gimmick of The Disappearance Of Eleanor Rigby is frequently affecting, though not as illuminating as it might’ve been, if only because the two leads spend so much of their respective movies apart—which means their ways of seeing the world and each other aren’t contrasted enough. Still, if nothing else, Benson’s experiment exposes the inherent weakness of most romantic dramas or comedies, which are incapable of balancing the needs of their male and female characters. In most romances, either her story is in service to his, or vice-versa. The Disappearance Of Eleanor Rigby puts them on separate tracks, asking—and never satisfactorily answering—whether the two main characters even need to share a story at all.