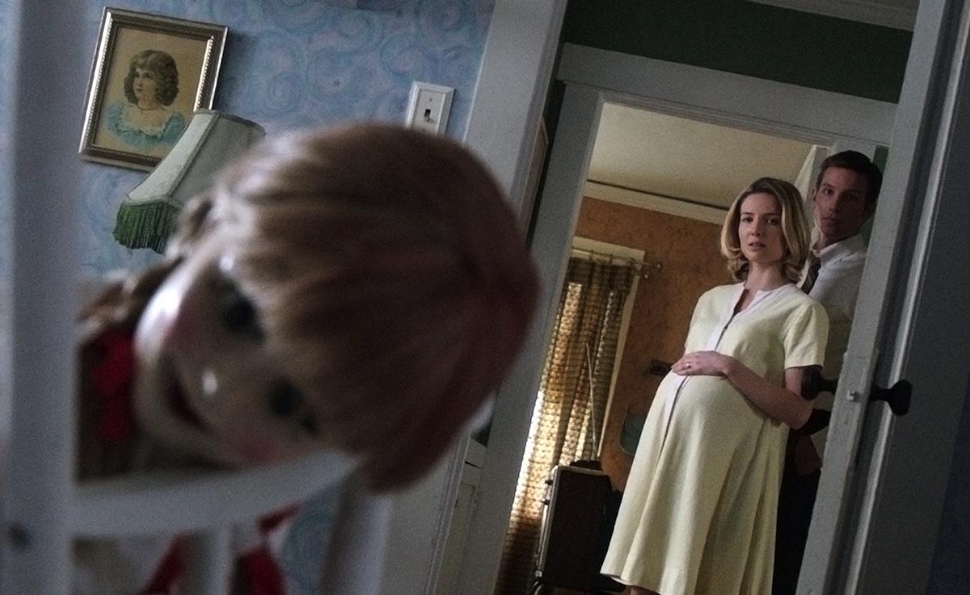 Sometimes it takes just a few seconds of screen time to make a star. Harrison Ford leaning back in the cantina in Star Wars, Julia Roberts singing along to Prince in Pretty Woman: These are moments that announce we’re seeing someone who’s going to be around for a long, long time. Last summer’s James Wan-directed horror hit The Conjuring had such a moment, and it didn’t go to stars Patrick Wilson, Vera Farmiga, or Lili Taylor, good as each of them are in the film. It belonged to a supporting player with such presence that all she had to do was sit in one place, grin, and stare. True, that’s essentially all she could do, being a doll. Introduced in The Conjuring’s opening scene as a subject of study by paranormal investigators Ed and Lorraine Warren, Annabelle is a doll who looks so unnervingly malevolent, she doesn’t really have to do anything beyond showing up in unexpected places and just being herself. Her horrifying, horrifying self.

Too undeniable a force to play second fiddle forever, Annabelle is back in a movie bearing her name and telling her origin story. But her intended showcase unravels as the film gets thinner and sillier. It begins well, though. Set one year before the Warrens’ first encounter with Annabelle, it largely takes place in an early-1970s Southern California so sunny and inviting, it seems like nothing bad could ever happen, especially to the nice central couple: John (Ward Horton), a young doctor, and Mia (Annabelle Wallis), his pregnant wife (whose character’s name doubles as an ominous homage to Rosemary’s Baby). They have a nice, new home in the suburbs, and a nursery that doubles as a home for Mia’s collection of antique dolls. There’s even room on the shelf for a new acquisition: a happy-looking, pigtailed beauty John gives her as a gift.

From there, things take a turn. In a tensely staged sequence, Mia and John wake up just in time to miss seeing the neighbors getting stabbed by their daughter Annabelle, a hippie in thrall to a Satanic cult. (Reminder: This film is set in early-1970s California.) Annabelle subsequently invades Mia and John’s home and dies clutching the doll, investing it with her twisted spirit.

Shades of Chucky and Child’s Play, of course, but Annabelle and its title character are otherwise the opposite of that wisecracking, murderous doll. Where Chucky runs around stirring up chaos, chaos just seems to happen around Annabelle. Director John Leonetti, cinematographer for The Conjuring and the Insidious films, knows how to build tension. Even before the trouble begins, he favors slow push-ins that suggest something bad will happen soon, even if it’s never clear what. Once Annabelle becomes possessed, the tension becomes almost unbearable, particularly in a scary scene that finds Mia watching television and sewing while popcorn pops on a stove that’s heated up without anyone turning it on. Distracted by a soap opera, Mia’s fingers get closer and closer to the plunging needle as the whirring of the machine keeps her from noticing the sound of popping corn, and soon enough, roaring flames.

It’s a beautifully crafted moment, and not the only one in Annabelle. Leonetti takes clear delight in setting up obvious scares, then delivering something else entirely. When he does deliver jolts, they feel earned. There’s real craftsmanship to the film, but it’s in service of a story that can’t quite support it. The film’s second half becomes repetitive and ultimately silly, as Mia protects her newborn child from Annabelle and the demonic forces around her with some help from a kindly priest (Tony Amendola) and an even kindlier bookstore owner (Alfre Woodard), both of them filled with advice on how to fight the occult. As Annabelle’s assaults become more direct, the film loses its subtlety, and the battle starts to get more literal. The film is more satisfying when it’s suggesting than when it starts showing.

Nonetheless, Annabelle emerges from it all unscathed—watching, smiling, never moving, or at least never moving when anyone can see her. The film is never scarier than when it just lingers on her. This might not be Annabelle’s finest moment, but she’ll have other shots. The camera loves that doll.