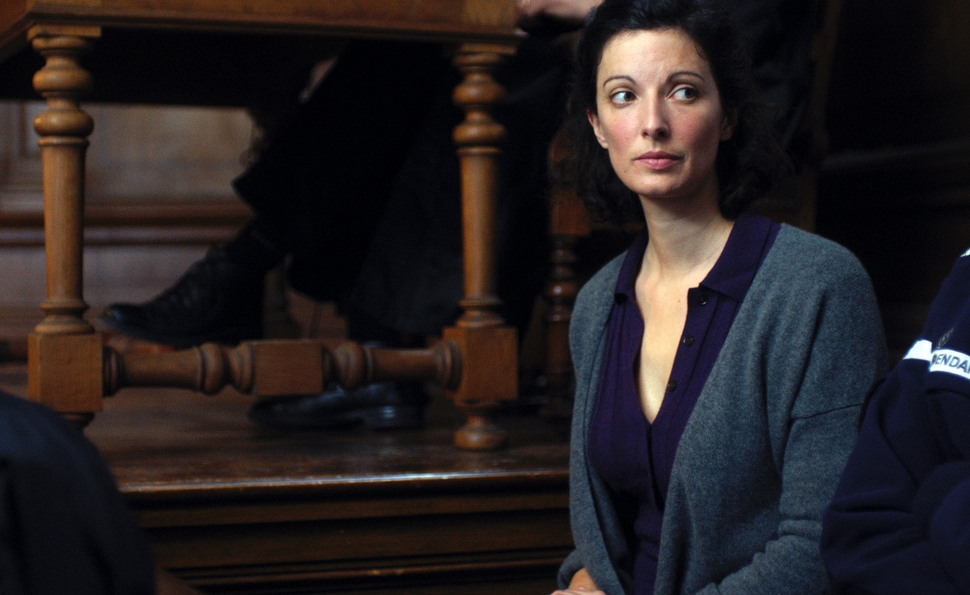 Georges Simenon’s novels have been a steady supplier of French suspense, dating back as early the 1930s and 1940s, when Jean Renoir and H.G. Clouzot both filmed adaptations, and more recently, serving the accomplished likes of Patrice Leconte’s 1989 Monsieur Hire and Cédric Kahn’s 2004 Red Lights. So when Mathieu Amalric’s The Blue Room, adapted from Simenon’s novella, opens in Academy ratio with the thundering Bernard Herrmann-esque score by Grégoire Hetzel, Amalric is priming his audience for an Alfred Hitchcock-inspired suspense thriller. (Or at least Hitchcock by way of Claude Chabrol, who also adapted Simenon twice with The Hatter’s Ghost and Betty.) The early scenes also bristle with erotic tension, going inside a hotel room where infidelity leads to nefarious plans. Yet as it settles in, the thrilling chutzpah of The Blue Room’s opening salvo gets lost in the intricate curlicues of the plot, which take away much of its illicit rush.

For years, Amalric has been one of the most exciting, unpredictable, and delightfully erratic actors in world cinema, but The Blue Room, his fourth directorial project, is uncharacteristically stifling. Some of that is by design: Much of the action takes place in cramped quarters from the title locale—a dark, shuttered, secret space that practically reeks of sex—to the interrogation room where Amalric’s Julien is accused of… something. Yet where the masters of suspense, like Hitchcock or Roman Polanski, can give such confines a delirious hothouse tension, Amalric’s direction is more pedestrian and flat, relieved mostly by a trio of great performances (including his own) and the satisfying noir mechanics of Simenon’s story.

The Blue Room quickly plunges into an atmosphere of eroticism and danger, as Julien and his mistress Esther (Stéphanie Cléau, who also co-scripted) alternate ferocious sex with conversations about what might happen if their relationship were ever brought into the light of day. When Esther bites hard into Julien’s lip, making it bleed, it’s a sign that she intends to mark him for more than the occasional afternoon rendezvous. Cut to the police inspector interrogating Julien about the events that followed, which involved something happening, and perhaps something else, and maybe more suspects than him, though that won’t be revealed for a while, either. The mystery comes together in flashbacks that flesh out Julien’s strained relationship with his wife Delphine (Léa Drucker) and Esther’s connection to money from a successful pharmacy business.

Though a taut 76 minutes, The Blue Room parcels out crucial information in stingy crumbs, which mostly hides revelations from the audience that everyone in the film already knows. But the withholding does allow Amalric to pick at the tension within Julien’s marriage to Delphine, which twice manifests itself in incidents that hint at his potential for harm, and get at the true meaning behind Esther’s words and actions. Amalric, Cléau, and Drucker are all compelling in their own ways, with the women serving as an especially sharp contrast in image—one the good wife, one the femme fatale—but both understanding more about Julien than he understands about them. Yet The Blue Room has the quality of a mystery that’s being recounted after it’s been solved; there’s some intrigue in knowing what exactly happened and figuring out motives, but no anticipation of what’s about to happen. It’s all postmortem, no urgency, case closed.