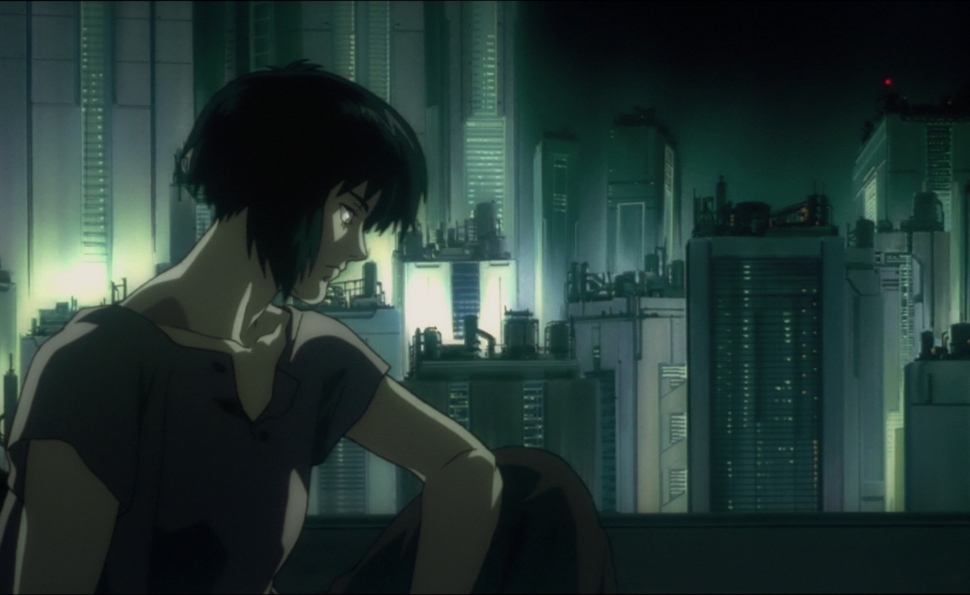 Ghost In The Shell

The 1995 anime science-fiction classic Ghost In The Shell is an ultra-violent, rocket-paced film—over and out in just over 80 minutes—but it’s a poetic one, too. After an opening sequence in which half-naked cyborg cop Major Motoko Kusanagi splits a criminal’s head and torso wide open with a super-powerful gun, the movie’s opening credits begin, interspersed with images of the heroine dreaming of her own body’s creation. In the background, Kenji Kawai’s score combines arrhythmic percussion and a vocal chorus, recalling something ancient, not futuristic. And then just before the story properly begins, director Mamoru Oshii holds on a shot of the city, seen through a window, surrounded in the frame by total blackness aside from two strips of white—one representing Kusanagi’s bed, and the other the light from an adjoining room. For a movie that’s so photo-realistic in its backgrounds and detailed in its character design, Ghost In The Shell is just as effective when it goes minimal, suggesting presence through absence.

But as the title implies, Ghost In The Shell is preoccupied throughout with matters of “presence” and “absence.” One of the big reasons Ghost In The Shell became the most popular anime feature internationally since Akira (the film that first introduced many audiences to mature Japanese animation) is that it gets into its viewers’ heads, by musing out loud about what defines a living entity. In the future-world where the film takes place, some people modify their bodies with electronics, and others—like Kusanagi—have their consciousnesses, or “ghosts,” projected into fully cybernetic bodies. Throughout the film, Kusanagi wonders what individuates her. Is it her experiences? The way other people treat her? And what does any of that mean if someone is capable of tampering with her consciousness?

The plot of Ghost In The Shell—taken in part from Masamune Shirow’s manga series—concerns a malevolent force known as Puppet Master, who has been “ghost-hacking,” implanting false memories and personalities into cybernetic “shells.” Much of the movie has to do with uncovering Puppet Master’s location and motives, which isn’t easy, since it doesn’t seem to have any preferred physical form. As Kusanagi gets closer to the truth, she seems to confirm a lot of her worst fears about the inevitable outcome of all this technological advancement: that a new consciousness could spawn from the ocean of data on the web, not unlike how primordial beings crawled out of the sea.

Oshii and screenwriter Kazunori Itô tell this story with enough wonky explanations to fill half a dozen Christopher Nolan films. (The dialogue plays better in the original Japanese with subtitles than it does in the English dub, where the chatter seems incessant.) But all the tech-speak and philosophizing is matched with pictures that carry Ghost In The Shell out of the realm of ideas. Kusanagi herself is a remarkable piece of visual design: curvy above the waist, devoid of sexual characteristics below, and either willowy or musclebound, depending on the situation. She’s fully fluid.

In a scene early in Ghost In The Shell, Kusanagi goes diving, then rises to the surface, approaching her own reflection in a shot that calls back to the opening credits’ images of her body being manufactured, while also wordlessly questioning whether she’s really unique. That’s another example of how Oshii breaks from the relentless pace of the film just to flip through some beautiful artwork. (And that artwork has inspired science-fiction filmmakers like James Cameron, Steven Spielberg, and most notably the Wachowskis, who copied some images and concepts directly from Ghost In The Shell for The Matrix.) Oshii and his team of animators used a cutting-edge-for-1995 hybrid of cels and CGI, which looks stunning even today in its stylishness, as the artists apply noirish light and shadow to a hard science-fiction story. Long monologues about the nature of being are all well and good, but when the characters stop talking (or murdering each other) and Oshii inserts a moody montage of their home city, intercutting shots of ordinary citizens with storefront mannequins, that’s when Ghost In The Shell gets its theme across most eloquently.

The new Blu-ray edition comes with a booklet containing an interview and two essays. Aside from that, this particular shell is ghostless.