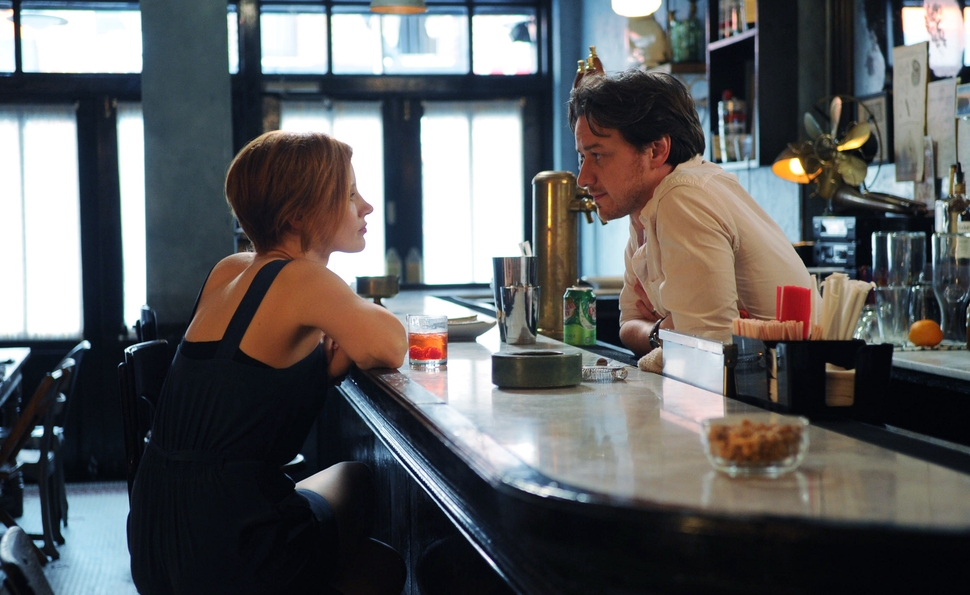 The Disappearance of Eleanor Rigby: Them

“Would you still love me if I couldn’t pay for dinner?” Conor (James McAvoy) asks Eleanor (Jessica Chastain) in the opening scene of The Disappearance Of Eleanor Rigby: Them. Her answer is never seriously in doubt. Soon they’re ditching the fancy restaurant in which they just dined, and rolling in each other’s arms in Central Park. But the first part of the question lingers over the entire movie, most of which is set well after that happy scene, in a less-happy future. Far less happy: Eleanor is next seen climbing a bridge to throw herself in a river, thinking herself unable to live with the worst of possible “if”s.

Apart from a blink-and-you’ll-miss-it moment in which another character hides a photo of Conor and Eleanor holding a baby when she—the daughter of Beatles fans with the surname “Rigby”—returns to her parents’ house to recover, the film withholds why it brought her to that desperate place to settle into a study of marital alienation. Or, more accurately, two studies. The writing and directing debut of Ned Benson, The Disappearance Of Eleanor Rigby originated as two features, subtitled Him and Her, each depicting half of the couple’s experience of separation. Them joins both perspectives into a single feature, and since it’s being released as its own film—and, full disclosure, The Dissolve was unable to see either Him or Her—it’s only fair to judge Them on its own merits, which are considerable, but too often obscured by seams.

In look and tone, Conor and Eleanor’s halves of the movie don’t match. Benson surrounds Eleanor with airy surroundings and bright colors. Conor spends his time in cramped quarters, most of them given a bluish tint. As Eleanor pieces her life back together, she has intense conversations with her musician mother (Isabelle Huppert), psychologist father (William Hurt), and librarian sister (Jess Weixler), a single mother who’s also returned to her parents’ house, if she ever left. Conor has testy exchanges with his best friend (Bill Hader), a chef at the struggling restaurant he owns, and terse conversations with his father (Ciarán Hinds), a star restauranteur who also just separated from his wife. They aren’t worlds apart—it’s not like half involves an alien invasion and the other is a buddy-cop movie—but the scene-to-scene transitions can feel jarring as Them switches between characters.

Those transitions also have a way of diluting the drama, making it hard for Them to build momentum. In what may be a bit too on-the-nose of a touch, Eleanor starts attending classes in identity theory taught by gruff-but-caring Professor Friedman (Viola Davis). Conor struggles with the financial realities of running a restaurant that only does decent business on Friday nights. The loss of their child and their disparate reactions to that loss become increasingly central as the film progresses, but even before the drama shifts in that direction, their other problems feel a bit trivial.

The film feels more thrown-together than thought-through, but the best moments transcend such problems. Benson directs with remarkable intimacy, staying close to his characters as they talk to one another, letting scenes play out without much cutting. He also gives everyone striking moments. As Eleanor listens to Professor Friedman make dark jokes about parenthood, she never lets on that she’s lost a child, but Chastain still finds a way to convey the discomfort and sadness even while keeping her face expressionless. McAvoy plays Conor as a man who’s learned to bottle up his feelings but is now discovering how little that skill will help him, and that no feelings stay contained forever, grief least of all. Hurt delivers a stunning, understated monologue recalling his most terrifying moment of fatherhood. It’s a shame such moments never quite fit together. But then again, maybe they were never meant to.

GoWatchIt: Buy. Rent. Stream The Disappearance Of Eleanor Rigby: Them