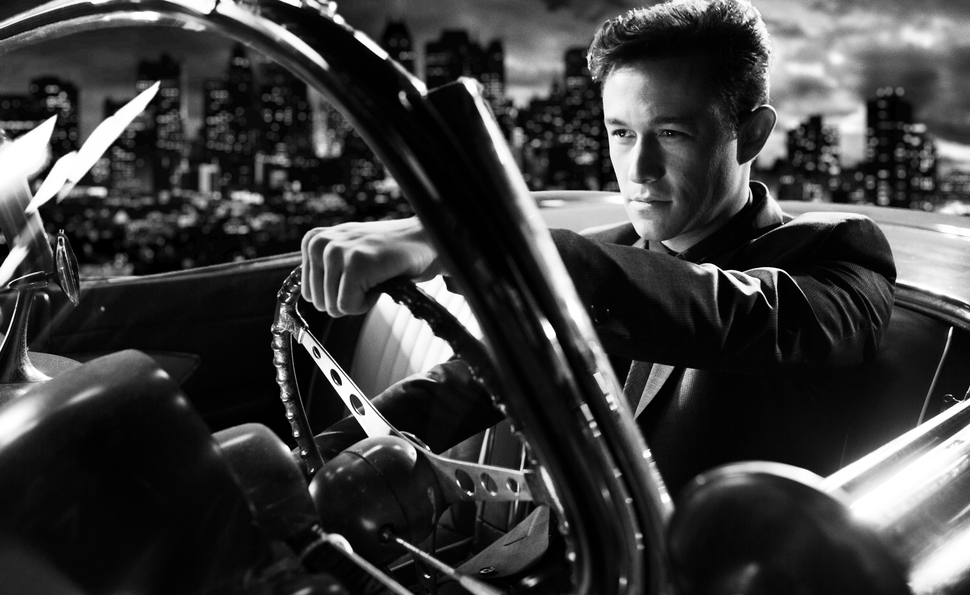 Sin City: A Dame To Kill For

It’s hard to overstate the influence of 2005’s surprise smash Sin City, a collaboration between director Robert Rodriguez and comic-book iconoclast turned filmmaker/public scourge Frank Miller. It dramatically altered the visual vocabulary of movies, proving conclusively that in the right hands, green screens could be an entire aesthetic, not just a tool for world-building and special effects. At the time, Sin City represented a bold, original fusion of comic-book stylization and live-action hard-boiled pulp—part blood-splattered graphic novel, part heavy-breathing neo-noir.

It’s similarly difficult to overstate the utter worthlessness and repulsiveness of the film’s late-in-the-works sequel, Sin City: A Dame To Kill For, and how hateful, stupid, and misogynistic it is in every facet of its storytelling. It’s so egregiously awful, so utterly without merit, that it makes its predecessor seem much worse by association. The film’s brainless, chest-beating brand of hyper-pulp calls into question whether Sin City was any good at all, or whether the novelty of its visuals and storytelling merely masked a howling nothingness at its core.

In the nine years since Sin City came out, its extensive use of green-screen has gone from being a thrilling innovation to a groaning cliché. So in a typical bit of counterproductive excess, Sin City: A Dame To Kill For attempts to make up for its lack of novelty by embracing another innovation that has similarly become a groaning cliché: 3-D. Everything that was fresh in Sin City feels tired, old, and more than a little pathetic in A Dame To Kill For, particularly Miller’s shtick, which hurls itself into an abyss of self-parody in its opening scenes and just keeps plunging deeper and deeper into caricature.

Mickey Rourke returns as Marv, one of Miller’s beloved noble brutes—a 300-pound human wrecking machine with a Frankenstein face. Marv has devoted his wasted life to protecting another holdover from the first film, Jessica Alba’s Nancy, one of those wonderful cinematic strippers who never get around to actually disrobing, though at one point, Nancy does playfully toss her cowboy hat into a crowd.

Marv has a doppelgänger in Dwight (Josh Brolin), another honorable brute with dirty hands and pure intentions. Together, Marv and Dwight come off as the righteously destructive Frankenstein twins, dual hard-boiled golems whose meaty paws are deadly weapons aimed at the villains out to exploit and degrade the lingerie-clad strippers, hookers, and femmes fatale of the film’s Basin City. Dwight is cursed to be deeply involved with green-eyed exemplar of womanly evil Ava Lord (Eva Green), the wickedest woman in a wicked city. Green’s near-constant nudity is just about the only thing that makes an impression here, despite wall-to-wall T&A tethered to a queasy, off-putting fetishization of violence, bloodshed, and brute force.

In Miller’s knuckle-dragging world, women are scantily clad vixens in bondage and fetish gear, either to be saved by noble men or killed without mercy once they reveal the full scope of their feminine evil. Men are beefy tough guys who whisper narration in raspy growls that aspire to hard-bitten macho-man poetry, but instead feels more like third-rate Mickey Spillane. A Dame To Kill For seems less like a sequel to a landmark film than bad Sin City fan-fiction from two men seemingly on a mission to make people feel terrible about enjoying their early work. How bad is Sin City: A Dame To Kill For? It’s worse than The Spirit, Miller’s own bottom-of-the-barrel solo directorial debut.

Miller and Rodriguez’s blunt, one-size-fits-all approach to storytelling and gender defeats the strength and diversity of an amazing cast. What’s the point of hiring a distinctive, sparky, original actor like Joseph Gordon-Levitt if you’re only going to push him into the same grubby tough-guy mold as every other male character? It’s telling that the only memorable character in A Dame To Kill For is seen only in pictures: Nick Stahl’s monstrous Yellow Bastard, who at least was lucky enough to die in the first film. True, Stacy Keach makes a bit of an impression as one of the film’s grotesque villains, but that’s probably because his character looks like Jabba The Hutt after a crash diet.

Some rare sequels take a lot of time to develop because they’re intent on getting everything right. Sin City: A Dame To Kill For seems to have taken nine years of development to get everything wrong. Sin City felt like the beginning of something new and exciting. Its deplorable, borderline-unwatchable sequel feels like an end—or at least the last gasp of a moronic, misogynist, and self-adoring sensibility just begging to be put out of its misery.