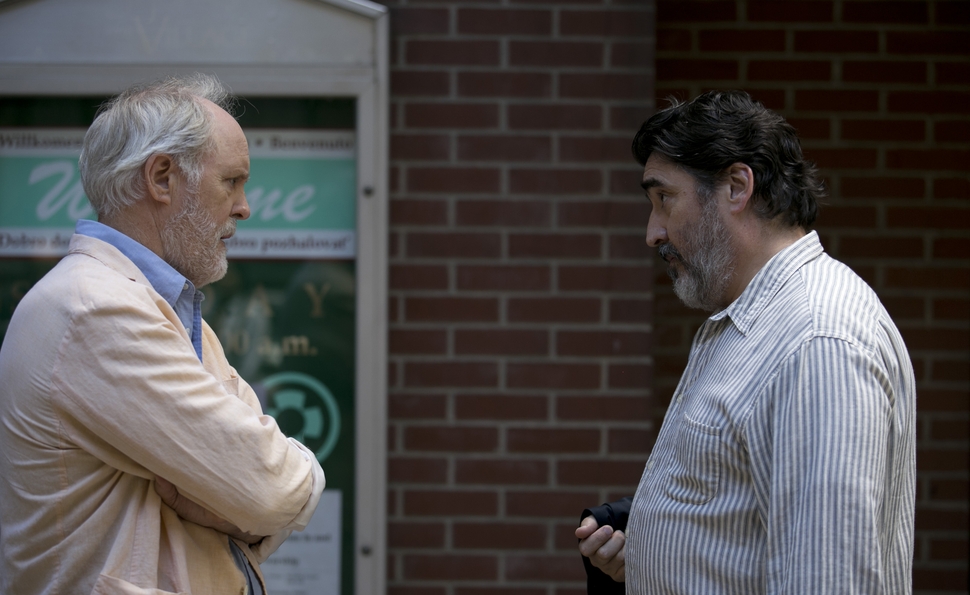 When Ben (John Lithgow) and George (Alfred Molina) wake beside each other in the opening scene of Love Is Strange, the moment has the look of routine. They don’t talk much, not out of anger, but because there’s no real need. They know how to stay out of each other’s way as they get ready. And they regard each other with a tangle of affection and familiarity that comes from loving the same person for years piled on years, not all of them easy. There’s a tension in the air, too, one that mounts in the next scene as the couple walks around their New York apartment, checking with a cook and a cleaning lady to make sure everything’s going according to plan because, after 39 years together, this is their wedding day. After a small outdoor ceremony, Ben, George, and their friends and loved ones return to the apartment for a celebration that includes Ben’s nephew Elliot (Darren Burrows) and Elliot’s wife Kate (Marisa Tomei), who gives an adulatory toast about her affection for the two men and her joy in seeing them together, both before and after they made their union legal. It’s a wonderful day. And from that point on, their lives start to go awry.

Returning from his honeymoon, George learns that even though everyone already knew about his relationship, his marriage to Ben has cost him his job as a music teacher at a Catholic school. As the primary breadwinner—the older Ben now collects Social Security after a career as a painter that never earned him much money—George doesn’t make enough to make ends meet. The men are forced to sell their apartment and depend on the kindness of those around them until they can find a better situation. With nowhere to go together, they separate: George moves in with supportive neighbors Ted (Cheyenne Jackson) and Roberto (Manny Perez), gay cops who don’t mind him crashing on their couch for a bit. Ben moves in with Elliot and Kate, taking up the bottom bunk in the room of their teenage son Joey (Charlie Tahan). It all goes well enough until it becomes apparent that there’s no quick fix that will allow the spouses to move back in together. George's nights turn sleepless as a result of his friends’ parties and late-night Dungeons & Dragons sessions. Ben starts getting in the way of his niece and nephew’s home life, and he recognizes it. “Sometimes when you live with people, you know them better than you care to,” he says, but it’s not like knowing this gives him anywhere else to go.

Directed by Ira Sachs, who co-wrote the film with Mauricio Zacharias (with whom he also wrote 2012’s Keep The Lights On), Love Is Strange draws heavily on Leo McCarey’s 1937 film Make Way For Tomorrow, another movie about an older couple separated by financial difficulties, and forced to part. Like the protagonists of that film, George and Ben fear becoming a burden to others in part because they know they have, through no fault of their own, become a burden to others. In one tense, funny scene, Ben keeps interrupting Kate, a novelist, as she tries to write, failing to recognize her annoyance until it’s too late. As in similar scenes in McCarey’s film, Love Is Strange shows how the blame for such tension rests on both parties, and that there’s no ill intent on either side, but that doesn’t make the frustration any less real.

Make Way For Tomorrow was made in part to call attention to the need for Social Security—though the program had become law by the time the film reached theaters—and Love Is Strange has an agenda, too, showing how still-acceptable prejudices undermine Ben and George’s legally recognized union, and illustrating how few protections there are for older people of any orientation without sufficient means. Yet any didactic purpose takes a back seat to the sharply observed relationships, a keen sense of how everyone fits into a changing New York, and a love for the protagonists that seems as deep as their love for each other, all of which Sachs accomplishes mostly by leaning back and watching situations play out. Though he frequently brings in striking outdoor images, particularly a rooftop vista where Ben goes to paint, he also has a gift for portraying spaces and the effects they have on those inhabiting them. The ease with which Ben and George move about their apartment contrasts starkly with the deliberate way they carry themselves in their adopted homes, and one early scene at Kate and Elliot’s shows how simply negotiating who’s going to spend the day where in cramped quarters can stir resentment.

Love Is Strange resembles Sachs’ remarkable 2005 film Forty Shades Of Blue, in the way he finds the drama in any moment without pushing too hard, and uses small details to bring relationships into focus. In one scene, Joey, an awkward kid who resents the way his uncle’s presence has intruded into his first real friendship, acts out in anger. Later, he still bristles when Ben asks him a question, then softens when he realizes Ben is talking to him in earnest, and not to make a point, or force him in a specific direction, unlike most of the adults in Joey’s life. In this moment, it’s less the dialogue than the way Tahan, in a promising performance, relaxes his expression that tells the story.

Neither Molina nor Lithgow are stranger to big performances, but here, they offer studies in restraint, underplaying dramatic moments in ways that make them all the more powerful. Love Is Strange keeps them apart for much of its running time, giving their scenes together that much more of a charge, especially a late-film reunion as they tour Greenwich Village and consider the life they’ve lived together, what’s been gained and lost along the way, and what lies ahead. It’s a wrenching sequence, not because Sachs manipulates emotions, but because by that point, Love Is Strange has deftly, quietly made viewers privy to Ben and George’s everyday intimacies, frustrations, and passions. Sachs conveys a sense of their entire long relationship and the history around it by depicting a difficult, late chapter whose uncertain outcome underscores what they mean to each other, and what would be lost if the world tore them apart.