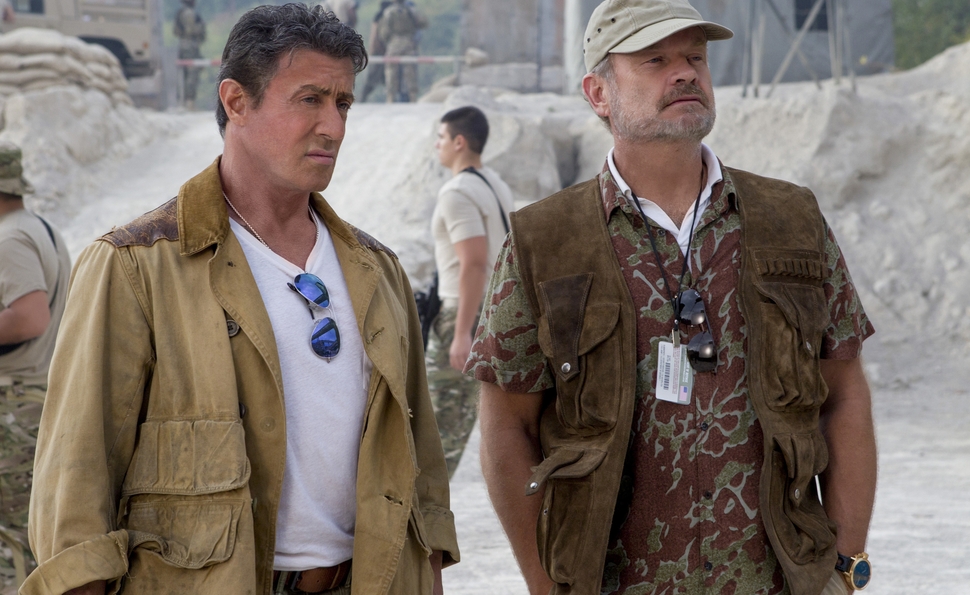 Competent, lucid action. That’s all anyone requires of The Expendables. No one expects Oscar-caliber writing or heartbreaking theatrics, just simple, clear excitement. And yet that one key need has proven surprisingly difficult for this franchise to manage. After three movies, The Expendables has collectively mustered less than a handful good setpieces, and the new installment, The Expendables 3, might contain the series’ worst action to date. The film actually has some solid elements—a couple of appealing supporting performances, a good villain, effective comic relief, and even some awkward but sincere attempts at subtext about its aging cast. But the fact remains: An Expendables movie should be fun, and for long stretches, this one isn’t.

Things get off to a loud but not particularly coherent start as Barney Ross (Sylvester Stallone) and his team of good-hearted, goofily named mercenaries (including Jason Statham’s Lee Christmas, Randy Couture’s Toll Road, and Dolph Lundgren’s Gunner Jensen) engineer the prison break of an old colleague, Wesley Snipes’ “Doctor Death” (which might not be his real name, but then again, in a world where “Toll Road” is someone’s real name, it might). Doc, a former member of the Expendables, is slightly cracked after eight years in maximum security. Asked what he was sent away for, Snipes quips “Tax evasion.”

The real Snipes just got out of jail for tax evasion, and it’s the first of many in-jokes and meta-textual references in The Expendables 3, which at times plays less like a movie than a feature-length supercut of ’80s action callbacks. When Arnold Schwarzenegger shows up later to join the fun, he smokes a stogie while regurgitating famous lines from Predator and Commando. Harrison Ford slips into Bruce Willis’ role as the Expendables’ CIA contact (Willis demanded too much money, and thus was proven truly expendable), and he gets to show off his hot-dog piloting skills from the Star Wars saga. Even Stallone starts quoting himself; the big one-liner in his final fight with his arch-nemesis is cribbed from Judge Dredd, of all places.

That villain, Conrad Stonebanks, is played by Mel Gibson in a memorably unhinged performance, like Martin Riggs if he’d never partnered with Roger Murtaugh, got kicked off the LAPD, and got into the international terrorism business. He interrupts all the back-slapping and jokes between the Expendables with demented glares and chilling threats. Stonebanks, it is quickly revealed, was Ross’ original partner in the Expendables, but the two had a falling-out over his questionable ethics. Now Stonebanks is an arms dealer, selling weapons to the highest bidders in the fakest European countries Stallone and co-writers Creighton Rothenberger and Katrin Benedikt can imagine. (The final showdown takes place in “Azmenistan,” a country whose only significant natural resource appears to be artisanal rubble.) The other standout member of the enormous cast is Antonio Banderas as a talkative soldier named Galgo who desperately needs a job and begs his way onto Stallone’s squad. This, too, may be real life intruding on fiction, but either way, Banderas steals every scene he’s in with motormouthed comebacks and the same operatic athleticism he brought to Robert Rodriguez’s Desperado almost 20 years ago.

Stallone’s own career in action movies dates back several more decades. For the last four years, he’s used The Expendables franchise as the cinematic equivalent of the Ferrari a rich guy buys to treat a mid-life crisis. As a man pushing 70, Stallone might be expected to at least acknowledge his encroaching mortality. But throughout the previous two Expendables, he never did; he fired faster, ran farther, and punched harder than co-stars literally half his age. Finally, in The Expendables 3, the inescapable truth begins to bubble to the surface. After Ross’ first attempt to bring down Stonebanks fails, he disbands his team. “At one time, you guys were the best. But nothing last forever,” he somberly tells his men. “We’re not the future anymore. Unfortunately, we’re part of the past.”

This is surprisingly introspective stuff for a movie that features a character named Yin Yang (Jet Li). But before Stallone can dwell on serious matters for too long, Ford’s character appears to send him after Stonebanks again, this time with a whole new team of younger, crazier Expendables—which is like the guy with the Ferrari deciding he’s too old to drive it, and trading it in for a Lamborghini instead. It’s unclear how working with a bunch of reckless, inexperienced yahoos benefits Ross (other than making him feel a little younger) or why that’s supposed to make it easier to catch Stonebanks (it doesn’t), but it does introduce a few more legitimate badasses to the cast, including professional boxer Victor Ortiz and current UFC Women’s Champion Ronda Rousey.

Each should be able to handle their share of stunts and pull off some incredible fight sequences. Unfortunately, it’s tough to say whether they did or not, since director Patrick Hughes chose to film almost all the action in The Expendables 3 in choppy, shaky close-ups. (The film’s PG-13 rating, a first for the franchise, may be a motivating factor in that decision.) Though it rallies for the big finale inside a giant crumbling hotel in Azmenistan, which does contain a few thrilling sequences, most of the 90 minutes that precede it are a jumbled, chaotic mess punctuated by surprisingly lengthy dialogue scenes. At 126 minutes, the film somehow feels both too frenetic and too sluggish.

The camaraderie between the ever-expanding supporting cast remains charmingly strong, and Gibson and Banderas are terrific additions—but fundamentally, this is an action movie with terrible action. Its verbal sparring is far superior to the physical kind, even if the attempts at deeper resonance about growing old never quite land. At the end of the film, the Expendables return to their favorite bar to share drinks and stories, and Neil Young’s “Old Man” comes on the stereo. Stallone hears it and smiles knowingly. For a moment, it looks like he may actually reach within himself for some kind of sincere and somber self-examination. Then the credits begin to roll and the movie’s over.