Kevin Bacon and 3 (3!) Sion Sono films help round out this year’s Fantasia Fest 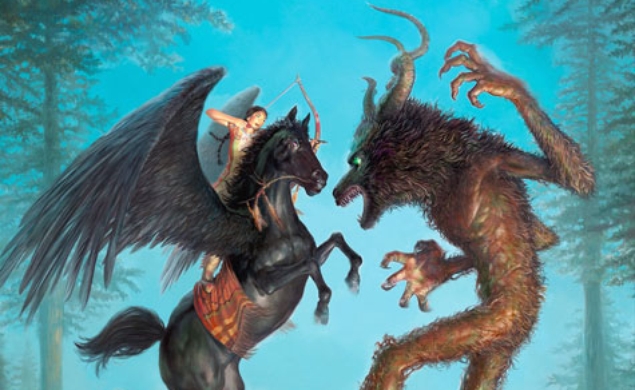 Since 1996, Montreal’s Fantasia International Film Festival has been screening some of the best and strangest in horror, action, science-fiction, animation, documentaries, and just about any geek-friendly variety of cinema a person could imagine. For the past few years, Fantasia has also become the home to one of the most thriving genre-film markets in the world, selling tomorrow’s cult hits today. And the festival has hosted special programs featuring older movies and samplings of various global scenes.

Here at The Dissolve we’re especially excited about this year’s lineup, because we (or, more accurately, I) will be up in Montreal later this month to cover the fest. This morning, the Fantasia programmers held a press conference to announce the last of the major events planned for this year, building on what was already an impressive slate.

Back in May, the festival named the Montreal premiere of Ant-Man as its July 14 opening-night film, and announced screenings of Michael Almereyda’s Experimenter (a quasi-biopic of Stanley Milgram starring Peter Sarsgaard), the acclaimed Ethiopian post-apocalyptic comedy Crumbs, the horror anthology Tales Of Halloween (featuring segments by Lucky McKee and Neil Marshall), the Spanish claymation fright-flick Possessed,  and the docu-essay The Visit (about the real people preparing for a possible alien invasion). Then in June, Fantasia added a plethora of films, including the latest from Ringo Lam and Takeshi Kitano, and an adaptation of Gillian Flynn’s novel Dark Places starring Charlize Theron and Nicholas Hoult.

For fans of Hollywood stars—and attendees who want to play their own personal game of “Six Degrees”—the big news today is that Kevin Bacon will be attending the Canadian premiere of the Sundance favorite Cop Car, which our own Mike D’Angelo described as having “the methodical, slightly scuzzy feel of early John Dahl thrillers like Red Rock West and The Last Seduction.” For cinephiles, even bigger news is the addition of three—count ’em, three—films by the eclectic, prolific Japanese director Sion Sono. Fantasia will be showing his manga adaptation Shinjuku Swan, the sunny family fantasy Love & Peace, and the satirical high-school splatter picture Tag.

Here are some other Fantasia titles to keep an eye on (with descriptions taken from the festival’s press release), including a few of the special retrospective screenings. Fantasia Fest runs from July 18 to August 6. The Dissolve will have a full report in early August; links are to our past festival write-ups of the films in question.

Attack On Titan
Hajime Isayama’s steampunk splatter-fantasy war opera has become one of Japanese entertainment’s biggest and most outlandish hits of recent years, at home and abroad. Now the hotly anticipated live-action film bursts furiously from the Fantasia screen, directed by top anime and tokusatsu talent Shinji Higuchi, whose history includes Gamera and Godzilla films, the Evangelion features, the 2006 remake disaster-piece Submersion Of Japan, and much more.

Cooties
We hope you got your shots, because Jonathan Milott and Cary Murnion’s Sundance/Stanley Fest sensation, Cooties, is about to infect Canada. This rambunctiously over-the-top comedy/horror film about a pack of schoolteachers fighting for their lives against swarms of savagely murderous virus-infected children stars Elijah Wood, Rainn Wilson, Alison Pill, and Jack McBrayer. It’s going to have audiences shrieking.

Ludo
Camera Lucida will have its most daring opening to date with the world premiere of Indian’s enfants terribles Q and Nikon’s new film. The director of the festival hit Gandu is back with a nightmarish fairy tale for adults. What starts like a Spring Breakers journey into Bombay’s night life suddenly morph into a frightening tale that echoes the Art Of The Devil series in terms of corporal horror. A groundbreaking film that destroys any notion of narrative and promises to leave deep marks.

Orion
Set far away after the end of civilization, Ansiel Norton’s brilliant Orion is truly something you have never seen before. Starring David Arquette, Lily Cole, and Goran Kostic, this post-apocalyptic epic quest features imagery that takes us into a brand new mythology. With fantastic costumes and sets as well as a unique use of the English language, Orion is a cult film waiting to be discovered. One of the most challenging pieces of work in this year’s Camera Lucida. This is what legends are made of.

Anima State
The most important film to come out of Pakistan in decades is also the film that will never get a theatrical release in that country. Director Hammad Khan (Slackistan) conducts an uncomfortable, in-your-face examination of his country through the tragicomic metaphorical tale of a man with a bandaged face going on a murder spree that nobody seems to notice.  Official Selection: Mosaic International South Asian Film Festival 2014.

Assassination
In 1933 Shanghai, a command to covertly assassinate the commander of the Japanese army is given to a top-notch female sniper—but a traitor informs Japanese authorities, who promptly send out a hitman to get rid of her! Get ready for the International Premiere of Assassination, directed by Choi Dong-hoon (The Thieves), a tense, explosive period thriller that lavishly recreates its bygone era and boasts a cast of Korea's biggest stars—including My Sassy Girl’s  Gianna Jun, The Chaser’s Ha Jung-woo, and The Housemaid’s Lee Jung-jae.

Lupin The Third
Gentleman thief Lupin, one of the most beloved characters in manga and anime, embarks on a wild and wicked escapade in this over-the-top, star-studded live-action spectacle that guarantees globetrotting good times on a grand scale! Official Selection: Sitges Fantastic Film Festival, Hawaii Film Festival.

(T)ERROR
Lyric R. Cabral & David Felix Sutcliffe’s extraordinary (T)ERROR is an intimate and unprecedented documentary portrait of a covert FBI informant which unfolds like a spy thriller, but amounts to a bold new perspective on the never-ending War on Terror. Winner of a Special mention at the Sundance Film Festival.

Raiders! The Story Of The Greatest Fan Film Ever Made
In 1982, three 11-year-olds in Mississippi set out to remake their favorite film: Raiders Of The Lost Ark. It took seven turbulent years that tested the limits of their friendship and nearly burned down their mother’s house. Jeremy Coon and Tim Skousen’s acclaimed doc is the inspirational story behind the making of what is known as “the greatest fan film ever made.” Official Selection: SXSW 2015, Hot Docs 2015.

The Arti: The Adventure Begins
A satisfying work of classic wuxia (superheroic swordfighter fare) peppered with playful humour and steampunk sci-fi flair, The Arti is arguably the most impressive piece of puppet cinema ever produced. It’s the latest from Taiwan’s Huang family, masters of traditional puppetry since generations, and their first feature film since the Fantasia hit Legend Of The Sacred Stone in 2000.

A Christmas Horror Story
A quartet of intertwined holiday terror tales from the team behind the Ginger Snaps franchise, with a cast that includes William Shatner, Julian Richings and one hell of a Krampus. There’s a gift for every horror fan under this tree.  Ho-ho-horror!

The Editor
Put on your black gloves and grab your straight razor—Winnipeg-based collective Astron-6’s brilliantly gory spoof of the giallo subgenre, those perverse 1970s Italian whodunits, is a classic Euro-horror satire, no matter how you splice it.  Official Selection: TIFF 2014, San Francisco International Film Festival 2015.

Nowhere Girl
Mamoru Oshii, creator of the classic Ghost In The Shell and recipient of the Lifetime Achievement Award at Fantasia 2014, returns to live-action cinema to tell the surprisingly intimate story of Ai, a bullied misfit at an all-girl college for the arts who hides violent secrets. Official Selection, Bucheon and Neuchâtel International Fantastic Film Festival, New York Asian Film Festival.

Port Of Call
In Hong Kong, a person goes missing every hour. This is the story of one of them. A gritty, grisly police procedural that unfolds into a careful yet caustic meditation on human nature, with camerawork by Christopher Doyle (In The Mood For Love, Chungking Express, Hero). Selected at Hong Kong Film Festival, Udine Far East Film Festival, New York Asian Film Festival and BiFan.

Tangerine
It’s Christmas Eve in Tinseltown and transgender hooker Sin-Dee is on a madcap mission to get to the bottom of a scandalous rumour. An uproarious, naturalistic comedy (shot entirely on an iPhone!) with energy and style to spare, Tangerine ranks among the most significant independent American breakouts in recent years. Official Selection: Sundance 2015.

The Reflecting Skin (1990)
We're all familiar with the prairies as a pastoral landscape of bountiful crops and quaint farmhouses, but if you're eight-year-old Seth Dove, it's also a nightmarish world of murdered children, parental madness and day-walking vampires. Fantasia is proud to present the premiere public screening of a new 2K restoration of Philip Ridley’s dark, poetic masterpiece, painstakingly supervised by the filmmaker himself to create the definitive visual representation, above and beyond what was possible at the time of The Reflecting Skin’s original theatrical release. Special 25th Anniversary screening.