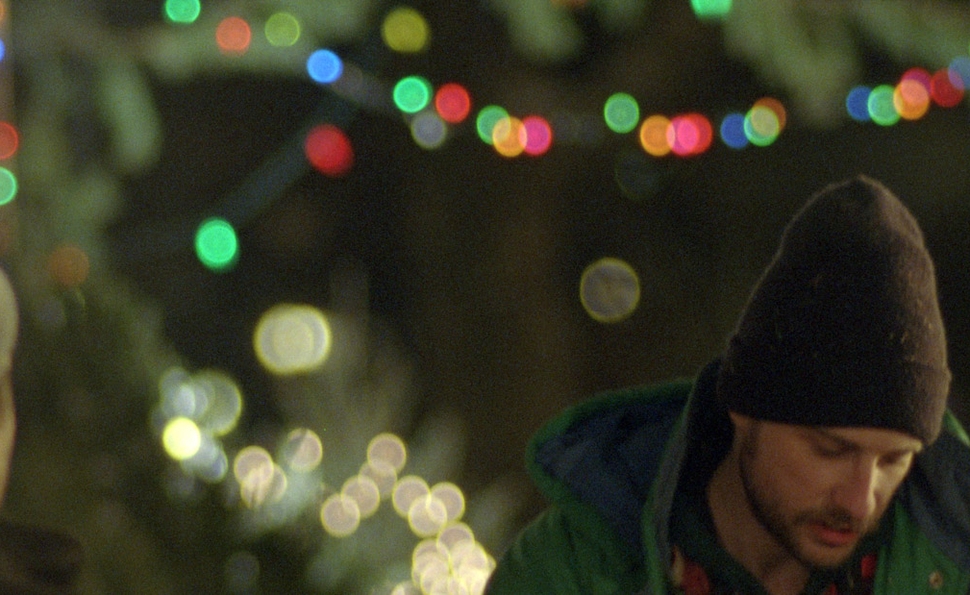 Day 6: The limits of likability

Complaining that a character in a movie isn’t “likeable”—or, arguably worse, “relatable”—often reveals a paucity of imagination on the part of the complainer. After all, it’s only a couple of hours, give or take; spending such a brief amount of time in a foreign headspace isn’t that arduous, and can be illuminating. All that really matters in a character-driven film is that the people onscreen are interesting. Even insufferable and/or repellent protagonists can fascinate, under the right circumstances. The only dealbreaker is bland.

That’s why I found Results, the latest effort by Andrew Bujalski, such a disappointment. Bujalski’s previous film, Computer Chess (which screened here two years ago), was a major leap forward for him, suggesting that he was ready to leave the constrictive “mumblecore” label far behind. Results doesn’t exactly see him return to the inarticulate fumbling of Funny Ha Ha and Mutual Appreciation, but its glossier, comparatively star-studded portrait of emotional stagnation nonetheless feels like a step back. The film’s typically scattershot narrative concerns two personal trainers, Trevor (Guy Pearce) and Kat (Cobie Smulders), who had a fling shortly after Kat was hired a couple of years back, but are now just slightly combative friends. Into their Austin gym one day walks an out-of-shape multi-millionaire named Danny (Kevin Corrigan), who states his fitness goal as being able to take a hard punch in the stomach or jaw. Kat takes Danny on as a client, doing her best to deflect his blunt romantic overtures, and his presence eventually provokes both her and Trevor to reassess the nature of their personal and professional relationship. While all three actors do solid work, however—Pearce uses his Australian accent, which the movie never feels any need to explain—only Danny is sharply drawn and memorable, and even his behavior, which mostly involves blithely throwing money at every problem, feels cutely constructed rather than incisively observed. Had Bujalski played this scenario for high comedy, it might have caught fire. Instead, he keeps things as low-key and shambolic as he always does, which places demands on Kat and Trevor that his wordy but oddly mundane screenplay fails to meet. In the end, these people and their issues just aren’t that compelling. A few hours later, I’m hard pressed to recall much about them.

By contrast, I can recall any number of indelible moments experienced by Noel—that’s a character, not my trusty colleague Noel Murray—in Charles Poekel’s lovely, delicate Christmas, Again. The film’s premise echoes that of a thoroughly mediocre dramedy from a couple of years ago, All Is Bright, which starred Paul Giamatti and Paul Rudd as two sad sacks living in a trailer and selling Christmas trees on the streets of New York. Poekel reportedly did that job himself for several years, and he’s opted not for a buddy flick but for a glancing, impressionistic sketch of loneliness and fleeting connections. Noel (Kentucker Audley) is pining for an ex-girlfriend who used to work alongside him over the holidays, but not much is made of this—we never learn why they broke up, or much of anything else about her. Her absence is merely context for the feeling of commingled warmth and envy Noel feels as he delivers trees to happy couples and other folks clearly not suffering from seasonal affective disorder. There’s a sliver of a story, kicked off when Noel finds a young woman named Lydia (Hannah Gross) passed out cold on a park bench and takes her into his trailer to sleep it off; their tentative friendship very slowly builds to a poignant conclusion. But Lydia disappears for long chunks of the movie, which is primarily just interested in watching Noel huddle up close to a space heater in his trailer, or patiently explain the difference between a Douglas fir and a Balsam fir (“You’re probably thinking of balsa wood”), or try to find the person who ordered the tree in the middle of a jam-packed house party. Poekel’s atmospheric direction nicely conveys the melancholy mood, but Christmas, Again wouldn’t work without Audley, who’s given very little dialogue—Noel rarely speaks except to do business—but manages to silently suggest a churning sea of stifled emotion. He makes this stoic, often kinda dickish loner into mesmerizing company.

Then there are Sin-Dee (Kiki Kitana Rodriguez) and Alexandra (Mya Taylor), the two transgender hookers at the center of Sean Baker's hilariously hyperactive Tangerine. Let me confess immediately that the opening minutes of this movie had me itching to flee the theater, in order to escape what felt like a frontal assault. Both women (played by actual transgender actors) are several orders of magnitude larger than life, with Sin-Dee in particular so relentlessly loud and logorrheic that she makes Divine seem like Andy Devine. (She also wrests the world record for calling people “bitch” from Breaking Bad’s Jesse.) What;s more, Baker (Starlet), who shot the entire film on an iPhone 5S outfitted with an anamorphic lens adapter, constantly sends the camera (or the phone, rather) hurtling toward or away from its subject, further amping up the energy level via rapid-fire cross-cutting once Sin-Dee and Alexandra temporarily go their separate ways. Over time, though, these passionate, street-smart whirligigs grew on me, and by the end I was surprised by how fiercely protective of their fragile happiness I felt. The characters didn’t change at all—I changed. Unfortunately, I never quite came around to Tangerine's male lead, an Armenian cab driver named Razmik, played by Baker regular (and producer) Karren Karagulian. Razmik is initially seen just picking up random amusing fares, and while his story eventually intersects with that of Sin-Dee (who's trying to track down her pimp, furious after hearing that he's been sleeping with a cis woman) and Alexandra (who's dealing with a prostitute's usual endless series of hassles), he seems on hand mostly as something else for Baker to cut to now and then, so that the film’s rhythm doesn’t get too ping-pongy. In any case, the two irrepressible women, in all their violence and compassion, were all Tangerine needed. Did I like them? Not at first. Did I relate to them? Not in the least. Did that matter? Not one iota.

Also seen: While Noel took on The Stanford Prison Experiment the other day, I was watching its historical-procedural cousin, Experimenter: The Stanley Milgram Story. Brilliantly directed by Michael Almereyda (Nadja, the Ethan Hawke modern-day Hamlet, Happy Here And Now), it’s riveting when recreating Milgram’s controversial obedience experiments, in which roughly 65% of the subjects administered potentially fatal electric shocks (fake, unknown to them) to a stranger because an authority figure insisted that they must. However, Almereyda’s invigorating use of direct-camera address and blatantly artificial photo backdrops—both of which recall 1990 foreign-language Oscar nominee The Nasty Girl, one of the great forgotten films of the last 25 years—can only disguise the film’s fundamentally expository nature for so long. Apart from rehashing decades’ worth of arguments for and against the experiments, Experimenter has no particular perspective on Milgram or his work; in its latter half, it starts to resemble a conventional biopic, despite its formal brio.

More consistently audacious, if equally rickety, is Jennifer Phang’s sci-fi drama Advantageous, which plays as a feminist gloss on the John Frankenheimer classic Seconds. Co-written by lead actor Jacqueline Kim (Charlotte Sometimes), whose open, expressive countenance makes the narrative that much more upsetting, it applies heady ideas and surprisingly good visual effects (given the low budget) to the story of a single mom whose efforts to carve out a good life for her young daughter, in a future world growing more and more hostile to women, leads her to make a horrific sacrifice. Phang expanded the film from a short she made (currently available here), featuring the same basic cast (including James Urbaniak), and its biggest problem is that it just doesn't have nearly enough material to sustain a feature. Phang and Kim add subplots and a whole lot of fascinating, cryptic background detail about their hypothetical future, plus a juicy role for the great Jennifer Ehle, but Advantageous still often feels like it’s stalling.

Finally, there’s Cop Car, from the Park City At Midnight section, which turned out to be something other than expected. “Two 10-year-old boys steal an abandoned cop car,” reads the simple festival logline, and I’d imagined a goofy comedy—something like a pre-adolescent version of Let's Be Cops, maybe. While the movie begins with plenty of humor, though, it turns increasingly dark after it’s revealed that the car belongs to a corrupt sheriff (Kevin Bacon) who was in the middle of burying a body in the woods, having left another body in the trunk. Director Jon Watts, who co-wrote the script with Christopher D. Ford (Robot And Frank), gives Cop Car the methodical, slightly scuzzy feel of early John Dahl thrillers like Red Rock West and The Last Seduction; rather than a constant joyride, it’s the kind of movie that’ll stop dead for five minutes to watch Bacon’s sheriff repeatedly try to unlock a car door with his shoelace. By the climactic showdown, the initially jovial tone has been obliterated, replaced by ghoulish quasi-humor in which the two boys casually toss loaded guns around with no understanding of how a safety works. All the film is missing is a powerful ending—one that slams it shut rather than just trailing off, uncertain…

Tomorrow: Noel Murray on unexpected festival smash Me And Earl And The Dying Girl.