Spy giddily motorbikes away with the weekend box-office 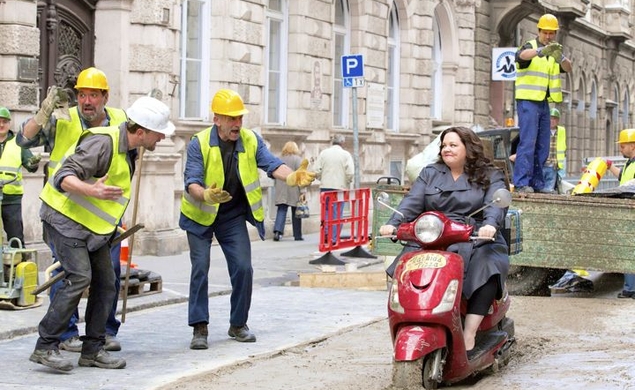 It’s no Aquaman, but the Melissa McCarthy-starring Spy ran away with the box-office competition during its first weekend in release, pulling in an estimated $30 million and handily nabbing the top spot from a very mixed bag of summer blockbusters (and, given some of said blockbusters’ performance, it might be time to deem them wannabe blockbusters). The Paul Feig-directed comedy is McCarthy’s third opener to crack the $30 million mark during its first week—both The Heat and Identity Theft also opened above $30 million, and both went on to make at least $130 million domestically—and a nifty bounceback from last year’s Tammy, which made $21 million in its first weekend, though it failed to even pull in $85 million domestically for its final take.

Are women funn—you know what, we’re not doing that here (we are not ever doing that here). We all know women are funny, and Melissa McCarthy is very funny.

The weekend’s other big new openers couldn’t overtake McCarthy and her Spy, but they also couldn’t take down The Rock and his San Andreas, now in its second week at the box-office. The disaster film added another $26.4 million to its take, bringing its total domestic gross to around $92 million. Globally, the film has already surpassed the $150 million mark. People love The Rock, and they also love movies that destroy San Francisco. (I happen to love both.)

Insidious: Chapter 3 managed to scare up third place, earning $23 million in its first weekend, a sizable drop-off from Insidious: Chapter 2, which pulled in over $40 million when it opened in 2013 (and was number one to boot). Still, the mid-budget horror franchise has made over $160 million at the domestic box office in three films, and now appears to be taking aim at the $200 million mark. Scary good!

(Insert GIF of Ari Gold writing an email that just reads “FUCK YOU!!!!” No, really, we have that GIF.)

In a tricky bit of Hollywood magic and opening day mess-around, the long-anticipated Entourage feature actually opened on Wednesday (why not? Wednesdays are a cool day for hanging with your bros, too), but even if the weekend numbers accounted for that two-day boost, Entourage still sputtered into fourth place. It’s not a Medellin performance, but jeez. The film has so far made $17.8 million, with $10.4 million of that coming from the weekend alone. By way of comparison—an imperfect one, but the best we have—HBO’s other big series-turned-movie, Sex And The City, opened in first place in 2008 with over $57 million in domestic returns, a performance that fell in 2010, when the film’s sequel only pulled in $30 million in the same frame. Guess everyone is going to hold off on that The Newsroom feature.

Elsewhere, Mad Max: Fury Road passed the $300 million mark globally, and is currently riding into Valhalla, shiny and chrome, with $307.8 million after just a month at the box-office. Similarly, Furious 7 zipped past the $350 million (just domestic!!) mark this weekend, good enough for the franchise feature to earn a staggering $1.5 billion worldwide. Vroom vroom and such.

Cameron Crowe’s beleaguered Aloha tumbled all the way down to the number nine spot, earning $3.3 million in its second week. The film is currently Crowe’s lowest-earning narrative feature, and though it sits just below Singles on the chart, a little inflation adjustment puts Aloha below both Singles and Elizabethtown.

It was a solid weekend for limited releases, however, thanks to films like Love & Mercy, Testament Of Youth, Dil Dhadakne Do, and A Pigeon Sat On A Branch Reflecting On Its Existence. As is often the case with well-received limited releases, the films topped the charts for best per-theater average. In just four theaters, Testament Of Youth made $53,000 for a $13,250 average (enough for the top spot), while Pigeon made $19,000 in just two theaters (good enough for second).

This weekend will likely be all about Jurassic World, so ready your bowls of Jello and cans of Barbasol accordingly.