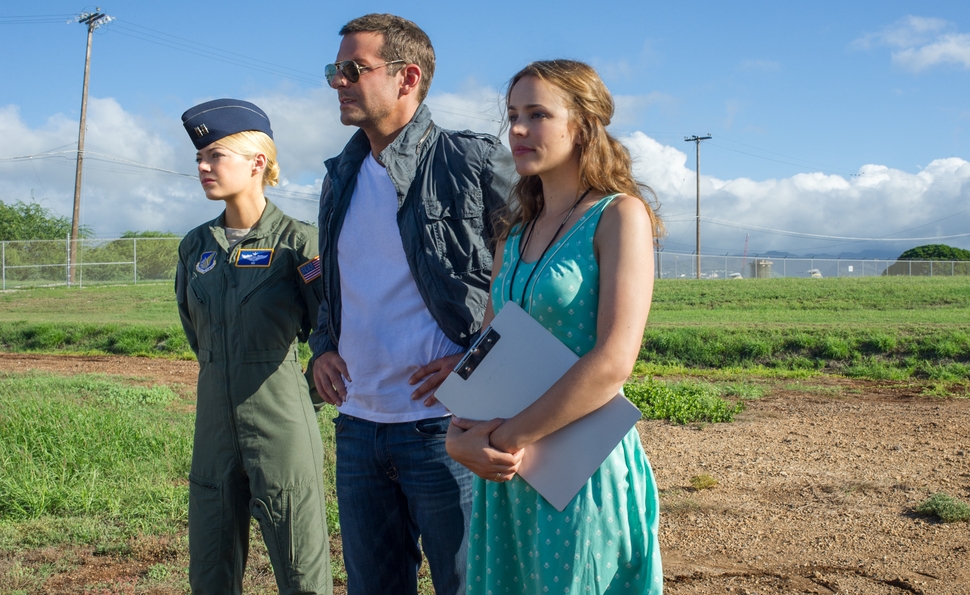 There’s a lot of heart in Cameron Crowe’s latest film, Aloha, but a heart alone isn’t enough to keep anything alive. Characters exchange earnest looks and talk to each other about their deepest feelings. The camera pushes in at just the right moment to heighten the emotion. The soundtrack finds exactly the right pop song to accentuate the scene. And it all aches with sincerity, the sort of rare sincerity that can, in some circumstances, neutralize qualms about more mundane concerns. The film, in other words, features much that has worked for Crowe in the past, and consequently, a few moments of real magic. But it’s magic with no direction. It sparkles for a moment, then fades.

It’s also a huge mess. Viewers can be forgiven for feeling in over their heads before the movie even gets going, as Brian Gilcrest (Bradley Cooper) breathlessly lays out a voiceover narrative about how life has brought him back to Hawaii after a stint in the Middle East. Once an ambitious military man prized for his technological expertise, Gilcrest left the armed services to go to what he calls “the gray side” after the 2008 economic collapse. That’s meant working as a private contractor for billionaire Carson Welch (Bill Murray) eager to take advantage of the privatization of space. In the past, the job has taken Brian to Kabul, where something bad happened—something clarified later, sort of. Currently, it requires him to secure the blessing of the leader of the Nation Of Hawai’i (Dennis Bumpy Kanahele, as himself) before ground can be broken on a new base.

Accompanying him on this journey is Allison Ng (Emma Stone), a fighter pilot who boasts of her one-quarter Hawaiian ancestry. Her boundless energy is powered by an unquestioning enthusiasm for what the military can do to improve the world, as long as it sticks to its lofty principles. Allison’s idealism stands in stark contrast to Brian’s cynicism. To underscore this, Crowe gives her lines like, “You’re cynical, I get it.” It’s hard to miss. And as she slowly wins his heart and salves his soul, it’s hard not to be reminded of how this dynamic played out in better Crowe films like Jerry Maguire and even Elizabethtown, which, for all its flaws, never felt half as forced. Cooper and Stone are both winning actors, but the script reduces them to playing types. If nothing else, Elizabethtown built a remarkable sequence around an all-night phone conversation that captured the feeling of new love—the bottomless hunger for information, and the way time disappears as two people get to know each other. Aloha simply throws its leads together, gives them some banter—some of it memorable, most of it not—and assumes a coherent relationship will take shape.

It doesn’t. But it also has a lot of competition from subplots muscling for screen time. Professional wounds aren’t the only thing keeping Brian from throwing himself into a relationship with Allison: His return to Hawaii also reunites him with Tracy (Rachel McAdams), an old girlfriend now married to John (John Krasinski), a pilot who takes the “silent” part of the “strong, silent type” to relationship-damaging extremes. Tracy has a daughter and a son. The former’s conception times out suspiciously close to her break-up with Brian. The latter seems to be on hand mostly to provide tidbits from Hawaiian mythology that could rhyme with the action of the film, but don’t. Then there’s the billionaire, whose impending satellite launch might have a hidden agenda.

As Aloha flits from romance to intrigue to Hawaiian politics to outer space, it risks incoherence. Pre-release controversy has focused on the film’s apparent white-washing of Hawaii, but leaving aside the dubious casting of Stone as a woman of Eurasian heritage, Aloha tries to engage with the tricky issue of Hawaiian identity by spending a lot of time with Kanahele and the Nation Of Hawai’i, which advocates for Hawaiian independence and treats the presence of the U.S. as an occupation. (Kanahele wears a T-shirt reading “Hawaiian by birth. American by force.”) Then, after a while, it mostly forgets them. It similarly raises, then drops, a discussion of what the privatization of the military means for the future of American foreign policy as the question of whether or not Brian is father to Tracy’s oldest child comes into and falls out of play.

There’s a lot going on here, but nothing gets center stage for long. Consequently, the film feels both overstuffed and undernourished, as if it had either been rushed to the screen or pared down from a much more ambitious film about love, Hawaii, space, and how we live now. Whatever Crowe’s ambitions, Aloha feels like a tropical transplant of past work, and an unfortunate demonstration of the law of diminishing returns. It’s still a Crowe film, though, and there’s an intangible quality that keeps it likable even when it’s not particularly good, animating it as the dialogue lands with a thud, the chemistry fizzles, and ultimately moral plays as more corny than true. Call it heart. But also call it insufficient.