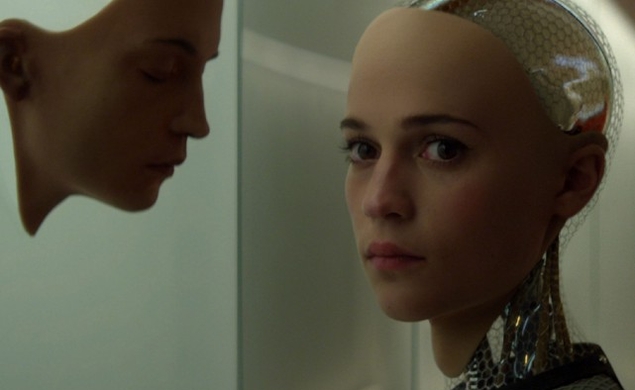 If you’ve seen Ex Machina, you’ve likely fallen under the spell of Alicia Vikander. Though I was lukewarm on the movie itself, I still can’t stop thinking about the particular frequency Vikander was vibrating on. As the film’s, er, robot protagonist, she’s totally mesmerizing—she’s lost somewhere in the Uncanny Valley, vacillating between eerie, choreographed imitations of human grace and real, transcendent emotion. She also manages to look gorgeous with a see-through torso and a wire-mesh head, so there’s that.

Fortunately for me and all over Vikander Vikings (k, still workshopping this fandom title), Vikander is about to be everywhere. She’s set to star in at least six films over the next nine months, including The Man From U.N.C.L.E., The Danish Girl, Tulip Fever, The Light Between Oceans, Testament Of Youth, and Adam Jones. According to an item in THR today, Vikander will also star in The Circle, based on Dave Eggers’ 2013 novel of the same name about a morally dubious company that’s slowly taking over the entire technological world but it’s not Facebook or Google nope nope nope.

We first told you about The Circle last year, when Tom Hanks confirmed he’d produce and star in the film and James Pondsolt, of Smashed and The Spectacular Now, signed on to direct. The story is particularly timely but, again, not about any real technology company, Dave Eggers hasn’t even been to any technology companies, haha, everything’s great and we’re all fine! Here’s the rundown, according to publisher McSweeneys:

“Set in an undefined future time, The Circle is the story of Mae Holland, a young woman hired to work for the world’s most powerful internet company. Run out of a sprawling California campus, the Circle has subsumed all the tech companies we know of now, linking users’ personal emails, social media, banking, and purchasing with their universal operating system, resulting in one online identity and a new age of civility and transparency…Mae can’t believe her luck, her great fortune to work for the most influential company in the world—even as her life beyond the campus grows distant, even as a strange encounter with a colleague leaves her shaken, even as her role at the Circle becomes increasingly public. What begins as the captivating story of one woman’s ambition and idealism soon becomes a heart-racing novel of suspense, raising questions about memory, history, privacy, democracy and the limits of human knowledge.”