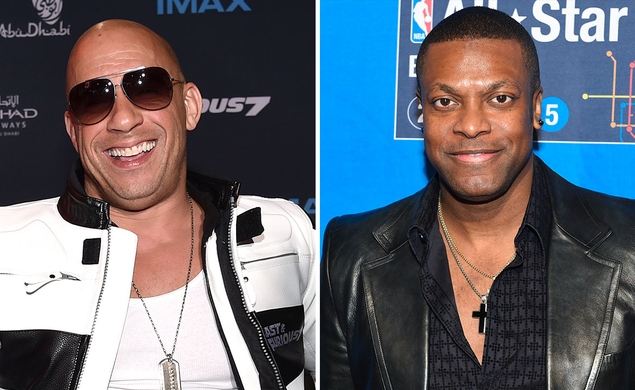 Ang Lee has assembled quite a diverse lineup for his upcoming war satire Billy Lynn’s Long Halftime Walk. He first made waves by tapping pristine newcomer Joe Alwyn for the film’s title role. Then, he landed comedy institution Mr. Steve Martin to appear in an unspecified supporting role, an addition that may prove helpful in managing a comedic tone for a director steeped in crushing drama. Last week, Kristen Stewart continued her recent auteurist hot streak by joining the cast. Garrett Hedlund and Broadway import Ben Platt (Pitch Perfect) will fill out this gloriously incongruous cast, and a new report today from Deadline brings news of two more perplexing additions to Billy Lynn.

Vin Diesel and Chris Tucker will appear in the film, bringing their car-related expertise to the adaptation of Ben Fountain’s novel. Unfortunately, the Deadline item does not specify what roles Diesel and Tucker will play in the film. Fortunately, we do have an outline of the film’s plot and a flair for baseless speculation, so let’s give it our best shot!

What’s known at present is that Billy Lynn centers on the men of Bravo Company, a military squad that survives a gory battle during the American invasion of Iraq and returns home to a hero’s welcome. But tensions within the group, combined with the mental stress of a looming return tour in Iraq, have taken a toll on the soldiers. The internal pressure comes to a head in a climactic appearance at the halftime show of a Thanksgiving Day football game. Throughout the film, Billy flashes back to his traumatic experiences Over There.

So how do Chris Tucker and Vin Diesel fit into this? Diesel’s definitely got the build of a military man; adding him to the roster of Bravo Company would hardly be a stretch. Tucker could fit in as well, his twitchy energy a valuable addition to the comedic side of what sounds like a decidedly dark comedy. The trouble, then, would be that that doesn’t sound like a role that’ll lend itself to car-skyscraper collisions. Why would a casting director go through all the trouble of getting Vin Diesel if he’s not even going to drive a car through two separate skyscrapers?