Furious 7 made a lot of money 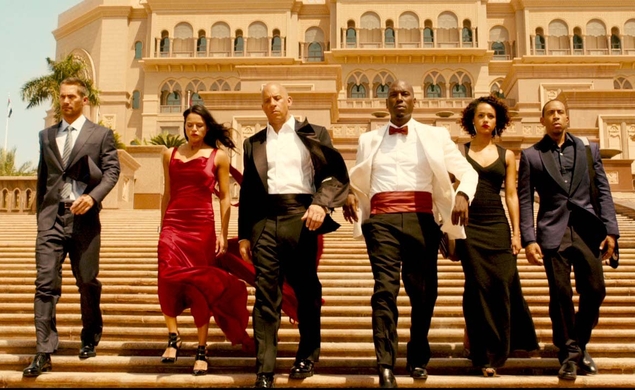 The Fast And Furious franchise easily lends itself to all kinds of high-octane puns, especially when it comes time to expound on the massive amounts of money the series pulls in at the box office, from commentary about “peeling away” with cash or “zooming past the competition” and probably even something involving carburetors (“a well-oiled machine”? are carburetors oiled?), but sometimes it’s best to leave that stuff in the dust and cross the finish line with something simple. Oh, oops. In any case, let’s make it plain: In its first weekend at the box office, Furious 7 made a lot of money.

How much money? The kind of money that a group of ragtag—but still very lovable!—criminals would plot to steal using a wild, improbable, but mostly awesome-looking plan to heist from some vague bad guys. It’s that kind of money. Heist money.

In its opening weekend, Furious 7 made $143.6 million in domestic dollars alone, bolstered by an additional $240 million in foreign markets that don’t even include movie-going powerhouses like China, Russia, and Japan. This giant opening places Furious 7 among opening all-timers like The Avengers, Iron Man 3, and The Dark Knight Rises, and it currently ranks as the 10th-biggest wide-opening film ever (domestic only). The film is also the No. 1 opener for all April films, all Easter weekend films, and all Fast And Furious films. In fact, in just one weekend, the film has already beaten the box office take of both 2 Fast 2 Furious and The Fast And The Furious: Tokyo Drift. It’s less then one million bucks away from overtaking The Fast And The Furious, which it will likely surpass by the time the East Coast starts eating lunch today.

Furious 7 made a lot of money.

There were, of course, other movies that opened this weekend, and good luck to them. The Helen Mirren-starring historical drama Woman In Gold opened in just 258 theaters and still managed to earn over $2 million, giving it a very respectable seventh place at the box office. Mirren’s still got it.

At least we’ve still got It Follows to pump up the indie pack, as the horror darling added 437 new theaters to its sex ghost ranks, making almost $2.5 million in the process. It also hung on to its top 10 spot—well, relatively—slipping down into sixth place after its fifth place showing from the previous week (damn you, Furious 7!).

The rest of the top 10 was similarly (mostly) unchanged, with nearly every film moving down a single spot under the weight of the Furious juggernaut, including Home (second place with $27.4 million), Get Hard (third place with $12.9 million), and a little switcheroo between Cinderella (which stayed in place in fourth, sweeping up over $10 million in the process) and The Divergent Series: Insurgent (which dropped to fifth place after last week’s third place, making a cool $10 million in the process, enough to finally push it over the $100 million mark).

Still, there’s one story from this weekend worth remembering: Furious 7 made a lot of money.