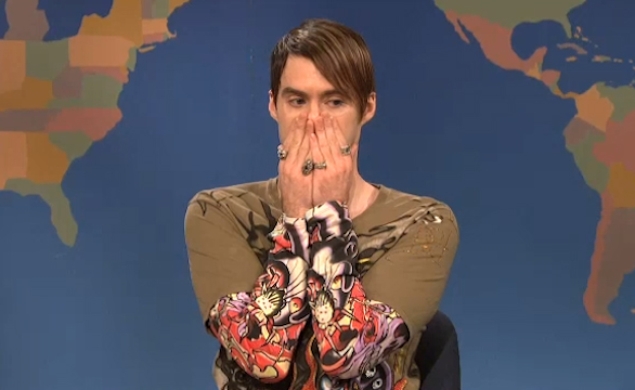 Steven Spielberg makes a lot of movies. That is one of the perks of being probably the most commercially successful filmmaker of all time: Everybody wants to get into bed with you, and if that works out, possibly work with you as well. We recently announced that Spielberg would be directing the long-in-the-works adaptation of Ernest Cline’s retro-futuristic novel Ready Player One, about a dystopian future where people find escape in the pop-culture detritus of the past.

But that is not the only film on Spielberg’s plate. He is also scheduled to direct an adaptation of Roald Dahl’s BFG (Big Friendly Giant) with Tony-winner Mark Rylance as the affable gent with the redundant name (wait, he’s big and he’s a giant??) based on Dahl’s 1982 kids’ novel. Dahl, who infamously once said, “There’s a trait in the Jewish character that does provoke animosity ... I mean there is always a reason why anti-anything crops up anywhere; even a stinker like Hitler didn't just pick on them for no reason.” So you can only imagine how much nachas Dahl might derive knowing that the most famous Jewish filmmaker of all time will be directing an adaptation of one of his books, just as it must have filled his heart with joy knowing that the Jewish Gene Wilder played Willie Wonka, his most famous creation.

1982, incidentally, was the last time Spielberg collaborated with Melissa Mathison, who will forever go down in history for writing E.T. and putting up with Harrison Ford’s legendary grumpiness during the time they were married. Today, Deadline announced that Saturday Night Live alum Bill Hader will be joining the cast as one of the giants. The film chronicles the Big Friendly Giant, The Queen of England, and a little girl’s attempts to keep ugly, mean giants from causing all manner of damage.

Hader was fantastic in The Skeleton Twins, and his film credits include such hits as Forgetting Sarah Marshall, Pineapple Express, and Knocked Up. He’s a terrific performer and working with Spielberg can only be a good thing, as the casts of 1941, Always, and The Terminal can all certainly attest.