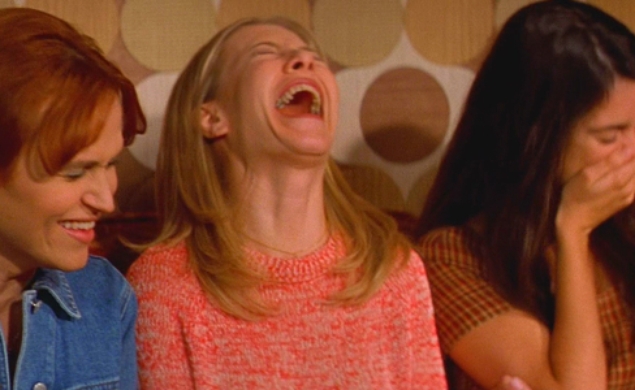 All About My Mother (1999)
Directed by Pedro Almodóvar
Free for Hulu Plus subscribers
In All About My Mother, Pedro Almodóvar turns down the heat on his typically boiling melodrama and sets it to simmer. The effect is wonderful (and Oscar-winning)—there’s still plenty of camp and circumstance, but it’s (slightly) more subdued, and subsequently the story hits a little harder, feels a little realer. The film follows Manuela (the fabulous Cecila Roth), a transplant nurse and single mother who loses her only son when he’s hit by a car on his birthday. Reeling, Manuela quits her job and moves to Barcelona to find and inform her son’s father, whom she hasn’t seen in 17 years and who’s now living as a woman named Lola. But finding Lola is, ultimately, not the point of the film—it’s really about Manuela’s healing, about how she moves on with her life with help from a sprawling solar system of women, including a transgender prostitute (Antonia San Juan), a sweet and troubled nun (Penelope Cruz), and the actress her son once loved (Marisa Paredes). And it’s about the roles, both literally and figuratively, that women play over the course of their lives, in part so that, as Manuela puts it, they can “avoid being alone.”

I Will Follow (2010)
Directed by Ava DuVernay
Free for Netflix subscribers on Netflix streaming
In the Rogert Ebert doc Life Itself, Selma director Ava DuVernay recounts a story about how, as a kid, she met and took a photo with Ebert on a trip to the Shrine Auditorium. Years later, he positively reviewed her first film, I Will Follow, and she wrote a letter to him, explaining their connection, how much his approval meant to her, and how seeing the review and the photo brought up bittersweet memories of her aunt, who’d since passed away. (Ebert also tells that story here.) I Will Follow is as personal as DuVernay’s letter, taking place over the course of one day in a woman’s life—a woman who’s just lost her beloved aunt. It’s a small film, short and simple, and almost feels more like a play than a movie. But it’s better for that simplicity, spare and lived-in. I Will Follow is about grief and growth, about how even the most fleeting of interactions with other human beings can be meaningful and significant. In almost every way, it’s vastly different from Selma, and in that way it demonstrates DuVernay’s impressive range—writ large or small, her work makes an emotional impact.

The Seventh Seal (1957)
Directed by Ingmar Bergman
Free for Fandor subscribers
Throughout his illustrious career, Ingmar Bergman made no secret of the fact that he was conflicted about God. In The Seventh Seal, the director grapples with the concept of “silence in heaven,” tormented by the idea that man is alone in the universe, that life (and death) are ultimately meaningless. His later movies—particularly Through A Glass Darkly, Winter Light, and The Silence—deal with the same theme, but in a subtler, stranger (and, in my humble opinion, more engaging) fashion. In the allegorical Seventh Seal, Bergman looks at God and death through the lens of the Middle Ages, just after the Crusades and in the midst of the Black Death. The film’s primary characters (a knight and his squire; a family of three) stand in for him, alternately wondering aloud about and exalting the existence of God as they travel through Swedish towns, taking in the literal and existential damage the Plague has wrought on its people. Bergman only improved with age, but this movie is regarded as a classic and a masterpiece for a reason, and it’s required viewing for those who want to understand the full arc of his growth—and the full arc of cinema as an art form.

Locke (2013)
Directed by Steven Knight
Free for Amazon Prime subscribers, $3.99 to rent
Tom Hardy, whom we’ve previously established is very scary, hits a newer, less terrifying (but no less intense) note in Locke. Steven Knight’s film follows Hardy as Ivan Locke, a rich construction manager who’s having, as our reviewer David Ehrlich put it, “the worst night of his life,” headed to the birth of a child born from his infidelity. The movie’s conceit is what sets it apart: Knight plants Locke firmly in the driver’s seat of his BMW for the entire 85 minutes, which keeps things taut, suspenseful, and stressful as hell. As Erlich puts it in his four-star review, “it’s a broad, contained work of suspense that takes advantage of the car as a unique hybrid between public and private space.” In other words, watch this while you’re driving!