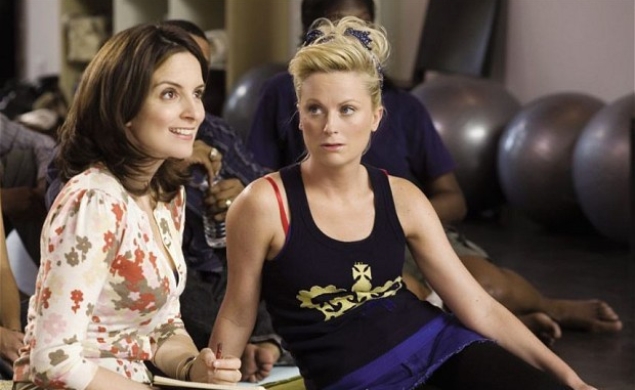 Historically, the movie industry hasn’t done the best job of including or representing women. Female Stuff is a regular feature that examines how it’s improving. Or not.

Sign of hope: Amy Poehler and Tina Fey’s monologue at the Golden Globes
On Sunday’s show, Poehler and Fey sharply, hilariously called out the industry’s biases against women. Just what us feminists like to see: Two brilliant women taking unfair advantage of a worldwide broadcast to spread their harmful and destructive message of gender equality! They mocked Newsie winner Russell Crowe’s statement about available parts for women over 40. They called out the Hollywood Foreign Press and George Clooney, who is pretty great, but also deserves to be made fun of at least once hourly, lest he spend too much time (more than one hour) reveling in himself. (And, er, they also committed fully to what I thought was a pretty racist Kim Jong-un segment, but that’s an entire thinkpiece in and of itself.)

But arguably the best bit was the one lampooning Bill Cosby, who’s recently been accused of drugging and raping at least 24 women. In my opinion, the Cosby bit was a much-needed dose of reality for an industry that’s, for the most part, shoved the Cosby accusations under the rug. Not all feminists agreed with me, even though we are a secret society that meets nightly in an underground bunker to agree about everything, then burn our bras and craft elaborate plots to murder George Clooney. But Spencer Kornhaber of The Atlantic applauded the bit: “This was a rape joke with a point—a statement of support for accusers who have been maligned and had their motives questioned.” So did writer and transgender activist Janet Mock, who tweeted, “No, rape isn’t funny, but Tina & Amy pointing out this horridness on the network where Cosby reigned is powerful.”

It’s significant to note that Fey and Poehler must’ve known they’d be criticized by some for “making light of the situation,” and by others for taking Cosby down “without any hard proof.” The fact that they did it anyway is a feminist statement in and of itself. It was courageous and risky, and undoubtedly a message to the women claiming Cosby raped them: We believe you. Don’t be intimidated or criticized into silence. And we’ll see you tonight at the secret meeting.

Harbinger of doom: The number of women working in the industry is declining
A new study by the Center For The Study Of Women In Television And Film at San Diego State University says that, over the past 17 years, the number of women directing the top 250 grossing films has declined by 2 percent. In other words (or numbers, as it were), women represent only 7 percent of the directors on the big moneymakers. In fact, the percentages of women working as writers, editors, and producers have all dropped.

Even more depressing: It’s not for lack of trying. One third to more than half of students at major film schools are women. There are lots of micro-causes for this: a lack of mentorship opportunities? The fact that women are often criticized more roundly for making mistakes and socialized to color within the lines? But the bigger, obvious problem is the industry’s inherent sexism. The numbers don't lie. Whatever’s at the root, as Dr. Martha Lauzen, the center’s executive director and the study’s author suggests, the men who make most of these decisions need to accept some responsibility and help remedy the issue. “It’s seen as being a woman’s problem, but I don’t think that’s the case,” she says. “Why not ask the guys in charge, because they’re just as responsible, and it’s going to take everyone working together to fix it.” Guys, do you want to come to the secret meetings too?

Sign of hope: Charlize Theron demands equal pay for The Huntsman—and gets it
One of the bleaker facts revealed in the Sony hack: How much less cash Jennifer Lawrence and Amy Adams were pulling in than their male co-stars (7 percent of American Hustle’s profits versus 9). Apparently, Charlize Theron agreed. Page Six reports this week that Theron demanded she make the same amount as co-star Chris Hemsworth ($10 million) for their upcoming film The Huntsman. She got it, and the media lauded it as a victory, which is also a positive sign. (If there were any “bossy” or “bitchy” remarks, I certainly missed them.)

Harbinger of doom: The Oscar nominations
To be fair, the Oscars screwed up a fair bit this year (see: our Oscars post). But the biggest and most disturbing trend was the organization’s whitewashing and men-washing (I’ve just made up this term, and it will stay). Not a single person of color nominated in the main categories. (Related: check out the stream of Tweets under the #OscarsSoWhite hashtag.) No love for Mica Levi’s “weird, woolly, wonderful” (thank you, Genevieve Koski) score for Under The Skin, or for Gillian Flynn’s exceptional Gone Girl screenplay. Almost every major picture nominated fixates on dudes. Not one woman nominated for Best Director. Ava DuVernay became the 10th woman to have her film nominated for Best Picture, but not get a directing nod. (Not the 9th, as has been widely tweeted.) The whitewashing and the men-washing (See? I told you it would stay) are inextricably linked—two kinds of discrimination feeding off each other—especially when looking at them through the lens of intersectionality, or the idea that race, gender, and class discrimination are all related. Essentially, when one group of us goes underrepresented or ignored, we’ve all failed.

Sign of hope: Girlhood
Boyhood, while wonderful, was a highly specific story about an all-white family—and primarily its youngest son—directed by one of the many white men who are able to find consistent work and acclaim in Hollywood. This isn’t innately problematic, but as we’ve established, women are underrepresented in the industry, and it’s not difficult to imagine how most financiers would’ve responded to a female director trying to find support for a 12-year passion project. (Not very well, if you’re trying to imagine right now.) The forthcoming Girlhood, which released a new trailer this week, is a step in the right direction, and not just because of its titular symmetry. Directed by Celine Sciamma, the movie tells the story of a young black girl, Marieme, who escapes an oppressive family to finally find joy and agency. It’s a small, independent movie, and, whether it’s deserving or not, likely won’t find the same audience as Boyhood, but it’s heartening to see support for directors like Sciamma.

Overall, was this a positive, negative, or neutral week for women in movies, Rachel?
Well, Rachel, I’m gonna have to go with negative. I know, I listed more good signs than bad here, but the bad signs were pretty damn bad, weighing heavily in the balance. The Oscars, which are (somewhat sadly) arbiters of taste to millions, are failing to honor significant achievements by women and people of color, and the industry’s employment of women is somehow declining, even though it feels like something we’re talking about now more than ever. It’s 2015, people! Let’s get our shit together.

Further takes on the feminism front from around the web: