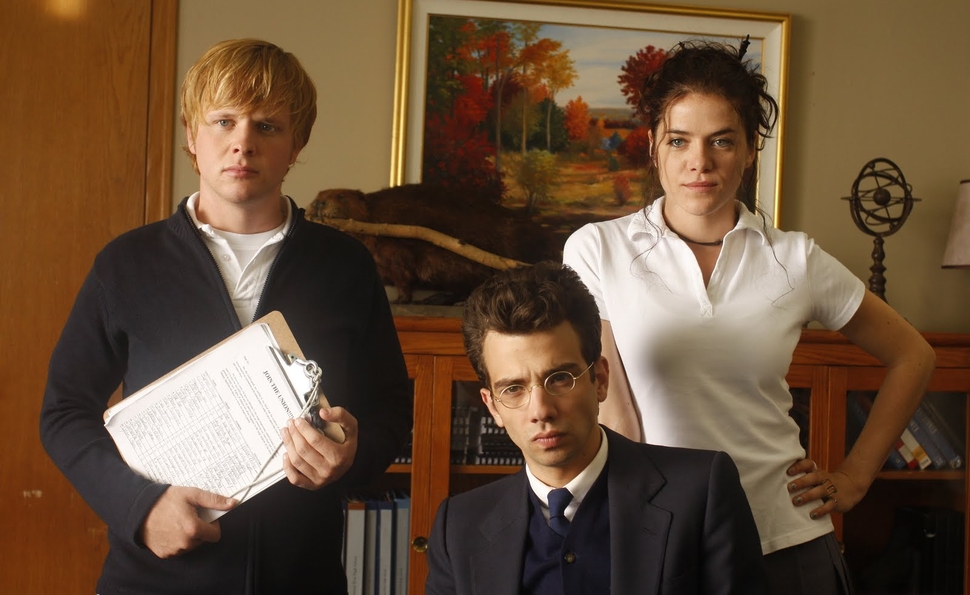 Thanks to the vagaries of Netflix’s recommendation algorithm, it doesn’t take more than a few steps to go from family-friendly kiddie pabulum like The Smurfs 2 to a left-field oddity like The Trotsky, a 2009 Canadian comedy that re-imagines Rushmore as a tongue-in-cheek Marxist crowd-pleaser. The journey from The Smurfs 2 to the semi-obscure Jay Baruchel vehicle begins with Superbad’s Christopher Mintz-Plasse, whom Netflix lists as a Smurfs 2 cast member. (Mintz-Plasse was billed as part of Smurfs 2 back when trailers for the film first started to appear, but we checked with Sony Pictures Animation, and got confirmation that he isn’t involved with the film in any way.) Superbad also features Bill Hader, who in turn appears in Knocked Up, which also features Baruchel.

But perhaps Netflix is onto a bigger game than merely connecting the casting dots. By linking them to The Trotsky, however loosely—or, as the case may be, inaccurately—maybe it was trying to unearth the utopian Marxist core at the Smurfs’ heart. The Smurfs 2 is a capitalist enterprise, but it lovingly depicts an egalitarian society where everyone is equal under benevolent overlord Papa Smurf, the Papa Joe Stalin of the Peyo universe. It’s the Soviet dream realized on a tiny blue storybook level.

As recently as the 1980s, Communism loomed ominously as the greatest threat to humanity since the fascists of World War II. It was a sinister ideology intent on either conquering the world or destroying it with nuclear weapons in a frenzy of mutually assured destruction. Growing up, I thought opposing the Soviet Union was like battling Mike Tyson, a ferocious, fierce, almost unbeatable foe. It turns out it was more like fighting two small children stacked atop each other inside a Mike Tyson costume. In the ensuing years, Communism has devolved from the pre-eminent threat to mankind into a kitschy historical reference The Trotsky exploits to maximum comic effect.

Baruchel stars in The Trotsky as Leon Bronstein, a passionate Canadian high-school student who labors under the delusion that he’s the reincarnation of assassinated Marxist revolutionary Leon Trotsky, and that he’s destined to retrace Trotsky’s path through life, right down to getting assassinated in a warm climate. That’s a frightening level of conviction; even if I were convinced I was the reincarnation of Abraham Lincoln, I would want to skip going to Ford’s Theater to catch Our American Cousin. But not Leon: He longs to experience everything his spiritual father did, even if it ends with him being murdered by emissaries of the same revolution he helped foment as a passionate young man.

The Trotsky opens with the kind of stirring Soviet anthem that extols the golden future promised to the suffering proletariat once they throw off the yokes of their capitalist oppressors. Meanwhile, a roving camera pans over copies of Trotsky’s books and newspaper clippings relating to his death. It eventually finds nine note cards collectively outlining the protagonist’s “Manifest Destiny,” at least in his own feverish imagination.

They are, in order:

This opening re-creates Wes Anderson’s characterization-through-interior-design approach, the conviction that people define themselves both by what they put on their walls, and by their awesomely retro wallpaper. Here, the cards establish Leon as an oddball dreamer à la Rushmore’s Max Fischer, only his dream production is an international Marxist revolution rather than an incongruously kid-filled version of Platoon. Leon approaches the difficult business of sparking a global anti-capitalist insurrection with the dogged determination his peers devote to getting into the right college or impressing cute girls. 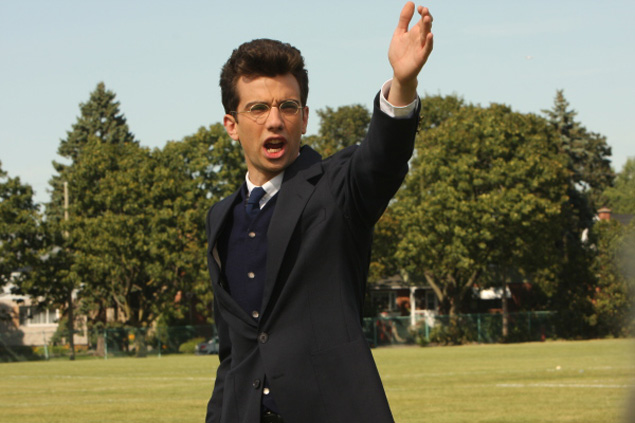 The Trotsky’s opening derives its humor from the world-beating nature of its protagonist’s goals and his adorably adolescent way of conceiving them, in the notion that re-creating the exact life path of a world-famous revolutionary and leftist icon could begin with making a thorough “to-do” list that ends with the listmaker’s violent death. Leon is like an overgrown Boy Scout looking to get his merit badge in Marxist revolution. He expresses his desires with boyish enthusiasm, excess pep, and liberal usage of ellipses and exclamation points. He’s so excited about the looming socialist utopia that he’s devoting three exclamation points to it.

This boyishness is conveyed in part through the exuberant, unselfconscious language Leon uses to describe his future, but also in the handwriting itself. The film shares with Anderson’s films an obsessive attention to detail that sometimes veers into fetishizing production design, including an obsession with typefaces and handwriting. Anderson’s film titles even sound like fonts: Bottle Rocket, Rushmore, Darjeeling Limited, Moonrise Kingdom. So does The Trotsky: Think something bold, blocky, and redolent of the soul-crushing design of Eastern Bloc.

To its credit and detriment, The Trotsky thinks its protagonist’s furious Marxist convictions are adorable. They may be at the core of Leon’s being, but The Trotsky treats them like a precious adolescent affectation, like Harold’s predilection for archly stylized suicide attempts in Harold & Maude. The Trotsky does not openly mock its protagonist’s ideals so much as treat them with supreme condescension, as a misplaced vehicle for admirable idealism. Leon’s unshakeable belief that he is the reincarnation of Trotsky leads him to stir up labor unrest and fight corrupt authority wherever he encounters it—which, since he’s a teenager, is pretty much everywhere. When his factory-owner father tries to interest him in working in the family business, Leon predictably rebels, and his father exiles him to the vast wasteland of the Canadian public-school system.

The principal at Leon’s new school, a dead ringer for Vladimir Lenin, warns that he runs a tight ship, to which Leon enthuses, “I respond passionately to structure.” Before long, however, they’re butting heads as Leon tries to rile up a student body the principal (wryly played by Colm Feore) believes are genuinely apathetic and consequently indifferent to attempts at reform, rather than merely bored and consequently open to a call to arms. Leon, meanwhile, begins aggressively courting Alexandra (Emily Hampshire), the much-older grad-school daughter of a famed progressive lawyer (Michael Murphy). His interest seems to be driven as much by a stubborn belief that it’s part of his destiny as the reincarnation of Leon Trotsky as it is a genuine attraction to the smart, attractive Alexandra, who is understandably skeptical of, but also intrigued by, her curious new suitor.

Back at public school, Leon attempts to transform a couple of pot-smoking slackers from the student union into a proper union agitating for social change. When the baffled representatives try to explain to Leon that the student union mainly just thinks up a theme for the school dance, Leon seizes upon “social justice” as a theme, leading to an amusing setpiece where students dress up as figures from Animal Farm and a woman dressed as Ayn Rand is turned away, for understandable reasons.

Alexandra and the slackers in the student union both respond to Leon’s passion, his belief that he’s the living embodiment of Leon Trotsky reborn, and his conviction that the tenets of Trotskyism are inherently right. Leon is a true believer in a world ruled by boredom and apathy. In a realm of inertia, where everyone seems primarily concerned with just getting by, Leon’s conviction serves as a powerful catalyst, if not for lasting and profound social change, then at least for action of some sort. Leon may be insane, but he makes everyone’s life more interesting. 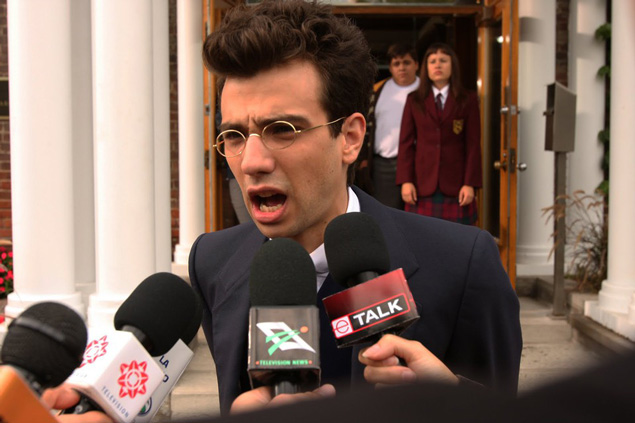 The Trotsky makes its hero palatable to an audience liable to view Soviet-style Marxism as a joke by positing his rebellion in universal terms—he’s an iconoclast shaking up the system!—rather than explicitly rooting it in a specific, controversial political philosophy. In a key line, one of Leon’s radicalized fellow student-union members tells a group protesting the school, “I’ll figure out what I believe later. Right now, all I want is for that asshole [the principal] to be wrong, and that’s the only reason I need to follow Leon.” This speaks to The Trotsky’s fundamentally apolitical nature: It ultimately doesn’t matter what Leon believes, only that he believes it so passionately that he infects others with his idealism and intensity. Even Alexandra, who really should know better, is beguiled by Leon’s single-minded devotion to living out his destiny. He’s also kind of cute, which doesn’t hurt.

The Trotsky has an enormous asset in the tall, wiry, intense Baruchel, who looks the part of a perpetually apoplectic would-be teenaged Bolshevik revolutionary. His offbeat charm renders Leon’s furious convictions not only palatable, but oddly appealing. With another actor in the lead role, The Trotsky could easily be an insufferable quirk-fest, but Baruchel sells the role through dogged charisma, just as his character breaks down everyone’s defenses through sheer persistence. And though it could easily lose 20 minutes from its 120-minute runtime, The Trotsky is a pleasant surprise, a breezy trifle that empathizes with its outcasts instead of judging them, or scoring cheap points off their naïveté. It helps that the film has a lead who can utter a line like, “The tunic of oppression will choke you, sir!” with absolute conviction.

Will audiences for Smurfs 2 also like The Trotsky? The films are somewhat different endeavors, even if, on an underlying level, they share the same beautiful dream of a society that provides equally for all its citizens, be they confused young Canadians on an epic quest, or tiny blue fantastical creatures of the forest. Then again, The Trotsky is often guilty of using revolutionary politics as faux-edgy window dressing for a populist comedy about sticking it to the man. (Baruchel plays the most huggable kind of revolutionary.) But while The Trotsky’s soft, squishy heart keeps it from being as subversive or edgy as it might have been, it also gives it a soul and a sweetness that lets it transcend both its twee premise and its massive debt to Wes Anderson. Its heart is always in the right place, even though its politics are alternately confused and toothless.