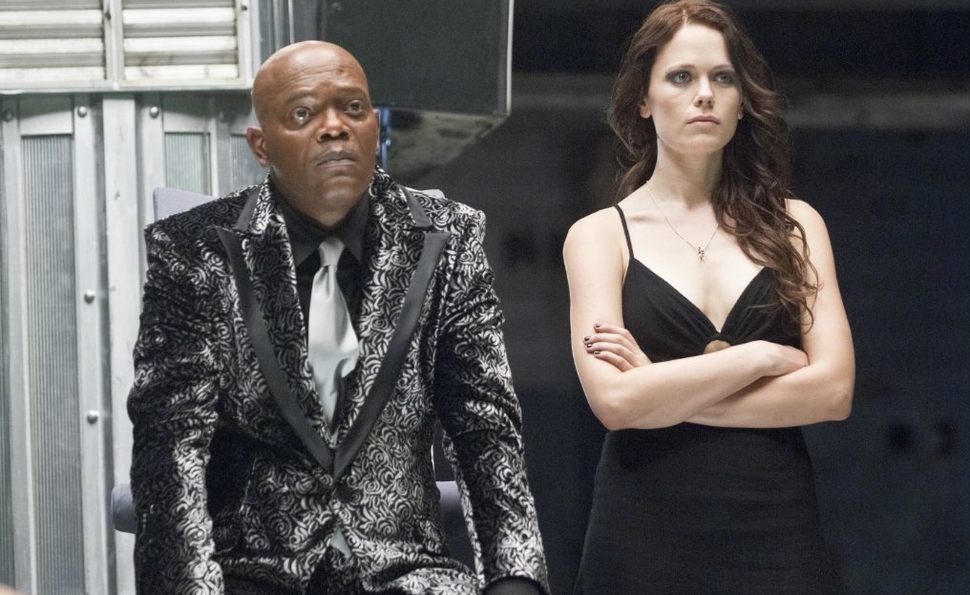 The Path: Sin City: A Dame To Kill For—>Arena

We begin this entry with Sin City: A Dame To Kill For, the long-in-the-works follow-up to Sin City, a movie that changed the visual language of action filmmaking and marked the last time anyone mustered enthusiasm for anything involving co-directors Robert Rodriguez and Frank Miller. This leads Netflix to recommend the 2011 direct-to-video bloodbath Arena, directed by special-effects veteran Jonah Loop. Arena belongs to a curious subgenre of action movies that can be traced back to The Running Man, and before that, the Richard Connell short story “The Most Dangerous Game.” These movies comment on mankind’s regrettable fascination with bloodshed and violence by depicting a game where the ultimate goal is the murder of human beings. (In the Running Man-derived strain of this subgenre, the murder of human beings generally takes the form of entertainment, either of the televised or webcast variety.)

These films suffer from an innate hypocrisy in that they attempt to critique a widespread obsession with violence by feeding that same impulse. In Arena, the vessel for this strange brew is The Death Games, a popular online webcast/gambling operation/criminal enterprise in which fighters with bro-tastic nicknames like “Death Dealer” and “Ripper” battle to the death for the deranged enjoyment of a massive international audience. The film shows a series of global landmarks to cheaply, easily convey the the dizzying scope of the show’s popularity. Then the filmmakers decide it would be even cheaper and easier to convey the show’s astounding international popularity solely via cut-aways to Asian fans in an office building, and some bros and sorority girls at the Phi Epsilon frat house totally geeking out to the online bloodshed.

“It makes me giddy in my underpants,” crows a particularly excited Phi Epsilon bro, reacting to the manly grappling between The Death Games’ sweaty, scantily clad brawlers. Yet debate exists as to the authenticity of the games: One of the Phi Epsilon bros insists it can’t be real, because if it were fake, something so unbelievably entertaining as seeing musclebound lunks cosplay old Mortal Kombat matches—Arena is so derivative of Mortal Kombat, it actually steals its “Finish him!” catchphrase—would definitely be on TV. Another, less skeptical bro insists, “My brother-in-law’s friend works for the FBI. Says they’re looking for the guy who runs this thing.”

Just who runs this thing? That would be Logan, a cackling heavy played by Samuel L. Jackson at his most dementedly over-the-top. Back in the day, Logan’s dad ran bare-knuckle brawls in his back yard, and Logan decided to take that business model online and stage fights to the death for the benefit of a massive unseen audience including, but presumably not limited to, the bros of Phi Epsilon and those Asian office-workers. Logan’s fighters have a habit of dying on him, an unfortunate side effect of staging matches with a 100-percent chance of at least one party dying. So he must constantly recruit new fighters through a process of kidnapping and seduction.

Take David Lord (Kellan Lutz), a quivering mass of muscles first introduced in a state of domestic bliss, which in action movies like this inevitably signals that a violent fall from grace lurks just around the corner. David couldn’t be more excited about becoming a father when, boom, out of nowhere a black vehicle smashes into their car, killing David’s wife and his unborn child instantly, and leaving him gripped by suicidal despair. He has nothing left to live for other than scowling and drinking, until one night in Mexico he encounters a mysterious woman named Milla (Katia Winter) who invites herself back to the scuzzy rat-hole where he’s living and coos words destined to melt his cold, grief-besieged heart: “I hope you have a nicer place than this shithole to fuck your wife.”

When David retorts that his wife is dead, Milla glumly removes her top and dispiritingly reveals her breasts, like Samantha Mathis in Pump Up The Volume. Before these lovely human beings can make love, however, David is zapped with a stun gun and wakes up in a dank cell, where a masked lunatic informs him, “Your name is Death Dealer.” He continues, “Do what you were born to do, Death Dealer, and your demise will be one of glory! Resist and I promise you pain and a life you could never conceive as being imaginable.”

Still, David resists to the point where his primary tormenter, Kaden (Johnny Messner), thinks they’ve made a mistake in recruiting what Kaden thinks is a doctor. “He’s a fucking doctor! He’s the last person we should grab as a competitive kendo artist!” Kaden insists, despite being repeatedly told that David is a firefighter and a paramedic, but not a doctor. Despite this confusion, David desperately tries to revive the people he first murders to death with his fists of rage. Just as the folks behind The Death Games are playing a preposterous double game, trying to reach unprecedented heights of fame and financial success while keeping their illegal death site a closely guarded secret, David devotes most of his energy to trying to kill his foes (because he has no choice), but also some of it to trying to bring them back to life. Logan and Milla ply David with whores in industrial quantities, and as his body count skyrockets, he begins to lose touch with his humanity. He becomes a brute, a two-fisted killing machine who demands his freedom should he kill 10 opponents, the last one being Kaden, whom he really does not care for.

There is, of course, only one reason to watch Arena: the opportunity to see Samuel L. Jackson go crazy in a shameless star turn, something he only does three or four times a year, in a variety of mostly terrible movies. There’s something unseemly about watching Jackson in a movie like this, because he’s so obviously having way more fun than even the most indulgent audience member. Cackling with maniacal glee as he presides over his illicit empire like a debauched cross between The Wizard Of Oz and Vince McMahon, Jackson greedily monopolizes whatever fun there is to be had in Arena.

As Logan, Jackson orders around a pair of sexy assistants who are equal parts technological geniuses and prostitutes. He eats decadent meals worthy of a Roman Emperor. And in perhaps the single most enjoyably preposterous moment in a movie full of them, he cackles as David is paraded before him in a Hannibal Lecter-style mask and restraints, “What we have here is a failure to communicate! I have always wanted to say that! I love Strother Martin!” (At this point, Arena is less an actual movie than a crazy costume party.) Jackson’s dialogue feels ad-libbed; he’s playing a much bigger, much crazier game than everyone else, and he delights in uttering bad-guy clichés like, “We’re the same! You’re just like me!”

Jackson is clearly enjoying the free rein to be as over-the-top as his hammy heart desires. It’s not as if the schlockmeisters behind a low-budget fight-to-the-death B-movie like Arena are going to start challenging his choices. I suspect that if he were to come on set and insist his character’s catchphrase should be, “I’m a stinky baby who likes to smell his own farty diapers,” the director would probably just throw up his hands and concede, “That doesn’t really fit our vision, but if that’s part of your conception of the character, then go with it.”

The central plot of Arena is so staggeringly stupid and dull that all I could think about were the mechanics behind The Death Games. How did they start? What does Logan’s business model look like? Why does what appears to be a massive international organization have only four or five employees? Are Logan and Kaden Facebook friends? Do they attend each other’s birthday parties? Does Logan sometimes regret the kill-crazy nature of his life’s work? We don’t learn the answers to those questions, but we do get a big climatic twist where we learn that David isn’t David, or Death Dealer after all, but rather an undercover operative sent to infiltrate the games so he can lead authorities to Logan. David succeeds in shutting down the games (after killing 10 people with his bare hands in the process), but Logan escapes.

I hope this is to set up a sequel that will ignore Death Dealing and no-holds-barred gladiatorial combat and focus on Logan’s attempts to rebuild his empire. The first step: commissioning an outside report on how The Death Games went awry and how he can keep himself from making the same kinds of mistakes with Death Games 2.0. Only by making this theoretical sequel an exploration of how an eccentric businessman learned from his mistakes, rather than a bloody, Darwinian action movie, can the Arena franchise redeem itself. Because some things are more important than life or death—like implementing practical and sustainable business strategies and seeing them through to the bitter end.