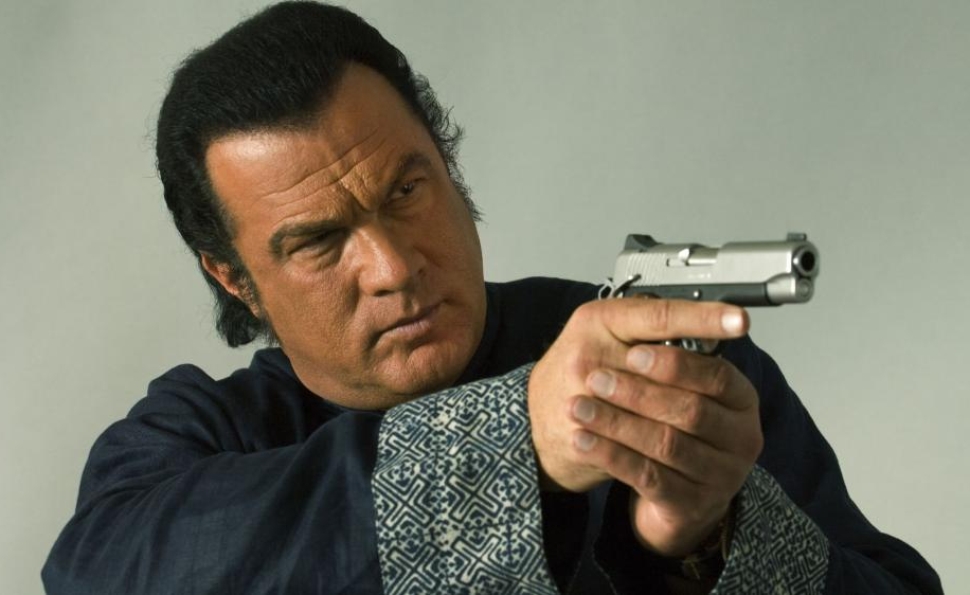 In Urban Justice, Steven Seagal is out for vaguely racist vengeance

The path: X-Men: Days Of Future Past -> The Enforcer -> The Mack -> Urban Justice

We begin this entry with X-Men: Days Of Future Past. This leads the Netflix recommendation engine to suggest the Dirty Harry movie The Enforcer, and then the classic Oakland blaxploitation thriller The Mack. In the greatest leap in logic this column has ever witnessed, poor, sweet Netflix imagines that people who like The Mack will also like the 2007 Steven Seagal/Eddie Griffin vehicle Urban Justice (a.k.a. Renegade Justice in England, where “urban” probably is not lazy shorthand for “black”). The stretch isn’t just that people who like The Mack will enjoy a late-period Seagal vehicle, it’s that anybody would enjoy a late-period Steven Seagal movie.

I grew up on Steven Seagal. He appealed to me in the pre-critical stage of my intellectual development, when I could still be disproportionately impressed by the coolness of a whispering ponytail enthusiast with a questionable backstory. When I was 12, Steven Seagal seemed like the coolest guy in the world. I anticipated early vehicles like Marked For Death and Hard To Kill the way I look forward to the latest Spike Jonze or Wes Anderson movie today. Then I grew up, and Seagal regressed. And regressed. And regressed, until he stopped being a bankable action hero, and became a walking punchline. These days, my primary exposure to “Seagal” comes from the wonderful podcast Sklarbro Country, where Dan Van Kirk plays Seagal as a deluded narcissist still trying to play the big shot, while just barely eking out a hobo-like existence on the fringes.

Seagal is still big, in the sense of being massively overweight and having a head the size of a hot-air balloon. It was the movies that got small. There seems to be an inverse relationship between the size of Seagal’s belly and the scope of his films. He now resembles a sentient Christmas ham wearing people clothes, rather than the hunk whose “sleek good looks, celebrity manner and easy humor” Janet Maslin praised in her review of 1991’s Out For Justice. In Urban Justice, he wears a leather jacket the exact same shade and consistency as his skin. Once a physical marvel, Seagal now looks like he’s conserving his energy until his next nap. He once had a vocal rasp of Clint Eastwood-like toughness and authority. Now he sounds like he’s saving every breath, knowing all too well that at his age, and in his current state of physical disrepair, he doesn’t have many left, and must save as many as possible for important things, like devouring eclairs. 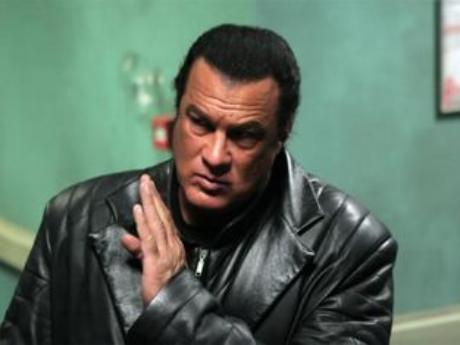 I would feel bad mocking the man’s appearance, except that Seagal is, by nearly all accounts, a singularly dreadful human being, even for an actor, celebrity, and action hero. Given his long parade of public jackassery—bigamy, the “Lightning Bolt” energy drink, his 2005 album Songs From The Crystal Cave and 2006 album Mojo Priest, his juvenile bragging about ties to the CIA, the sexual-harassment lawsuit and history of out-of-court settlements, the hilariously narcissistic vanity projects like On Deadly Ground, we’re all entitled to a long, hard, healthy laugh at his expense. That’s just what the wonderfully terrible Urban Justice provides.

At this point, even Seagal’s supposed fans seem to watch his movies primarily to laugh at him, mock his sad descent, and indulge the culture-wide parade of schadenfreude that has been the last decade and a half of the man’s career. Below is the first review of the film I found on Netflix, from someone who had given the film five stars and deemed it “classic Seagal”:

Best Seagal movie in a while. Whether you watch him for real action/martial arts, or whether you watch him for laughs, this movie delivers both. He actually does a decent amount of fighting this film, the most since Exit Wounds. The production value is much better: he does his OWN dubbing lol, he’s actually on the set with the other actors, there aren’t stunt doubles for scenes where he just walks upstairs, etc. On the other hand, he’s older, fatter, has a huge widow's peak and brillo pad hair, tries to be black throughout the whole film, etc. This is classic Seagal, it's hilarious and fun to watch at the same time.

It is a testament to how low standards for Seagal movies have fallen, even among his fans, that he gets high marks for the following:

That might seem like the bare minimum, but Seagal has shimmied under that low, low bar before. I once wrote about the 2009 direct-to-video horror thriller Against The Dark, where Seagal logged no more than five minutes of screen time during the film’s first hour, despite being the top-billed star. So not every Seagal movie passes the stringent Does Seagal Even Star In This? test.

Urban Justice opens with one of those impossibly perfect domestic tableaus that in movies like these, invariably foretell imminent death. Good cop Max Ballister (Cory Hart) has to go to work, but his gorgeous wife makes that tough by throwing herself at him. A man with a life this good clearly won’t make it to the end of the day. Sure enough, he’s quickly killed in a mysterious shooting. Ballister’s mysterious, manatee-shaped father Simon (Seagal) swoops in to investigate, and discovers that everyone in the inner city where Max worked agrees on two things:

Simon nurses his guilt over not being a good-enough father, so to make it up to his son’s memory, he moves into the ghetto and begins killing black people in a righteous quest for vengeance. The ultimate bad guy is a corrupt white cop, but otherwise, every criminal, drug-dealer, gangbanger, or murderer Simon interacts with is black. Apparently nobody at any stage of production saw anything remotely problematic in the concept of an elderly white action star making a movie where he moves to a black neighborhood and starts killing black people.

Driven by a curious combination of grief and blood-lust, Simon moves into a neighborhood where the concept of “lightbulbs” never took off. While some forward-thinking cities went wild for Thomas Edison’s electric brainchild, the residents of Simon’s new neighborhood decided to give the newfangled contraption a few centuries to work out the kinks before implementing it on a widespread basis. Regarding this artificial lighting as a sinister form of voodoo, these urban Luddites choose to live in almost total darkness, purposefully eschewing the contraptions that might allow them to see just how cheap and ugly their homes and neighborhoods are, or just how corpulent and Twinkie-colored their mysterious new neighbor is.

Simon haunts this urban realm of shadows, darkness, and more darkness like a slow-moving, blob-like vengeance-seeking phantom. He sets up shop in a scuzzy apartment whose décor could charitably be described as “crackhouse chic,” and begins asking questions in a barely audible rasp of an unknown origin that invites questions the film doesn’t begin to answer. Is Simon supposed to be from Louisiana, where Seagal has filmed seasons of his reality show, Steven Seagal: Lawman? Or is he supposed to be speaking with an African-American inflection? And how the hell can anyone hear his whispery mumbling? In a more realistic movie, half the dialogue would consist of other characters begging Simon to speak the hell up so they can at least make out what he’s saying.

At no point in Urban Justice does Seagal express any palpable emotion on his sideburned, Botox-frozen giant pumpkin of a head, so he’s reduced to attempting to express intensity through profanity, more specifically through a comical over-reliance on the word “motherfucker.” Seagal utters that word throughout Urban Justice as if he was paid per profanity. “Tell every motherfucker on the street they’re not safe until I find the motherfucker who killed my son!” is a typical line of dialogue here.

Then Eddie Griffin shows up as the film’s primary villain, murderous drug-dealing kingpin Armand Tucker, and he’s all, “Oh, this big white-ass motherfucker thinks he’s gonna out-motherfucker motherfucking Eddie Griffin in Eddie Griffin’s own motherfucking movie? Oh, it’s on now, motherfucker. I’ll motherfuck a motherfucker to death. I don’t even care.” This opens the floodgates of pointless profanity, as these two former titans of the silver screen compete to see who can swear more gratuitously, and with greater zeal. As a professional stand-up comedian, Griffin has a clear advantage, but Seagal really throws himself into the competition.

Griffin once had a thriving film career. Now he’s reduced to amusing himself in a terrible B-movie with stream-of-consciousness rants and ad-libs that are borderline-genius in their half-assed randomness. At one point, Armand grouses, “They don’t make niggas like they used to. Little motherfuckers running around here, crunk dancing and shit.” It should be noted that at no point in Urban Justice do any little motherfuckers run around crunk dancing. Crunk doesn’t even seem to exist in the film’s grim, brutal, harshly lit universe, yet for some reason known only to Griffin—I have a hard time imagining that such an insane, random line appeared in the script—it’s a tragic symptom of society’s decay all the same.

Elsewhere, Griffin riffs on the one way his favorite movie could be improved: He tells a trio of scantily clad, champagne-drinking groupie-types, “The only part they didn’t have in Scarface was him fucking. That would have been some dope-ass shit, you know what I’m saying? ‘Say hello to my little friend!’ You understand me? Like, he could hold a gun to the bitch’s head?” 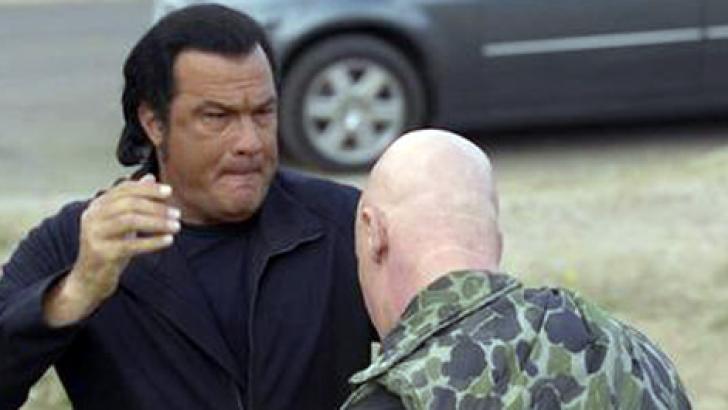 But it isn’t all little motherfuckers crunk dancing and drug kingpins providing tardy constructive criticism to Brian De Palma and Oliver Stone: Simon has a murder to solve. So he meets with a Hispanic crime kingpin played by Danny Trejo, ostensibly for information on his son’s death, but also, presumably, to trade memories of growing up during the Great Depression. Simon just wants to kill the motherfucker who murdered his son, but first, he must finagle his way through a series of slow-motion shootouts in which blurry, indistinct, poorly lit motherfuckers shoot other blurry, indistinct, poorly lit motherfuckers in a variety of interchangeable, confusing sequences. Assuming Urban Justice’s cinematography isn’t a feature-length tribute to the pioneering work of the late Gordon Willis (who famously used The Godfather to test the limits of how darkly a film could be lit), it’s terrible. Director Don E. FauntLeRoy literally has only himself to blame, as he was also the film’s cinematographer. Another director might fire his cinematographer for failing to light any of his scenes, but FauntLeRoy could at least justify it as an artistic choice that helps conceal his star’s formidable girth.

Urban Justice concludes with Simon killing the motherfucker who killed his son, then letting Armand go free, even though Armand killed a whole bunch of motherfuckers for less-than-righteous reasons during the course of the film. The film ends on a perfectly unselfconscious note of deranged, unearned narcissism, with Seagal wobbling away to the nearest Jack In The Box, and Armand gushing, “That’s a cool motherfucker. That’s gangsta.”

Urban Justice is a sublimely ridiculous exercise in unintentional self-parody, a so-bad-it’s-good romp highly recommended to Seagal fans and detractors alike. It has everything short of little motherfuckers crunk dancing and shit, an explicit scene of Tony Montana fucking, and adequate lighting. Will that be enough to attract audiences enamored of the slightly higher-budgeted X-Men: Days Of Future Past? Purely out of nostalgia, I’m going to say it will, because heaven knows Seagal needs all the encouragement he can get at this stage in his tragicomic, but mostly just hilarious late-period career.