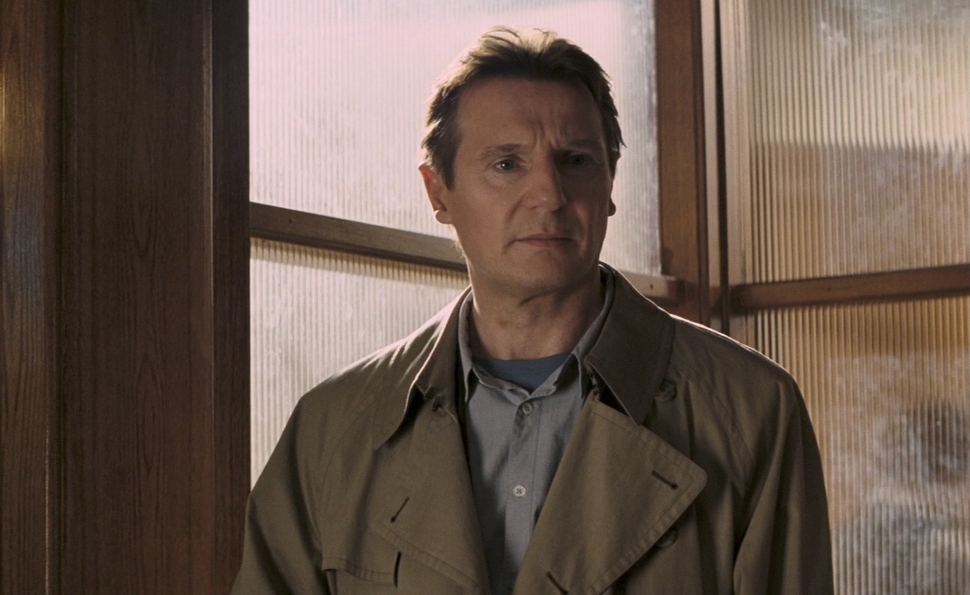 In The Other Man, man of action Liam Neeson stares at computer screens

We begin this entry with Labor Day, Jason Reitman’s adaptation of a Joyce Maynard novel, starring Josh Brolin as an escaped convict and Kate Winslet as the single mother who takes him in. From there, the Netflix recommendation engine, being a rather literal-minded robot, recommends other movies starring Kate Winslet (namely Revolutionary Road) and a 2008 obscurity called The Other Man whose link to Revolutionary Road and Labor Day is a bit unclear. Even more bewildering: Netflix’s contention that anyone would like The Other Man, regardless of whether they liked Revolutionary Road.

I wasn’t familiar with The Other Man before Netflix hipped me to its existence, but I am familiar with its three marquee stars: Laura Linney, Antonio Banderas, and Liam Neeson. Over the past 10 years, Neeson’s reputation has shifted from that of a respected heavyweight actor to that of an action star famous for beating the shit out of bad guys, generally in service of getting back a teenage daughter with an unfortunate predilection for getting kidnapped. Actually, Neeson has been associated with action films of one sort of another for years, both before and after Taken, from 1990’s Darkman to more recent films like Star Wars: The Phantom Menace, Batman Begins, and the Clash Of The Titans remake and its sequels. The Other Man finds Neeson back in action, only this time, he isn’t training Jedi warriors, showing a young Bruce Wayne the ropes, or mixing it up with his fellow Greek deities. Instead, The Other Man finds Neeson staring at a computer screen.

Neeson spends much of the first act of The Other Man glaring anxiously at the computer that belonged to his dead wife, trying to figure out her password so he can open a series of files he knows will fill him with sickening rage. On an abstract, metaphorical level, Neeson’s character, software designer Peter, is stumbling into a web of lies, deceit, and seduction that will upend his comfortable worldview and hurtle him onto a path of vengeance with unforeseen and even deadly consequences. On a less abstract, more practical level, Peter is a man staring at a laptop screen and fiddling around with his keyboard. He’s trying to open a secret folder named “Love,” which contains photos, emails, and other mementos from a passionate, long-standing affair his superstar shoe-designer wife Lisa (Linney) had with a mysterious, suave man known as Rafe (Banderas). Between this film and Cameron Crowe’s Elizabethtown, it seems safe to argue that films prominently involving superstar shoe designers should be approached with caution.

Perhaps because I spend so much of my own life staring at a laptop screen, it’s hard for me to see much romance or drama in the practice. A man passionately reading emails that tear his world asunder simply does not have the dramatic heft of the same man tearing through a book of handwritten letters. Regardless, Peter’s online snooping eventually uncovers the name and location of the mysterious Rafe, a dashing man of mystery who lives in Milan and frequents a café where he plays chess and chats with strangers.

At this café, a determined, obsessive Peter meets Rafe, who doesn’t realize that the towering stranger showing inexplicable fascination with him is actually the widower of his superstar-shoe-designer lover. He also doesn’t realize Lisa is dead. or that he’s entering a metaphorical chess match with her husband, while simultaneously engaged in a literal chess match with him at the cafe. 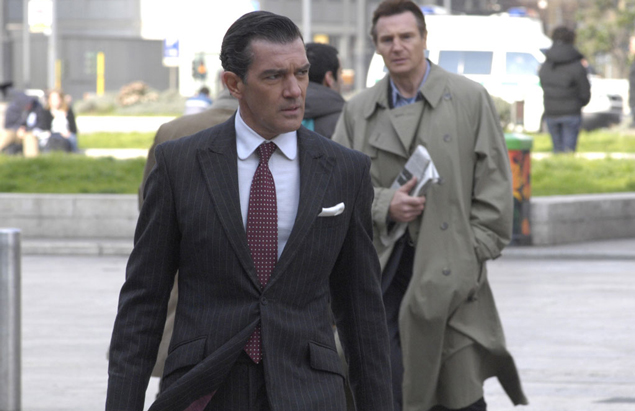 With virtually no prodding, Rafe discourses at length about his love for Lisa, how she was the most beautiful woman he ever met, a woman who, like himself, preferred “hotels and heaven” to the “hell” of marriage. Their extramarital passion was so stirring and inspirational that when Rafe and Lisa started making out at a factory where her shoes were made, they inspired the factory workers to stop what they were doing and break into applause. Rafe, in other words, talks and behaves like a total cheeseball, a kitschy burlesque of a Latin lover played by an actor trapped in a state of winking self-parody.

The film’s first act is dominated by scenes of Neeson staring and entering passwords. In the second, he sits dyspeptically as his nemesis drones on and on about Lisa. And in the thoroughly anticlimactic final act, both sides learn the buried truth about each other, and they come to a place of peace about their relationships with Lisa, and their collateral damage. Rafe learns the curious stranger is his lover’s husband, and Peter learns Rafe isn’t the dashing cosmopolitan playboy he professes to be, but rather a janitor with a penchant for wild exaggeration and self-mythologizing.

Peter finds a note containing the initial clue about his wife’s secret life inside a red stiletto. But even without the telltale scarlet footwear, The Other Man would still feel suspiciously like a big-screen adaptation of The Red Shoes Diaries, with an overqualified Neeson in the David Duchovny role of the grief-stricken man on a shadowy search for erotic secrets. It’d be tempting to call the film a thinking man’s Red Shoe Diaries, but despite the impressive cast and the presence of director Richard Eyre (who had just directed the arthouse hit Notes On A Scandal), there’s nothing remotely smart or cerebral about the film.

The bizarrely pointless The Other Man fails as suspense, but it’s just as inert and pointless dramatically. It’s a half-hearted shrug of a movie so hopelessly vanilla and devoid of action that it all seems to be an elaborate setup for a crazy twist ending that never arrives. Neeson is thoroughly lost, Banderas reduced to recycling familiar shtick, and Linney’s character is fatally underwritten. The Other Man is a mystery not worth uncovering, a film that should end not with credits, but with a sincere apology for wasting everyone’s time and energy. Neeson’s most of all.