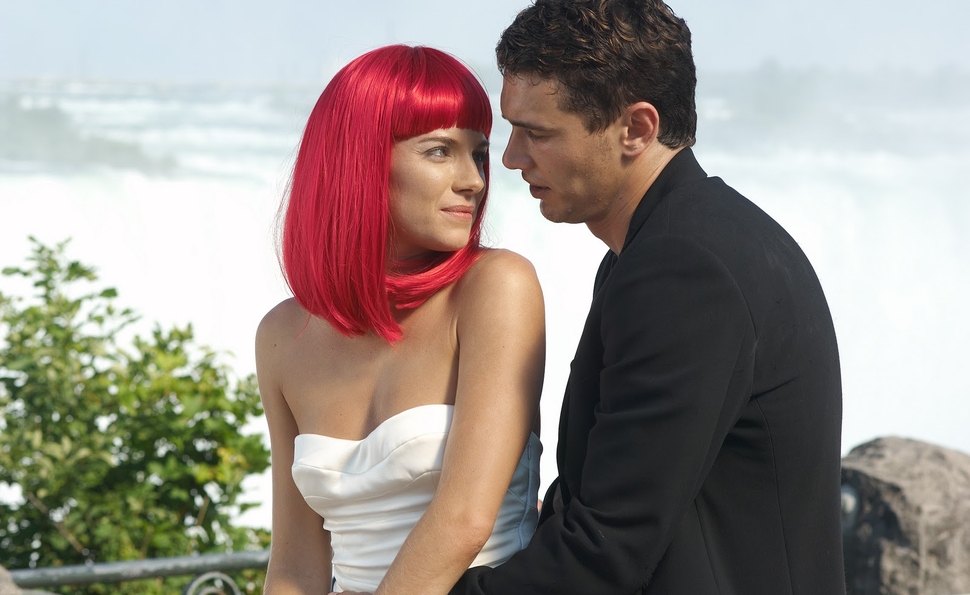 It can be hard to believe, given James Franco’s current ubiquity, but for years, the conventional wisdom was that he was a handsome, charismatic, talented actor whom the industry had underestimated and shamefully denied an opportunity to realize his potential. In this line of thinking, Franco was woefully underserved by a brutal gauntlet of movies that wasted his eccentric genius by casting him in the kind of bland hunk roles better suited to the Shane Wests and Josh Duhamels of the world. Yes, before he was JAMES FRANCO, he was just a struggling actor who put in his time in memorably forgettable movies like Whatever It Takes, Sonny, The Great Raid, Tristan & Isolde, Annapolis, and Flyboys.

During these lean years between his television breakthrough on Freaks & Geeks and his cinematic breakthrough in Pineapple Express, Franco scored intermittent commercial and creative triumphs like the Spider-Man series and Robert Altman’s The Company. But before he dramatically reinvented himself as the personification of artistic pretension, it seemed possible, if not likely, that he might end up the kind of working actor who appears on General Hospital because it’s a paycheck and a gig, not for the sake of writing an essay that contains the following paragraph:

I have been obsessed with performance art for over a decade—ever since the Mexican performance artist Guillermo Gómez-Peña came to visit my class at Cal Arts summer school. I finally took the plunge and experimented with the form myself when I signed on to appear on 20 episodes of General Hospital as the bad-boy artist “Franco, just Franco.” I disrupted the audience’s suspension of disbelief, because no matter how far I got into the character, I was going to be perceived as something that doesn’t belong to the incredibly stylized world of soap operas. Everyone watching would see an actor they recognized, a real person in a made-up world. In performance art, the outcome is uncertain—and this was no exception. My hope was for people to ask themselves if soap operas are really that far from entertainment that is considered critically legitimate. Whether they did was out of my hands.

Yes, there was a time when James Franco (as opposed to bad-boy artist Franco, just Franco) might appear on General Hospital because his agent got him the gig, not because he wanted to use his celebrity to induce cognitive dissonance and challenge conventional notions of reality. For years, years, my colleagues and I issued a persistent plea to the film industry: “Pay attention to Franco! Give him opportunities! Don’t hide his light under the proverbial bushel!” If only we’d known. We might as well have been demanding that Miley Cyrus stop being so repressed and finally express her youthful sexuality a little.

Before James Franco the creatively stunted actor became bad-boy artist Franco, just Franco, his appearance as a meth-dealing bad guy in Homefront, a flag-waving Jason Statham vehicle written by Sylvester Stallone, might have engendered disappointment about the poor quality of his roles. Now, however, we all just assume Franco is playing a meth dealer named Gator in a Jason Statham vehicle to provide fodder for a performance-art piece, or a documentary, or quite possibly a series of poems.

Franco’s admirable, highly mockable explosion of creativity over the past few years could be interpreted as an extreme but understandable overreaction to the everyday humiliations of an acting career. Franco knows what it’s like to be fêted for wearing makeup and ridiculous costumes, and making elaborate make-believe in scenarios that run the gamut from sublime to ridiculous. That has to drive even the sanest, most grounded fellow a little nutty. 2008’s Camille illustrates the kind of casually surreal life experiences Franco had before he snapped and reinvented himself. It’s part of the grand gestalt of craziness and absurdity that made up, and continues to make up, his life as an actor and a celebrity.

Camille, an unclassifiable supernatural comedy-drama-romance that Netflix recommends for fans of Homefront, presents Franco with the kind of acting challenges they presumably don’t train people for in any of the 3,000 or so institutions of higher learning where James Franco is currently studying everything from The History Of James Franco to The Science Of James Franco to Post-Modern Discourses On James Franco As Reflections Of Zizekian Notions Of Celebrity. Early in the film, for example, Franco’s character, a paroled no-goodnik named Silas Parker, has to break some exceedingly difficult news to Camille Foster (Sienna Miller), his lovely bride: She’s dead, and has been since she flew out of the sidecar of his motorcycle early in their honeymoon. 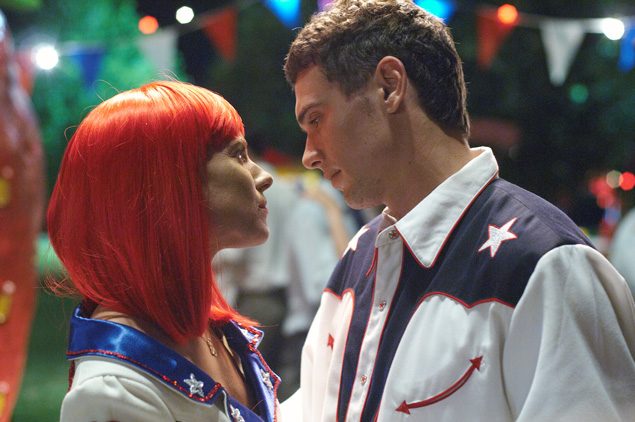 Camille isn’t a zombie, mind you. She doesn’t betray even the faintest hunger for delicious human grey matter, nor does she shuffle about in a telltale fashion. Nor is she a ghost. People can see her. She isn’t intent on haunting anybody. She’s simply a dead person who is slowly decomposing, yet appears to be alive, except for the disgusting rotting smell she emits.

Fantasy and science fiction are generally expected to play by the rules. Imagine how disorienting it would be for the protagonist in a straightforward detective movie to begin flying like a bird. It would completely upend our sense of reality. Even if a film is intent on contorting or changing the rules, it first has to establish what they are. So it’s utterly jarring that Camille kills its title character about half an hour in, then bathes her briefly in a golden light to convey that she’s dead, even though she gets up and continues as if nothing has occurred. Instead of laying the groundwork to explain how exactly a person can keep on keeping on after definitely dying, the film leaves it up to viewers to figure out the rules of its supernatural universe.

By the time Camille kills off its title character, it has done nothing right and everything wrong. This begins with Silas. He’s apparently intended as an irritable but ultimately lovable antihero, but instead, he comes across as a violent, creepy, repellent misogynist: In his first real bit of dialogue, he expresses a seemingly strong, sincere desire to punch his new wife in the face. Romantic comedies thrive on the friction of seemingly antithetical lovers discovering over time that they’re perfect for each other, but it’s hard to root for a romance that initially seems headed straight for domestic abuse and/or homicide, as Silas and Camille’s union appears to be.

For Camille, marriage—even to a paroled career criminal like Silas—represents the glorious realization of her most treasured dreams. For Silas, the stakes are clear: He’s been paroled solely so he can marry Camille, and his parole officer—her uncle—lets him know he’ll be sent back to the hoosegow for good if the marriage doesn’t work out. Silas sees being married to a woman he despises as a sentence slightly less terrible than life in prison, so he reluctantly agrees to marry Camille.

Camille is supposed to be irritating enough to make Silas’ anger toward her understandable, even justified, and to make the prospect of spending decades with a woman who looks like Sienna Miller seem nightmarish. But portraying a character who’s entertainingly irritating is tough. (Think Bill Murray in What About Bob?) An actor who errs even slightly just ends up being annoying, and no one wants to spend 90 minutes being annoyed, with the noteworthy exception of the audience for every Pauly Shore vehicle ever.

Strangely and surprisingly, Miller errs on the side of not being irritating enough. Viewers are supposed to share at least some of Silas’ rage-choked frustration with her, but Camille seems like a sweet, optimistic, big-hearted, overly chatty young woman, making Silas’ early temptation to hit her even more disturbing and misplaced. Sympathy-wise, Camille puts Silas in a deep hole from which he never fully emerges, despite the substantial emotional growth he experiences over the course of the film. And when a character is introduced as a dumbass ex-con expressing a strong desire to pummel the new wife he’s only married to avoid prison, that leaves ample room for spiritual and emotional growth.

The charm, sweetness, and vulnerability Miller brings to the role kills the film’s non-starting attempt at hillbilly comedy. Camille simply isn’t funny—it’s more sad, which is a problem for a comedy. Yet after half an hour or so, Camille essentially stops attempting to be a comedy, and reveals itself as a Lisa Frank-sticker-festooned Trapper Keeper of a movie, a dreamy, supernatural romantic fantasy that prominently involves whimsically painted horses that serve as metaphors for life’s wonder and untamed mystery. (David Carradine co-stars as a mysterious, mystical figure known as “Cowboy Bob” who dazzles Camille with his assortment of show horses painted gaudy colors. One of Carradine’s horses, a beautiful blue one, is dying, yet he can’t bring himself to pull the trigger and conclusively put her out of her misery, in what may or may not be a metaphor for Silas’ doomed union with Camille.) Whether motivated by guilt or a growing fondness for Camille, Silas begins to treat his new dead bride more compassionately. He comes to genuinely feel for Camille, as her hair begins to fall off and her body decomposes, requiring both a funky red wig and the careful application of formaldehyde. 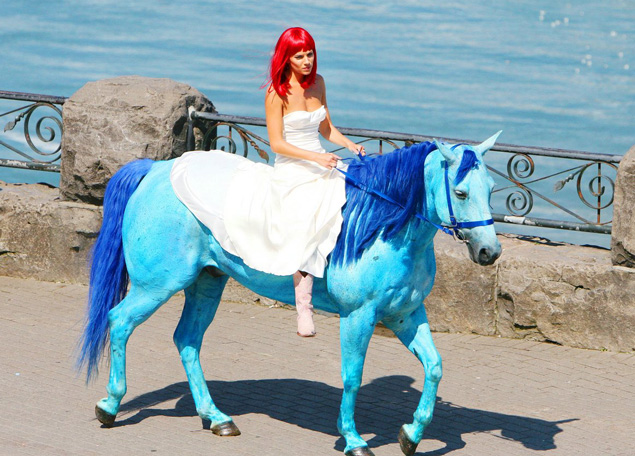 The impossibility of Silas and Camille’s doomed union becomes an unexpectedly poignant metaphor for the impossibility of less fantastical bonds. Camille eventually builds to a common-sense moral: You never appreciate someone until she dies and begins to decompose and smell really bad, while also instilling in you a renewed appreciation for love and life. That message is universal.

Though it begins as a mean-spirited cornpone comedy, Camille gets sappier and sappier until—spoilers!—Silas leaps to his death, plunging into Niagara Falls atop a blue horse alongside Camille so they can be together forever. A man who began the film seeing his upcoming marriage as a death sentence ultimately chooses to embrace death as the only means of being with his soulmate.