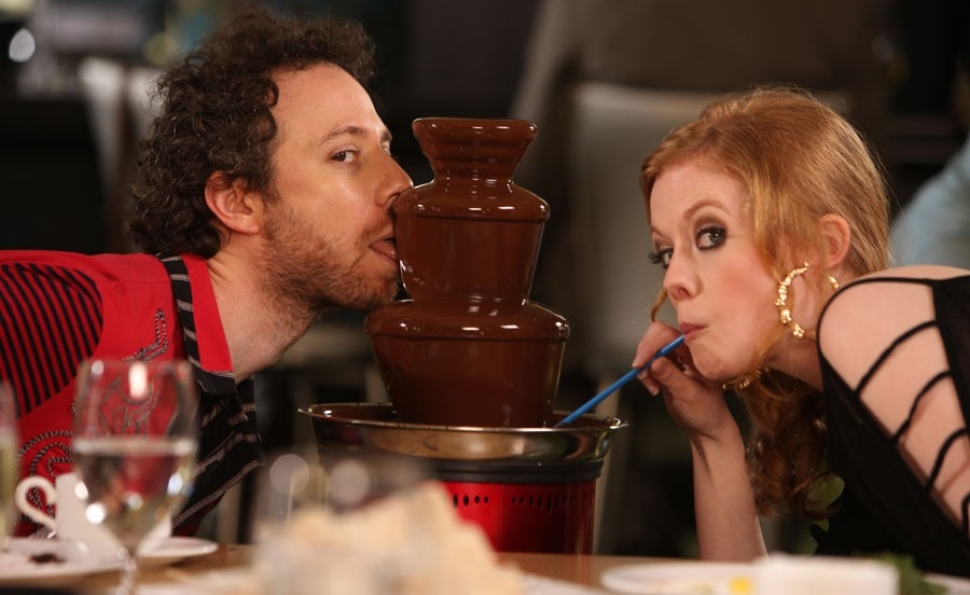 For this entry, we begin with Don Jon, an upcoming film about a porn-addicted New Jersey man played by Joseph Gordon-Levitt, which pits my enormous affection for the charming young actor—who also wrote and directed the film—against my intense hatred of movies about guys whose main problem is that they get laid too much. And maybe are too good-looking.

I plugged Don Jon into the untrustworthy old Netflix recommendation engine, and among the possibilities it coughed up for me was something called The Auteur, a low-budget comedy about a legendary porn director receiving a lifetime-achievement award at a film festival in Portland. This in turn led to another comedy about show business: Freeloaders, a Broken Lizard production that that has been floating around the periphery of my memory since I first heard about it, but flew so far under the radar that I had no idea it had been made, let alone released. I’m a fan of Broken Lizard, and I love movies about the long shadow of fame and the hangers-on that thrive in its seedy depths, so it’s telling that Freeloaders made so little cultural impact that its release completely escaped my attention. Even people who were in the film’s target demographic—music-obsessed Broken Lizard fans—and who work as professional film critics didn’t notice it had been released.

For good reason. Freeloaders is a singularly unsatisfying Broken Lizard movie, in part because it’s hard to tell exactly what Broken Lizard had to do with it. It’s presented as the product of Broken Lizard Enterprises, and the group’s participation was highlighted in the smattering of stories about the film, but unlike previous Broken Lizard movies like Puddle Cruiser, Super Troopers, Beerfest, Club Dread, and even the awful Slammin’ Salmon, none of the group members are credited as directors, writers, or producers. The members of Broken Lizard aren’t even the stars of the film, though they do appear in cameos as the cast and crew of the pornographic motion picture Ass Pirates Of The Caribbean 2: At The World’s Rear End. 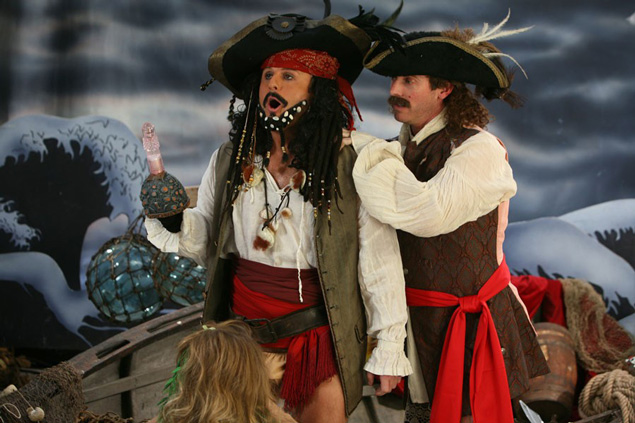 Part of what makes Freeloaders such a weirdly Broken Lizard-free Broken Lizard movie is that it revolves around five dudes and a gal whose lives of never-ending, consequence-free debauchery take a dark turn when Counting Crows’ Adam Duritz, the owner of the mansion where they’ve been crashing for years, decides to get married and sell the place. Convenient, eh? Five lead male roles. Five male members of Broken Lizard. It’s a natural fit. But instead of casting Broken Lizard’s Jay Chandrasekhar, Kevin Heffernan, Steve Lemme, Paul Soter and Erik Stolhanske, a well-known group with decades of lived-in chemistry, the film instead casts Josh Lawson, Kevin Sussman, Nat Faxon, Warren Hutcherson, and Clifton Collins, Jr. in the male leads. It’s like the Sgt. Pepper’s Lonely Hearts Club Band: The Movie of Broken Lizard movies.

Freeloaders holds forth the intriguing, though confusing, promise of Adam Duritz and Broken Lizard teaming for a comedy. Instead, it’s a Broken Lizard movie in name only, in which Duritz literally phones in most of his performance as himself, a super-rich rock star and Caucasian-dreadlocks enthusiast whose biggest/only character flaw is being too generous and gullible when it comes to his friends. Duritz, who also produced the film through his production company, shows up at the end to sing “Hanginaround” over the credits while seated in a chair. (Sadly, this is another highlight for a film that sets the bar incredibly low.) Otherwise, his “role” consists primarily of being a voice at the other end of the phone, calling to check in on the kooky leeches who live in his home. The closest Freeloaders comes to scoring laughs from Duritz is an exceedingly mild gag in which his fiancée encourages him to trade his signature ridiculous dreadlocks for long, flowing locks. Later, Richard Branson drops by the mansion; the “gag” here is that Branson is a super-rich, exciting guy who does cool stuff like travel into outer space.

The breezy comedy opens with its central partiers living the good life on the dime of the perpetually absent Duritz. Their lives are one long kegger minus the hangover, with no end to the good times in sight. All that Dave (Josh Lawson)—the gang’s ringleader, and the film’s leading man solely by virtue of Lawson’s vaguely leading-man handsomeness—has to worry about is the a disapproval of girlfriend Madeline (Olivia Munn), who harangues him while sporting a bikini and furry boots. It doesn’t make any sense at all that the character would lecture her boyfriend while wearing next to nothing, but the filmmakers obviously wanted Munn—whose only purpose in the film is to be nearly naked and dump the hero—in a bikini, no matter how ridiculous the context.

Madeline dumps Dave, whose charmed life takes an even bigger hit when Duritz calls to say he’s getting married. He’ll consequently be selling his massive Los Angeles mansion, and he needs his permanent houseguests to vacate the premises. These residents ranks include Trane (Warren Hutcherson); space cadet Benny (Kevin Sussman), who amasses a fortune selling Duritz’s belongings, then sends it all to a Nigerian with a questionable story promising unimaginable wealth; foul-mouthed Brit Emma (Zoe Boyle); wildcard Vic (Clifton Collins Jr.); and finally, Fritz (Academy Award-winner Nat Faxon), whom the filmmakers forget to grant a single identifying characteristic. Despite being an awesome, totally chill bro, Duritz dispenses ice-queen real-estate agent Carolyn (once and future medicine woman Jane Seymour) to sell the place with the help of assistant Samantha (Brit Morgan). 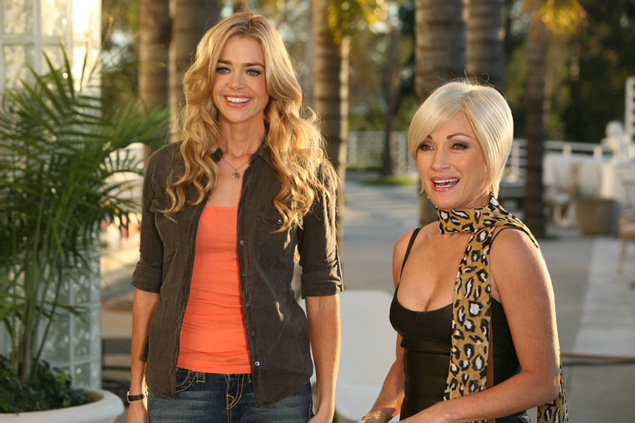 A good 20 minutes of Freeloaders’ 79-minute running time (or about 73 minutes, minus credits) is devoted to the hopelessly whitebread romance between Samantha and Dave. I often find the dramatic elements of lowbrow comedies way more amusing than the jokes, and nothing in the rambling, episodic Freeloaders made me laugh as much as imagining Morgan’s thought process in her big dramatic scene. She’s just starting to trust Dave against her better instincts, because she’s been hurt before, but she’s still open to love and new experiences. Then she visits the mansion and discovers that Ass Pirates Of The Caribbean 2 is being filmed there. This major violation of trust causes her to lose faith in Dave, just as she was developing real feelings for him.

But before Samantha and Dave’s relationship can be tested via unsanctioned porn shoots, Duritz’s gentle ultimatum (essentially, “It would be cool, guys, if you could, like, find another pad to crash at before too long, no biggie, whatever”) sends the kooky quintet on a half-assed scramble to either find another place to live, or raise enough money to buy the mansion themselves. The freeloaders sell Duritz’s belongings and attempt to crash at Dave Foley’s house, only to discover that Foley himself is homeless and looking for a place to crash after his ex-wife cleaned him out. (That gag is more painful than funny, in light of the real-life Foley’s fairly public romantic and financial travails.) With nothing to lose, personally or professionally, Foley becomes the seventh freeloader and falls into a relationship of convenience with Emma, who senses that he may be able to help her on her epic quest to win a green card and continue avoiding honest labor. Caustic self-deprecation is Foley’s default mode these days, and he throws himself into the role of a sad-sack has-been who pawns DVDs of The Wrong Guy (in homemade packages) off on anyone who will take them. There’s an agreeable shamelessness to his performance that implies, “I have been naked in a Uwe Boll movie. Nothing more can hurt me at this point.”

Freeloaders has the ramshackle, lazy, stop-start rhythms of a series of interconnected sketches haphazardly strung together to vaguely resemble a narrative. The filmmakers show distressingly little interest in the rock-star world the film inhabits. In fact, its conception of fame is frustratingly generic: The titular leeches might as well be crashing at the home of Denise Richards, who shows up late in the film as a prospective new buyer of the mansion, and is portrayed as a wealthy, attractive, principled woman whose sole bit of mild self-deprecation involves a winking references to past marital travails.

The Broken Lizard connection no doubt helped get the film made and released, but it also threatens to render the Broken Lizard name as meaningless as National Lampoon’s. It’s a brand, primarily, one that now means less than ever thanks to movies like Freeloaders, which combines the hilarity of Adam Duritz with the insider rock-’n’-roll cred of Broken Lizard. It’s Broken Lizard’s shitty version of Entourage, which is to say it’s Broken Lizard’s version of Entourage, only somehow even more toothless, fawning, and devoid of laughs. And also like Entourage, Freeloaders offers audiences an adolescent fantasy of eternal adolescence in the soothing, warming shadow of celebrity. But it makes a terrible argument for sustained adolescence, and an unintentionally persuasive argument for growing the fuck up instead.