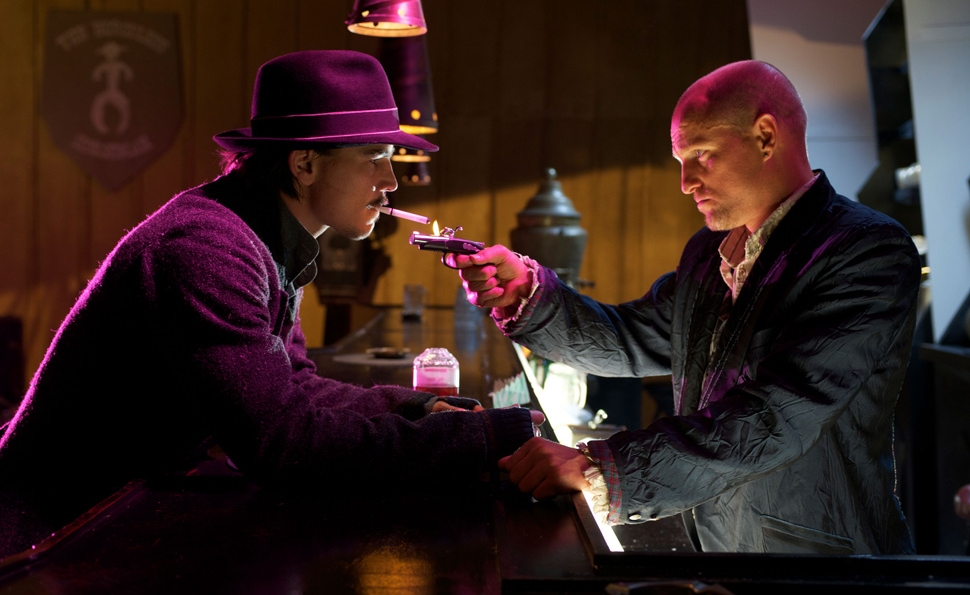 The Tarantino knockoff Bunraku mashes up all the wrong elements

The Path: The Family -->Seven Psychopaths-->Bunraku

Last weekend, I realized my brain has been secretly sending me on a quest to see and write about every bad Quentin Tarantino knockoff in existence, with a special emphasis on what could very generously be deemed the disreputable subgenre’s “golden years,” between 1993 and 1999. There’s a great Chris Rock line about how you always gravitate toward the music that was popular when you first started getting laid, and I think that’s equally true of movies. For me, Tarantino isn’t just a favorite filmmaker; he’s a powerful conduit to my adolescence. I’m not the only one, as evidenced by the flood of direct-to-video imitators he’s left in his wake. So when I looked for fascinating curios linked to The Family—the new Luc Besson-directed, Martin Scorsese-produced culture-clash comedy starring Robert De Niro—for this feature, I deliberately sought out movies in a Tarantino vein.

This led to Seven Psychopaths, Martin McDonagh’s sly dark comedy about chatty lowlifes, and then to 2010’s Bunraku, a film I’d never heard of. I was fascinated by the international co-production’s Tarantino-like hallmarks. It has random celebrities in crazy costumes: Josh Hartnett, Woody Harrelson, Ron Perlman, Demi Moore, Kevin McKidd, Japanese pop star Gackt, and perhaps most randomly of all, Faith No More’s Mike Patton, who provides the wall-to-wall narration. It has an exotic, enigmatic title. And most significantly, it has a genre-mashing premise rooted in the gleeful sleaze of American B-movies, as well as a loving engagement with the iconography and tropes of the trashier depths of international film.

Sure enough, Bunraku bears a distinct Tarantino influence, but it would be more accurate to say that it’s influenced by everything that influenced Tarantino, as well as by films that Tarantino influenced, most notably Sin City. Beyond that, Bunraku feels like it was influenced by seemingly everything: samurai movies, Elmore Leonard, comic books, American Westerns, spaghetti Westerns, pop-up books, videogames, shadow puppets (the film takes its name from a form of Japanese puppet theater), and most perversely, Joel Schumacher’s universally reviled Batman & Robin. I have never seen a film so indebted to Batman & Robin. It’s as if the filmmakers were given sets and costumes left over from Batman & Robin, but only on the condition that Bunraku carry on Joel Schumacher’s tradition of making action-adventure films more flamboyant than Broadway musicals.

Buraku boldly asks, “Why shouldn’t fight choreography feel exactly like dance choreography?” To that end, writer-director Guy Moshe surrounds his head bad guys with red-suited, fedora-sporting henchmen who look like they’re about to break into a chorus line at any moment, and need to be coached not to augment their movements with jazz hands. The first big fight scene involving Killer Number 2 feels like it takes place on the set of an unusually violent Cherry Poppin’ Daddies music video, capturing the bloodiest zoot-suit riot in existence. The set designers and CGI super-geniuses (with artificial constructs like these, it’s hard to know where one group’s work ends and the other begins) favor lurid reds and shocking blues that give the film a sensibility that’s half Schumacher, half origami-themed Las Vegas casino.

Bunraku is first and foremost an exercise in world-building. Stupid, stupid world-building. It feels like the sort of film its creators have been dreaming about and making in their head (and maybe acting out with action figures) for years. That world-building begins with Mike Patton describing the history of civilization as a history of violence. With an audible self-satisfied smirk, he speaks of a village that trembles in fear of The Woodcutter (Ron Pearlman), a mysterious figure who conceals his identity by wearing an “Angel Of Death” costume—although he looks to modern eyes more like a tall man with dirty blonde dreadlocks and a mustache who’s inexplicably wearing a Halloween witch’s hat.

Patton continues, “Although our villain is constantly challenged in his own quarters, it is quite unlikely that his world order will be shaken from within. For such a dramatic change to occur, an outside intervention is needed. An intervention brought about by some means of transportation. Many a time, a train, much like this one. And as is always the case with such trains, there should be at least one silent stranger aboard. Or two.” This leads to the introduction of our heroes, a mustachioed cowboy known only as The Drifter (played by every casting director’s seventh or eighth choice, Josh Hartnett) and an equally enigmatic swordsman named Yoshi, played by Japanese pop star Gackt. The men inhabit a curious, time-warp universe where guns have been outlawed in the wake of devastating wars, a dramatic move that somehow does not result in a sizable decrease in violence; it just forces the violence to be more theatrical and splashy, turning the act of killing into an intricately rehearsed spectacle.

The Gunslinger and Yoshi enter a village ruled by The Woodcutter (thusly named because of his predilection for cutting wood) and protected by his group of nine killers, which would link the film to Seven Psychopaths even if the two movies didn’t share a cast member in the eternally game, undiscriminating Harrelson. They have vengeance on their minds and agendas the film seems to think are cryptic, except there would be no story unless the good guys set out to kill the bad guys. The Gunslinger and Yoshi head to the old-timey Headless Horsemen Saloon, where they befriend a man known only as “The Bartender,” played by Harrelson, with a twinkle in his eye, a smile on his lips, and tongue firmly in cheek. Harrelson appears to be in on the joke even if no one else is; he alone seems capable of delivering lines like, “A man needs a hobby. Mine is pop-up funnies” with just the right combination of grizzled Western conviction and irreverence.

Together, The Gunslinger, Yoshi, and The Bartender set about ending The Woodcutter’s reign of terror and restoring peace and civility to a lawless realm. But even if The Gunslinger and Yoshi weren’t played by actors with zero charisma between them—if you’re looking for an actor to convey the stoic magnetism of a young Clint Eastwood, you can’t do much worse than Hartnett—they’d still feel more like 40 percent of a cross-cultural revamp of The Village People than like an inspired action duo. The clothes make the man, but Bunraku is nothing more than the sum of its costumes, sets, and occasionally inspired production design. There’s no weight or substance to the images or the story; everything is a shiny, attention-grabbing surface that dazzles in short bursts, but grows wearying over the film’s insanely overextended 124-minute running time.

Bunraku often suggests a killer animated short drowning in an endless live-action movie. The narrator and characters both discourse windily about the nature of violence and the essence of fate, but for a film overflowing with homemade philosophizing, Bunraku has nothing to say, and a supremely silly way of saying it. The film’s giddy excess feels random rather than purposeful. Late in the film, The Gunslinger and a henchmen for The Woodcutter square off in a fight on a trampoline because, well, why the hell not have a fight on a trampoline? Hell, I was so impressed by the fight on the trampoline that it ruined me for all fights that don’t happen on trampolines. Now, whenever I see a fight, no matter how exciting, I’ll just be wondering why it isn’t happening on a trampoline.

The trampoline fight is Bunraku in a nutshell. It’s powered by a sense of “Why the hell not?” that could be liberating and fun if the rest of this exhausting, surprisingly unenjoyable film didn’t provide such a damning and conclusive answer. Bunraku is at least bad and bizarre in a personal, distinctive manner. (Perhaps that’s more than The Family will be able to say.) It aspires to be an eye-catching cinematic pop-up book. But even pop-up books for easily distracted children have deeper characterization and better storytelling.