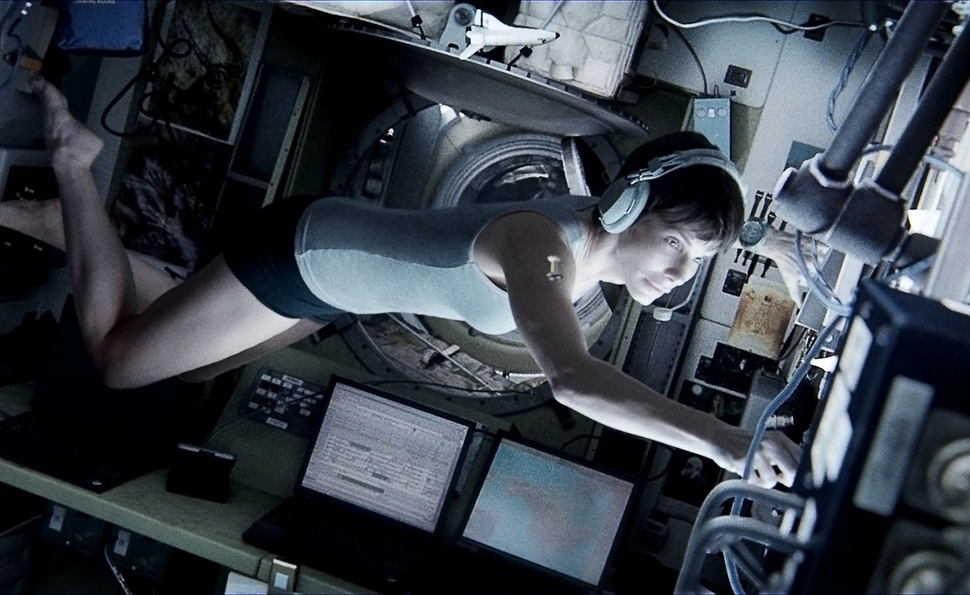 “Show me something I’ve never seen before” is the cinephile’s mantra, and this year’s Toronto festival is serving up movies that buck convention in a wide variety of ways. Even the big-budget spectacles flirt with the avant-garde. Arriving here straight from its world premiere in Venice, where critics exhausted every astronomically derived superlative in the English language (and likely all the other languages as well), Alfonso Cuarón’s Gravity turns out to be a movie so visually unprecedented that no verbal description can begin to do it justice. Nonetheless, here goes: This is the film Cuarón, with his penchant for moving the camera freely through every axis, was born to make. Set almost entirely in zero-g, Gravity is one of the most awe-inspiring F/X showcases in cinema history; its lengthy opening sequence alone, in which three astronauts (Sandra Bullock, George Clooney, and Dead Meat) are unexpectedly pelted with satellite debris while working on the Hubble Space Telescope, exhibits a command of space, in both the formal and literal sense, that’s breathtaking (figuratively for us, literally for the characters). Cuarón still likes to show off—one shot that travels into Bullock’s helmet, briefly assumes her point of view, then drifts back out again, all without a cut, serves no real purpose except to impress—but his free-floating, untethered approach has never been better justified. At the same time, Gravity respects physics, turning Bullock and Clooney’s efforts to save themselves into a series of improvised real-time calculations.

In short, it’s one hell of a ride. The film does suffer a bit from its marked similarity to J.C. Chandor’s All Is Lost, which is likewise concerned with the nuts and bolts of survival in the middle of nowhere, but eschews dialogue (it’s Robert Redford, alone and nearly silent, for the duration), backstory, and any sort of “character arc” apart from not dying. Those are precisely the areas in which Gravity sometimes falters. But if All Is Lost wins on dramatic purity, Gravity has the decided edge when it comes to the knocking off of socks. Both films open commercially next month, and would make a superb double-bill: can-do initiative vs. the unforgiving expanse.

No other movie merits ready comparison with my favorite Toronto experience so far, but I was reminded, improbably, of The Magnetic Fields’ 69 Love Songs. Just divide by three: Celestial Wives of the Meadow Mari, directed by Russia’s Alexey Fedorchenko (Silent Souls), features 23 unrelated vignettes, ranging from 10 minutes to 30 seconds, involving women whose names start with the letter ‘O.’ Some of these bite-size stories are uproarious, some are tender, and plenty of them, frankly, are just plain nuts. As in Silent Souls, bizarre rituals play a prominent role; the various wives (actual or prospective) struggle with a tradition requiring them to blow a massive horn announcing their first period; spurned suitors who sic zombies on them even after they leave town; and curses that implant a rare bird in their vagina every time their husband tries to insert anything in it. Many of the bits don’t make any rational sense, or even necessarily “go anywhere,” but that’s part of the movie’s overall goofy charm; like 69 Love Songs, it’s more enjoyable as a bravura stunt, experienced in its entirety, than “track” by “track.”

Equally audacious, but far more sober, is Cambodian filmmaker Rithy Panh’s memoir The Missing Picture, about his experience growing up at the mercy of the Khmer Rouge. Because all of the archival footage from that period was shot by the Communists, serving strictly as propaganda, Panh depicts what actually happened to his family via a series of elaborate tableaux, with carved and painted wooden figures posed in various abject positions. Often, exceedingly grim stories like Panh’s can feel somewhat oppressive, but the layer of abstraction these impassive dioramas provide somehow render his memories (spoken in elegant voiceover by a French actor) all the more poignant. And just when the device seems to be losing its capacity for inspiring cognitive dissonance, Panh will mix it up by superimposing his little puppets onto actual stills from the period, or showing them in the process of being hand-crafted, or even dispensing with them altogether for a while in favor of more traditional documentary materials (though there are no interviews or other voices). He’s addressed his country’s brutal history several times before, in docs like S-21: The Khmer Rouge Killing Machine and Duch, Master Of The Forges Of Hell, but just as Art Spiegelman’s Maus (which depicts the Holocaust using mice for Jews and cats for Nazis) found a way of startling readers out of their historical-nightmare complacency, so, too, does The Missing Picture. Some things are so horrific that they perhaps need to be rendered inhuman.

Sorry, bit of a downer. Let me lift your spirits by recommending the little-seen, flat-out adorable films of Mexican director Fernando Eimbcke, whose Duck Season and Lake Tahoe established him as his country’s drolly deadpan answer to Jim Jarmusch. Eimbcke’s latest film, which sports the irresistible title Club Sandwich, isn’t as overtly funny as its predecessors, but compensates with a lovely, bittersweet undercurrent. Set entirely at a low-rent motel, it finds a youngish single mother (hip enough to sport a pierced eyebrow) and her teenage son spending their off-season vacation together, in a relationship that seems a bit overly intimate. When the boy, Hector, develops an interest in a girl his own age who’s staying at the same motel with her own family, Mom’s fit of jealousy is perhaps predictable, even if its manifestations—cannonballing the lovebirds in the pool; suggesting a sadistic Mexican variation on Truth Or Dare—are anything but. The movie’s masterstroke, however, is the way it gradually shifts perspective, becoming the rare coming-of-age story told from a parent’s increasingly melancholy (yet at the same time accepting and proud) point of view. In this familiar context, the change in emphasis achieves a seismic force; among other things, Club Sandwich, which involves plenty of food, features the saddest bag of vending-machine potato chips of all time. “Show me something I’ve never seen before, TIFF.” Mission accomplished, in spades.

Also seen: I’d planned to devote prime real estate above to The Strange Colour Of Your Body’s Tears, Bruno Forzani and Hélène Cattet’s followup to their superb giallo homage Amer, but it turned out to be a case of sophomore slump—great setpieces early on, but severely diminishing returns as the filmmakers attempt to sustain a feature-length narrative. Catherine Breillat’s Abuse Of Weakness, which fictionalizes the director’s crippling stroke and subsequent loss of nearly $1 million to a notorious con man, stars Isabelle Huppert as her stand-in; it can be exasperating, at times, but culminates in a final scene of tremendous power. Mathieu Amalric is in top form as a horndog college professor—and possible murderer—in the Larrieu brothers’ typically tantalizing and mysterious Love Is The Perfect Crime, though a third-act reveal pushes the film in a more mundane direction. On the flip side, Xavier Dolan’s Tom At The Farm indulges off-kilter weirdness for its own sake in a story—adapted, inelegantly, from a stage play—about a young man who goes to the country to attend his gay lover’s funeral and gets sucked into the vortex of the dead man’s disturbing family.

I mostly agree with Scott about Jafar Panahi’s Closed Curtain—it’s an intriguing experiment in pointed meta-narrative, but I dearly hope that Panahi will be released from house arrest soon, so that he can go back to making films about subjects more compelling than his inability to make films. I mostly disagree , by contrast, with the Locarno jury, which gave its top prize to Albert Serra’s Story Of My Death, a pseudo-history of Casanova that crosses his exploits with those of Dracula, yet still feels dry as dust. Critics at Cannes raved about Lav Diaz’s four-hour epic Norte, The End Of History; after bailing on it there, I felt obligated to see the entire thing here, and was surprised to find Diaz belaboring an insultingly schematic class distinction, in which wealthy, indolent ideologues metamorphose into sociopaths at the expense of the noble poor. (Nobody else seems to interpret it that way, for the record. But I can’t figure out why not.) Ralph Fiennes’ The Invisible Woman will appeal to those interested in learning all about Charles Dickens’ lengthy affair with a much younger actress, but will bore anyone who shudders at the mere mention of the word “biopic.” And you’ll soon have a chance to see Parkland yourself, but disregard the folks claiming it’s exploitative and vapid—it’s actually a serviceable (if little more than that) blow-by-blow account of the JFK assassination, as seen from the perspective of various folks on the outskirts. Festival overreactions can work both ways; this film is being treated too harshly.