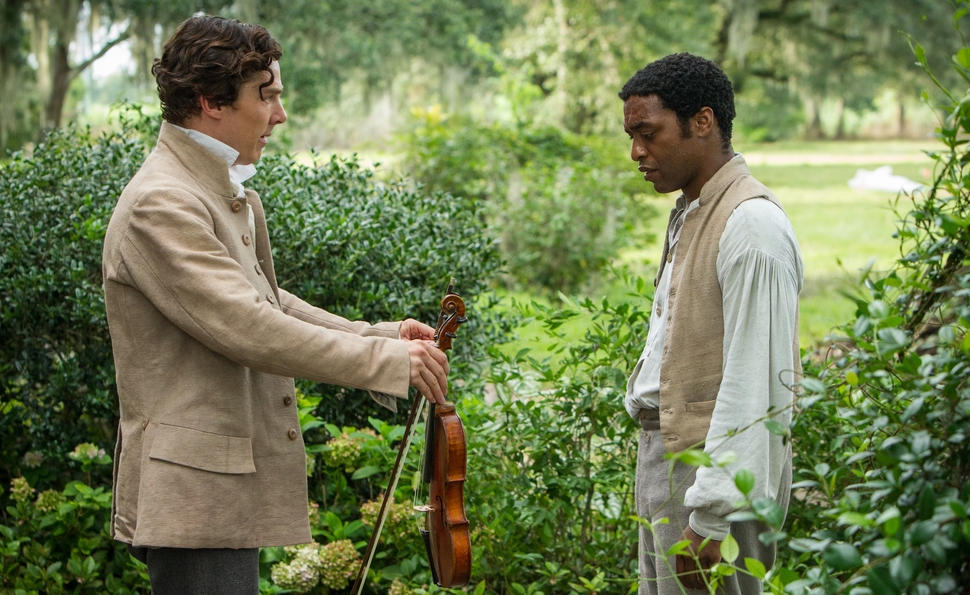 In an article that ran in Smithsonian magazine last year, the magician who calls himself “Teller” explained some of the enduring secrets of magic, one of which is, in Teller’s words, to “make the secret a lot more trouble than the trick seems worth.” In other words, a lot of what seems “magical” to the untrained eye is the result of a ridiculous amount of preparation, rehearsal, and technological know-how. That’s something I’ve been thinking about a lot over my first few days at the Toronto International Film Festival—and not just because Teller and his partner Penn Jillette have a movie here at the fest, called Tim’s Vermeer. More than a few films this year have been raising questions about where the magic lies when it comes to creating a piece of art: in some intangible genius, or in the hard grind of craft.

Tim’s Vermeer raises that question both directly and indirectly. It’s a documentary about Penn and Teller’s friend Tim Jenison, a wealthy inventor who helped create Video Toaster and LightWave 3D. Inspired by David Hockney and Philip Steadman’s theories about how Johannes Vermeer might’ve achieved pre-photography photo-realistic effects through optics, Jenison spent years (and $$$) creating his own 17th-century projection device, with the intention of painting his own Vermeer. What he came up with is astonishing: an elaborate mirror-and-lens system that turns a painter into a human camera. Jenison argues that his contraption removes all the subjectivity from art, because any painter who follows his methods will come up with finished work that is nearly identical. Penn and Teller carry that argument even further, saying that the technology, and the process, is the art.

I might’ve taken a different angle, suggesting that in Vermeer’s case, the staging of his paintings mattered, and that he was the 17th century equivalent of a movie director. But while Tim’s Vermeer is a highly entertaining and provocative film about an amazing experiment—and one better seen than read about, it’s important to note—the documentary is also very straightforward in its presentation and aims. It doesn’t throw very many curveballs. It’s a good test of Jenison’s speculation about Vermeer, but not a very good test of his theory that art itself can be rendered objectively.

Also, the film itself is largely artless, which means that while it’s enjoyable, it’s also a little frustrating—as is Jodorowsky’s Dune, a documentary by Frank Pavich that details Alejandro Jodorowsky’s failed plans to mount a mind-blowing film adaptation of Frank Herbert’s sci-fi bestseller Dune in the mid 1970s. The images that Jodorowsky came up with (with the help of his conceptual artists Jean “Moebius” Giraud, Chris Foss, Dan O’Bannon, and H.R. Giger) are stunning, as are the director’s anecdotes about how he convinced Salvador Dali and Orson Welles to sign on to the cast. There’s an important message here too about how Jodorowsky himself has been sort of written out of film history, even though his mind-blowing El Topo and The Holy Mountain were international hits of such magnitude that his Dune had the potential to cement big-budget psychedelia as a viable genre. (As it was, the pieces he assembled for Dune were later stripped to make other movies, from Star Wars to Alien.) But a significant amount of Jodorowsky’s mad genius gets lost in this doc’s fairly ordinary approach. Put it this way: I would’ve liked to have seen Jodorowsky’s Jodorowsky’s Dune.

Nicole Holofcener tries very hard not to go for the obvious in her surprisingly high-concept comedy Enough Said, which stars Julia Louis-Dreyfus as a divorced masseuse who inadvertently begins dating the slobby ex-husband (James Gandolfini) of a classy client (Catherine Keener), and then finds her opinion of her new boyfriend getting poisoned by her new friend. As always, Holofcener carefully tries to avoid cliché, using a hooky premise more to illustrate how middle-aged divorced folks (and even middle-aged married folks) need a lot of motivation to pursue romance. But either because Dreyfus has trouble with Holofcener’s low-key rhythms or Holofcener has trouble figuring out how to make this material funny without being quippy, Enough Said is one of her most fitful, least cohesive films. It’s still charming and sweet and true—and Gandolfini is heartbreakingly great in one of his final roles—but yet again during these first few days of TIFF, I found myself pining for more cinematic flourish.

Then again, it’s possible to go too far in the other direction. Ron Howard’s Rush is a true-sports story slathered in stylistic excess and hokum, even in the scenes that take place away from the competition. In the first hour especially, Howard seems to be trying too hard to make the story of 1970s Formula 1 racing stars James Hunt (Chris Hemsworth) and Niki Lauda (Daniel Brühl) into an overpowering sensory experience, and mostly just comes up with a corny evocation of their era. But damned if the movie didn’t win me over anyway, for a few reasons. For one thing, the director of Grand Theft Auto has always had a pretty good idea of how to stage and shoot cars zooming about. The second half of Rush concerns itself mostly with the incredibly tight points-battle between Hunt and Lauda throughout the 1976 season, and those racing sequences—some of which are shot with a subjective camera, in bad weather conditions—are white-knuckle. There’s also a surprising earthiness to Rush, with more nudity and gore than one might expect from a Ron Howard film, emphasizing the frailty of the human body and the unreliability of machines. But what really makes Rush work is the way screenwriter Peter Morgan sets up another one of those dichotomies like I mentioned above, that everything to do with what makes a person or a piece of art great. In Rush, the split is between the calculating, outcome-oriented Lauda and the reckless, live-for-now Hunt, and the different ways that these two men define success.

That’s concept of what constitutes a “win” also haunts the hero of Steve McQueen’s historical epic 12 Years A Slave, Solomon Northrup (Chiwetel Ejiofor), a well-to-do black musician from Saratoga, NY who in 1841 was deceived by some business associates and sold into slavery in Louisiana. An intense, episodic American nightmare, 12 Years A Slave follows Solomon from plantation to plantation, as he does what he must to survive, often at the expense of his moral code and his empathy. It’s the story of a man who’s patient perhaps to a fault, and it’s told by a director (working from a John Ridley script) with the assurance to hold his camera on his cast and let them build a scene, for as long as it takes. In addition to Ejiofor, 12 Years A Slave has a host of excellent actors often in roles that amount to cameos, but the other major parts are played by McQueen regular Michael Fassbender, who makes evil look both scary and pathetic as an eccentric, drunken planation owner, and Benedict Cumberbatch, who plays a benevolent master whose kindnesses are, in a way, more cruel. It’s a rough film, and stomach-turningly violent at times, but it’s pitched just about perfectly throughout, with varying tones, and a narrative that pulls the viewer along. There’s no “anyone could do it” with 12 Years A Slave. This is a major motion picture, by an actual artist.

Also seen: Even after all the above, I didn’t mention two of other favorite films so far, both of which land just a notch below 12 Years A Slave in my early estimation. (All these festival opinions are subject to change, with more time for reflection and, ideally, a second viewing.) Clio Barnard’s The Selfish Giant is a familiar piece of British miserablism, about two teen troublemakers who earn money stealing scrap metal and wire, but Barnard instills a bleak story with real humanity, and an understanding of how juvenile delinquents can be untamable beasts yet still have big hearts. The Indian melodrama The Lunchbox is also a winner, telling a story about a neglected housewife and the aging, embittered office worker who starts accidentally receiving the food-deliveries she meant to be sending to her husband. It’s a crowd-pleaser through and through, but like Enough Said it’s also sensitive to how people’s desires and ideals change as they get older. Plus it’s imbued with a deep yearning for the handmade and the personal. Scott mentioned Prisoners yesterday, and while I agree with Scott that this movie is a tawdry pulp mystery that takes itself too seriously, I also found its craft (there’s that word again) to be impeccable, and hope Jake Gyllenhaal gets the attention he deserves for a performance so un-flashy yet so perfect.

As long as we’re back on the subject of craft, I should say that while I admired a lot about the avant-garde documentary Manakamana—which consists of 11 static takes of pilgrims and tourists taking long cable-car rides to and from a mountaintop temple in India—I had a hard time getting past its structuralist approach, which mostly takes what it gets, with little aesthetic intervention aside from some enhancement on the sound-design side. That said, Manakamana is both calming and imagination-sparking, as it forces the viewer just to look at human faces for 10-minute stretches, whether those faces are talking excitedly or just staring straight ahead. Lastly, I found the shambling experimental film La Ultima Pelicula to be very much like the films it's emulating: the late ‘60s and early ‘70s undergrounds by the likes of Dennis Hopper, Brian De Palma, Dusan Makavejev, Norman Mailer and, yes, Alejandro Jodorowsky, whose early pictures are often more like sketchbooks than fully realized movies. Raya Martin and Mark Peranson’s salute to the end of film—featuring a fatuous filmmaker (Alex Ross Perrt) shooting the last remaining film stock in the days leading up to the Mayan apocalypse—is sometimes beautiful and sometimes funny. But it’s mostly overly futzy.