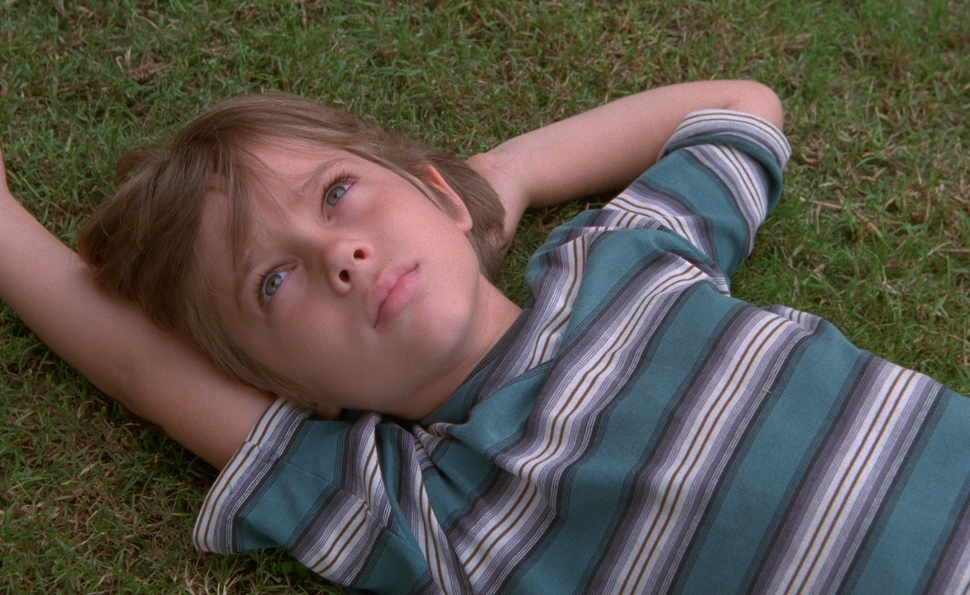 When the final Harry Potter movie came out, my wife and I were taken aback by how many college-aged kids we saw swarming the multiplex on opening weekend. And then we realized: These folks were in grade school when the whole Harry Potter phenomenon began. For my wife and I, Harry Potter had been a very small part of our adult lives, but for these moviegoers, finishing up the series was a rite of passage, closing out something that had taken up a lot of their time, for roughly half of their existence.

Richard Linklater’s 12-years-in-the-making slice-of-life Boyhood attempts to do some things that have rarely been tried in a movie, and one of its most useful is just that kind of signposting: tracking the pieces of popular culture and daily life that matter to people for a long time, versus the pieces that come and go. Boyhood begins in 2002 and ends in 2013, following a boy named Mason (played by Ellar Coltrane) from roughly age 7 to age 18, as he and his sister Samantha (Lorelei Linklater) split time with their mother and father (Patricia Arquette and Ethan Hawke). Linklater filmed a little bit of the movie every year, intending to do what usually only long-running TV series and some documentary films have done: watch a child grow up on-screen. But Linklater also paid attention to the music, the technology, the politics, the fashions, and the movies of these times—including the Harry Potter books, which Mason is having read to him in one of the first scenes in the movie and which a few years later he’s lining up at midnight to buy. Linklater had no way of knowing which of these trappings of the times might still be meaningful to audiences long after they were filmed. (For example, at one point Mason’s dad takes him to see Roger Clemens pitch, unaware that an all-time great will be tainted years later by legal/PED woes.) But Linklater did instinctively understand that this was an important part of the project: to track the changes in not just his child actors, but also the world around them.

I have to admit that Boyhood wasn’t anything like what I’d expected—even though it’s every inch a film by the man who made Slacker, Dazed And Confused, and the Before Sunrise/Sunset/Midnight trilogy. I’ve been hearing about the film for years, and knew the gimmick (if it’s okay to call it that). But I was still surprised and even pretty delighted to see a movie so ostensibly ambitious also be so stubbornly, meaningfully shapeless. Boyhood is practically devoid of callbacks, and mostly eschews anything like a plot. The one brief attempt at a dramatic narrative arc—when Mason’s mom marries a pushy alcoholic—is so unlike the rest of Boyhood that it threatens to derail the film. Boyhood is more about the people and preoccupations that drift in and out of a person’s life, with no grand design. Mason has a succession of friends and girlfriends, and a succession of grown-ups who lecture him on how to live (in that familiarly Linklaterian way). But he muddles along through 12 years of his life as so many young people do: lacking the perspective to understand what’s really important and what’s fleeting.

Ordinarily, I hesitate to give an uneven movie credit because “Hey, life is uneven”—and so I’m not fully excusing the scenes and performances in Boyhood that fall flat. But at the same time, part of this big experiment of Linklater’s is to document his own development as a filmmaker, which is why it shouldn’t be surprising the the film gets more assured as it goes along. And again, Boyhood’s bigger than just Mason. It’s also about Texas. (It’s set all over the state, and represents the state’s gun culture and religious communities non-judgmentally.) And it’s about parents who spend so much time pushing their kids toward independence that they rarely take the time to reflect on what they’re eventually going to lose, when those kids no longer need them. It would’ve been easy for Linklater to play on the audience’s sense of sentiment by continually reminding viewers of what his characters used to look like and how they used to be. But that’s not his game here. I know from experience—and I bet Linklater does, too—that mere pictures don’t do justice to a child’s changes. Kids’ lives happen when they’re not posing.

I’m even more impressed with Linklater’s dogged commitment to minutiae in contrast to two of the films that I’ve liked the least over the past few days. Jeff Preiss’ directorial debut, Low Down, is an adaptation of Amy Albany’s memoir about growing up in squalid mid-1970s Hollywood with her heroin-addicted jazz pianist father. Elle Fanning plays Amy, while John Hawkes plays the junkie, and though Preiss nails the atmosphere of a dingy apartment complex, populated by prostitutes and castoffs, the film plays like a string of “Here’s how shitty my childhood was” anecdotes, always cycling back through the same pattern of things-may-be-looking-up-no-wait-I’m-on-drugs-again. Charitably, I could say the movie is like jazz in that way, noodling around a single motif. Realistically, I’d say there’s more of life in all of its fullness in any given minute of Boyhood than there is in all of Low Down. (John Hawkes is good though. John Hawkes is always good.)

And then there’s Laggies, the latest from Humpday/Your Sister’s Sister/Touchy Feely director Lynn Shelton. I loved Humpday, was largely indifferent to Your Sister’s Sister, and hated Touchy Feely; Laggies I’d slot somewhere between the latter two. Keira Knightley plays a directionless young woman who panics when her longtime boyfriend proposes, and reacts by deciding that she’d rather hang out with a random high-school girl she’s just met (played by Chloë Grace Moretz) than spend another minute with the circle of friends she’s had since high school. That’s not a bad premise for a comedy, but aside from a livewire performance by Sam Rockwell—who plays the teen’s cynical, quick-witted divorced dad—there’s nothing in Laggies that’s not predigested. The movie’s a lot like Frances Ha but without any of the empathy toward the people who have to put up with a self-absorbed heroine. It’s telling that at one point Laggies defines a grown-up relationship as involving two people “on the same side of what seems stupid.” Compassion, responsibility, generosity… none of these factor heavily into the film’s vision of what it means to be an adult. It's more like high school with a different set of cool kids.

Look, film festivals aren’t competitions (well, except for the competition part.) Just because some filmmakers don’t have Richard Linklater’s gifts for converting real life into compelling cinema doesn’t mean they don’t have other gifts to compensate. It’s important to meet each film on its own level, and appreciate what’s there. But when I’m watching four or five movies a day, my tolerance for the contrived diminishes, and I start looking for something original, and true.

David and Nathan Zellner’s Kumiko, The Treasure Hunter qualifies as both, even though its surface has very little to do with real life. In this film—even more than in their previous feature, Kid-Thing—the Zellners are working in the abstracted deadpan style of Jim Jarmusch and Aki Kaurismaki, where people don’t behave or react the way that “normal” people would. The protagonist, Kumiko (Rinko Kikuchi), is a deeply sad Tokyo loner who unearths a videotape while combing the beach, and then becomes obsessed with interpreting its contents. The tape? Fargo. The center of Kumiko’s fascination? The movie’s suitcase full of money, buried in the snow. Kumiko is convinced she can pinpoint the location of the suitcase, and recover the treasure.

Even though I’m familiar with the Zellners’ work, it took about a half-hour or so for me to get on Kumiko’s wavelength. The early scenes in Japan struck me as over-mannered, stretching out silences indulgently. Once Kumiko lands in Minnesota, the pace picks up a bit, there’s more dialogue, and the movie becomes more stunning visually, as the Zellners follow the underprepared (and underdressed) Kumiko into the American wilderness. The culture clash is an important part of the second half of Kumiko—there’s some humor that plays off of “Minnesota nice,” but without the broad accents of Fargo—but even more important is how invested Kumiko is in proving that what she saw in a movie is “real.” There’s a spooky poetry to the climactic sequences of Kumiko, as a one-of-a-kind individual disappears into the snow, in search of a memorable movie prop that also disappeared into the snow. Kumiko doesn’t go for verisimilitude like Boyhood, but it understands how pop culture compels people: to alter their schedules, to try and remember their pasts, and to embark on obsessive quests for genuine meaning.

Also seen: I had my first walkout of the festival with A Girl Walks Home Alone At Night, writer-director Ana Lily Amirpour’s much-touted “Iranian vampire western.” The 30 minutes I watched of the film left me completely cold; it struck me a thin, straight-to-video genre piece treated with the ponderousness (but not the artistry) of Claire Denis. Later in the day, though, I was riding on a shuttle bus with Drew McWeeny of HitFix and he gave me an explanation of why he liked the movie, in a way that made me wish I’d watched to the end. I still don’t think I would’ve enjoyed A Girl Walks Home, but I least I could’ve offered an informed refutation. (Or maybe I would’ve seen what Drew saw in the film. The version he described sounds like something I’d want to see.)

There’s been a mixed critical reaction here in Park City to writer-director Justin Simien’s Dear White People, a provocative comedy in the tradition of Spike Lee’s early films, where the subtleties of racial differences fuel honest, interesting conversations. Myself, I loved the dialectical aspects of Dear White People, and would’ve gladly followed the main characters—a gay journalism student, a mixed-race firebrand, and the upper-class son of a dean—through a series of campus capers, perhaps in a TV series. But as a movie, Dear White People has too many story strands, sloppily woven together. And Simien’s really rough as a visual stylist. There were times during the film where I found it hard to follow the simple logistics of a scene, just because of the way it’d been blocked.

I’ve seen a few other films that I don’t want to relegate to the “also seen” section, so I’m going to take them back up in my Day 7 coverage. If you’re interested in hearing about The Guest, Cold In July, and The Babadook—and if you’re a fan of horror/suspense, you should be—check back in two days.