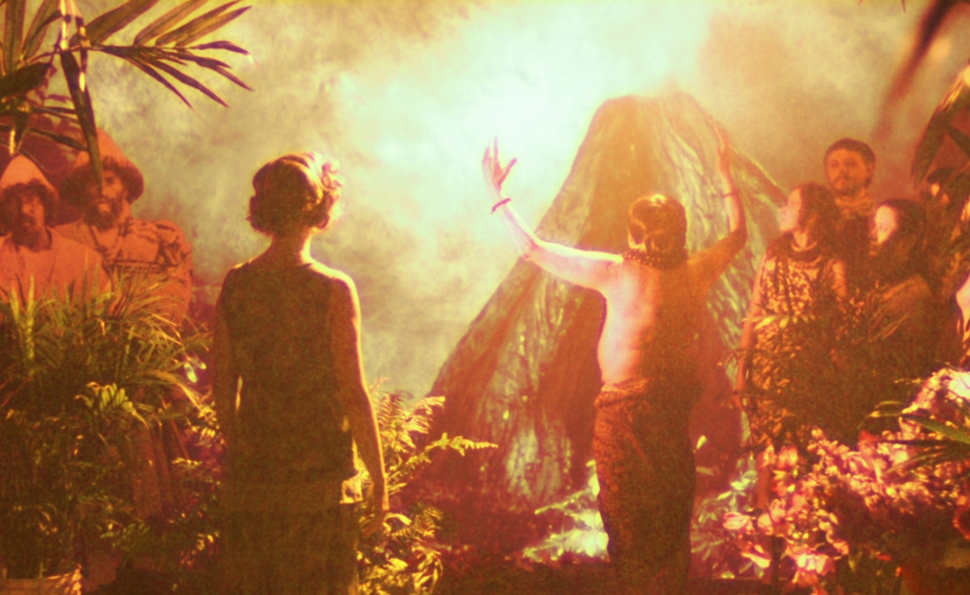 Sleep is a luxury at a film festival, which can be problematic for those of us who suffer from sleep disorders even in more relaxed circumstances. For a couple of decades, my particular bugaboo has been sleep paralysis—an annoying, sometimes frightening condition in which the body has shut down all voluntary motor control (so that you don’t act out your dreams, it’s theorized) but the brain erroneously remains, or suddenly becomes, conscious. So I was tremendously excited to discover, about midway through the festival, that The Nightmare, a new documentary by Room 237's Rodney Ascher, is all about that very subject. But I was also puzzled, since my experiences, while initially pretty terrifying, didn’t seem remotely cinematic—it’d just be a dude lying on a bed, eyes closed, not moving for several minutes. Visually, it’d be completely indistinguishable from sleep. How could Ascher make a movie out of that?

Turns out I’ve gotten off comparatively light. Of the eight people (all in the U.S. and U.K.) Ascher interviewed for The Nightmare, only one describes something I recognize: a vague feeling, while paralyzed, that some malevolent being is in the room, watching you, getting closer and closer. The others all actually see malevolent beings in the room. For most of them, these things appear as shadows in human form, but one guy has regular visits from two creatures that resemble the classic “gray” alien, except made of static (it’s been suggested that cases of people who think they’ve been abducted from their beds by aliens involve sleep paralysis), and another is tormented by a giant mechanical claw that attacks his genitals. These are’'t nightmares, remember, despite the movie’s misleading title—they’re hallucinations, occurring during consciousness. Or, alternatively, they really happen, as some of the interviewees firmly believe. Ascher recreates each description, using actors, and he does cheat a little by having the paralyzed victims twitch desperately to signal that they’re awake. (When I’m paralyzed, I literally cannot move a muscle.) But, then, he’s not necessarily striving for accuracy—all of the recreations occur on the same rather cheesy-looking set, and Ascher frequently, deliberately calls attention to the camera, or to the crew, or to himself as the interviewer, sitting in a dark corner of the room. The Nightmare never consults any experts, or even really defines what sleep paralysis is. Instead, it simply strives to convey what the experience is like for these folks, all while suggesting that Ascher’s intrusion into their unconscious, by way of this film, is another form of assault by a seemingly friendly entity (an artist, one's own brain). It’s some spooky shit.

A more benign form of oneiric madness animates Guy Maddin's hilarious, exhilarating, slightly exhausting The Forbidden Room, which was the penultimate film I saw here and instantly became my favorite of this year's fest, albeit just by a hair over The Witch. Though shot entirely digitally, and co-directed with Evan Johnson (who worked as a camera operator on My Winnipeg), it continues Maddin’s career-long obsession with exploring the textures and visual vocabulary of early cinema; the opening credits alone are bonkers, often cycling a single name and job description through two or three different, recognizable archaic styles. Maddin’s preparing you for his shape-shifting narrative, which starts out as the tale of four men trapped in a submarine at the bottom of the ocean, then suddenly introduces a woodsman who somehow “wanders into” the sub. The movie leaps back to tell his story, and just keeps on leaping. During a Q&A following my screening, Maddin said The Forbidden Room’s structure was inspired by an old Robert Mitchum movie called The Locket, but its labyrinth of nested tales-within-tales-within-tales, which at one point gets something like eight or nine levels deep (it’s hard to keep track), calls to mind the classic 1965 Polish film The Saragossa Manuscript. And as in that film, the Russian-doll structure is at once a limitation and a great strength: It’s nearly impossible for a movie that keeps resetting itself to achieve any cumulative power, but it’s also nearly impossible for it to get stale or bogged down. This is essentially a madcap series of loosely connected Maddin shorts, populated with an amazing cast of mostly French stars: Mathieu Amalric, Geraldine Chaplin, Charlotte Rampling, Jacques Nolot, Maria de Medeiros, Caroline Dhavernas, Ariane Labed, Adèle Haenel, on and on. (The film was partly shot in Paris, at the Pompidou Centre, in public, with spectators casually observing!) At over two hours, it’s easily Maddin's longest effort, yet it whizzed by faster for me than did shorter pictures like Brand Upon The Brain! and Keyhole; if a particular narrative thread starts feeling tiresome, rest assured that it’ll be replaced in short order by something equally demented. And the hilarious intertitles never cease. As the doomed submariners eat flapjacks that they hope may contain air pockets that will keep them alive: “Hopeless men, hopelessly chewing…”

There’s no credible segue from those two films to Bobcat Goldthwait's Call Me Lucky, so I won’t try to force one. This is Goldthwait’s first documentary, and it tackles a subject close to his heart: Barry Crimmins, a stand-up comic with a bitterly political bent who’s as renowned for his passionate activism as he is for his act. (Goldthwait’s nickname was inspired by Crimmins, who was known early in his career as Bear Cat. It didn’t stick; Bobcat did.) Crimmins more or less created the Boston comedy scene in the ‘80s, founding two clubs and discovering people like Steven Wright and Paula Poundstone. After achieving some limited success of his own, however, he grew fed up with the entertainment machine and retreated to a cabin in the woods, from which he emerges mostly to lend his angry voice to causes he cares about, like the fight against child pornography (he testified before Congress during the era of AOL chatrooms that served as pedophile hangouts) and Cindy Sheehan’s campaign opposing the Iraq War. Goldthwait has superb access to Crimmins, thanks to their long friendship, and Call Me Lucky serves as a fine introduction for those, like me, who’d never heard of him. It has two significant problems, though. One is that it’s wildly hagiographic, with far too many talking-heads interviews in which folks like Patton Oswalt and Marc Maron gush about what an amazing guy Crimmins is. The other is that Crimmins’ anger is fueled, in part, by his having been sexually abused as a child, and Goldthwait treats this sad personal history as a plot twist, unveiling it roughly halfway through the film after hinting for a while as some deep, dark secret. (Various interviewees allude to Crimmins having been raped, but their sound bites are edited so that it’s not clear what they’re referring to, until the big reveal.) Documentaries have been employing narrative techniques (and vice versa) more and more over the past couple of decades, but this is a particularly crass instance of a person’s real, lingering pain being utilized as a means of kicking the movie up another notch. As deliberately tasteless as Goldthwait’s previous films (Sleeping Dogs Lie, World’s Greatest Dad, God Bless America) have often been, it’s Call Me Lucky, I'm sorry to say, that left the nastiest taste in my mouth.

Also seen: Before heading home, I managed to catch up with Noel’s two favorite films of Sundance ‘15, both of which I liked, though with more reservations. James White is scrupulously observed, and always feels truthful; moment to moment, there’s not a complaint that I could make, and certain scenes, like the one in which James applies for a job at New York magazine and is compassionately informed (by Ron Livingston, in a superb and too-brief turn) that he’s way too fucked up to be employable, are riveting. Yet I never felt as if director Josh Mond or lead actor Christopher Abbott dug very deep into the title character’s broken psyche. Rather, the film plays as an experiential exercise: This is what it’s like to watch your mother slowly die while you’re still reeling from the death of your father, who you barely knew, and when you don’t have your shit together in any way, shape, or form in any case. There’s value in that approach, but there isn’t a lot of drama, in the most traditional sense; this is one of those movies that doesn’t so much end as just stop, with a banal final shot that conveys little more than “so that happened.” While it was actually happening, though, I was totally involved, and that counts for a great deal.

Finally, by way of farewell, let me add my voice to the chorus of hosannahs for Don Hertzfeldt's prize-winning short “World Of Tomorrow.” Had I never seen Hertzfeldt’s work before, odds are my brain would have been totally fried. Unfortunately (if that’s the right word), his 2006 short “Everything Will Be OK,” which makes up the first part of the compilation feature It’s Such A Beautiful Day, is one of my 10 favorite films of all time—I would have included it on my 2012 Sight & Sound poll ballot, had I seen it in time—which means that everything else he does now gets judged by an impossible standard. So, no, “World Of Tomorrow” isn’t on that insanely rarefied level, making it a “disappointment.” But, yes, it’s utterly fantastic, in terms of both of its pseudo-primitive visual style (stick figures in abstract sci-fi landscapes) and its poignant juxtaposition of innocence and sad experience. So long as Sundance continues to recognize and make room for singular, uncompromising visions like Hertzfeldt’s (and Maddin’s), it’ll be worth the trek and the cold and the long lines and the laughably rinky-dink venues and the endless hype. Thanks for spending the past week with Noel and myself as we did our best to share the experience.

My favorites (not including “World Of Tomorrow”; I have trouble ranking shorts against features):

Keep an eye out for these and many others (Tangerine, The Diary Of A Teenage Girl, Dope, Finders Keepers, The Wolfpack, Misssissippi Grind, Experimenter, Results, etc.) as they arrive in theaters over the next year or so. And you won't have to wait long for The Dissolve’s next festival report, as Scott Tobias will be attending True/False in just a few weeks. Don't/Miss.