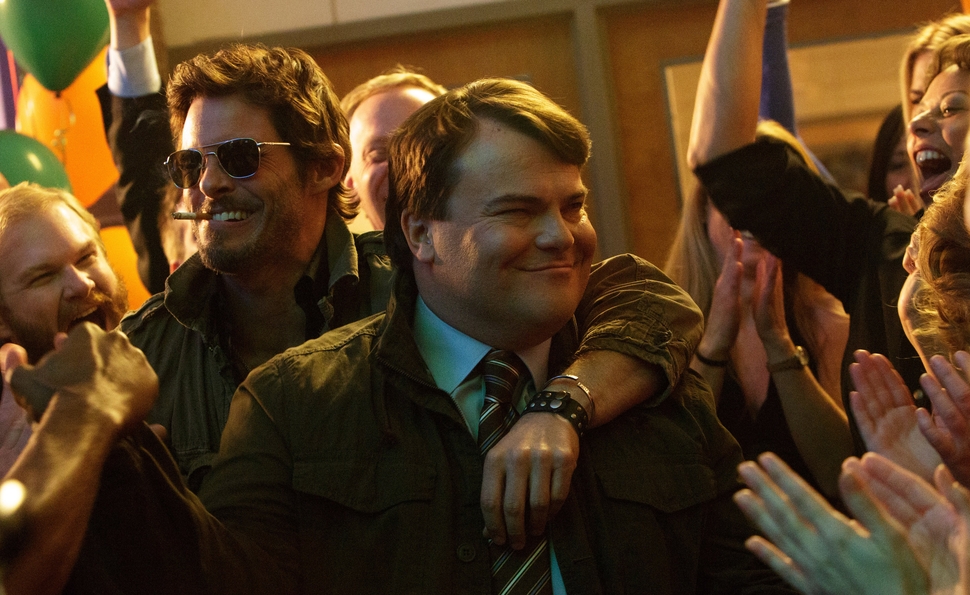 One of my idiosyncrasies as a moviegoer is the desire to know as little as possible about a movie before seeing it (provided I know that I want to see it). When trailers drop online for films that I’m eagerly anticipating, I don’t click; at festivals, I virtually never look at the catalogue’s plot synopsis, or even at the cast list. Surprise me! Consequently, I’ve seen several comedies at Sundance this year without knowing in advance that they’re comedies, tumbling to that conclusion only after the first several consecutive laughs. Then, after getting into the swing of things, I twice found myself blindsided when the film took a sudden swerve from frivolous to genuinely provocative—in one case, a swerve so hard that comedy no longer seemed like quite the right genre, even as the jokes continued. What’s viewed as an envelope-pusher changes over time, and it’s possible that these films will look quaint in years in come. Right now, though, they’re gratifyingly bold and fearless. If their accomplishment can’t match their ambition, at least someone tried.

For a long time, The Overnight, the second feature directed by Patrick Brice (whose debut, Creep, starred himself and Mark Duplass), looks like a pretty basic exercise in gradually escalating discomfort. Watching their young son play in the park one day, new L.A. residents Alex (Adam Scott) and Emily (Taylor Schilling) are befriended by Kurt (Jason Schwartzman), who invites them over to his house for dinner and a playdate with his own kid. Kurt seems a bit off from the get-go, however, and while his French-born wife, Charlotte (Judith Godrèche), is friendly and charming, it's not terribly hard to guess what the hosts’ ulterior motive for this dinner party might be, especially once Charlotte casually puts her hand on Alex’s knee and Kurt suggests that they all go skinny-dipping in the backyard pool.

Brice, who also wrote the screenplay, has chosen his four lead actors perfectly: Schwartzman and Godrèche walk a tightrope between fun-loving and creepy, while Scott and Schilling convey the anxiety of a couple who don’t want to appear prudish and aren’t sure exactly where their boundaries lie. As hilarious as The Overnight often is, though, it takes its characters’ desires and insecurities very seriously. Alex, for example, has an unusually small penis (deftly foreshadowed in the film’s opening sex scene, which sees Alex and Emily stop mid-fuck in order to bring themselves off by hand), and while this inspires an uproarious scene involving nude dancing with prosthetic johnsons—tiny for Scott, gargantuan for Schwartzman—it also inspires some remarkably earnest soul-searching. The film’s conclusion, too, hits tender, melancholy, and adventurous notes before finally going for the inevitable punchline (also deftly foreshadowed). Brice creates funny caricatures, then transforms them into real people. It’s bracing.

Even more bracing, and considerably more problematic, is The D Train, in which Jack Black plays a friendless (but married) schlemiel named Dan, whose great passion is running the committee in charge of his high school’s 20-year reunion. Desperate to boost the event’s status, he flies to L.A.—using a fake business deal as an excuse—to persuade his alma mater’s former Big Man On Campus, Oliver Lawless (James Marsden, never better), to attend. Having seen Oliver in a commercial, Dan assumes he’s a huge success; it’s abundantly clear, however, that Oliver is barely scraping by as an actor, and The D Train first turns poignant when he tries to live up to Dan’s hero worship by faking friendship with a coldly polite Dermot Mulroney (priceless cameo as himself) at a club. Then, a farcical plot seems to kick in, as Oliver volunteers to play the C.E.O. who Dan had pretended was interested in a contract, for the benefit of Dan’s boss (Jeffrey Tambor), who unexpectedly insisted on coming along for the big pitch meeting.

That could easily have been the whole movie, but it isn’t—not even close. IFC has only just picked up The D Train as I write this, and it’s not yet clear whether the marketing campaign will allude to the unexpected turn of events that fuels the film’s disorienting gearshift. For now, I’ll remain cryptic, and just say that the relationship between Dan and Oliver, as written by directors Jarrad Paul and Andrew Mogel, probably could not have attracted stars as big as Black and Marsden even as recently as five or six years ago—not without extensive image-protecting revisions, anyway. Dan, in particular, goes on an emotional rollercoaster—encompassing panic, confusion, overcompensation, jealousy, resentment, projection, and neediness—that Black, who’s prone to mugging even when aiming for subtlety, can’t make wholly credible. The movie’s tone veers wildly from scene to scene, sometimes in ways that temporarily make it seem insensitive or even downright offensive. Like The Overnight, though, The D Train ultimately respects what the people it’s invented are going through, and acknowledges that some aspects aren't particularly funny. It’s a mess, but that’s largely because what it’s attempting is inherently messy, at least for the time being.

Sound too touchy-feely? Looking for a comedy that’s just energetic and goofy and flat-out fun? Keep an eye out for Dope, which manages to put a lighthearted spin on the adventures of Inglewood kids who are trying to avoid being shot and killed by drug dealers. A hip-hop update of Risky Business for the era of Bitcoin and viral memes, Rick Famuyiwa’s fourth feature (after The Wood, Brown Sugar, and Our Family Wedding) focuses on Malcolm (Shameik Moore), a high-school geek who's intent on getting into Harvard. His attempt to broker a liaison between a local dealer (A$AP Rocky) and a studious neighborhood girl (Zoë Kravitz) results in a series of misadventures that find him and his dorky friends in possession of a large quantity of MDMA and pursued by gun-wielding gangstas, forcing them to improvise a solution using their expertise with the Internet. Dope is so current in many respects that it risks looking dated down the road—people won’t be posting image macros featuring text in the Impact font forever—but Famuyiwa craftily deflects the issue by making his characters obsessed with the ‘90s, to the point where Malcolm even sports a hi-top fade and dresses like he’s on In Living Color. The film does have a message, involving the desire not to be categorized and dismissed due to one's background or interests, but nothing so breezy could possibly come off as preachy. Even when folks are being shot, there’s nothing to inspire the TV-news lament that turns into a social-media catchphrase: “How’m I spose to eat my pound cake?!”

For absolutely pure comedy, there’s always Noah Baumbach’s Mistress America, which he co-wrote with star Greta Gerwig. (I believe this film was shot immediately following Frances Ha, then put aside while Baumbach made While We’re Young, which premiered last fall and will open this spring.) Gerwig plays Brooke, a self-absorbed New York go-getter who becomes a mentor and literary inspiration for college freshman Tracy (Lola Kirke, who looks exactly like her older sister, Jemima, but has no English accent), who’s about to become her half-sister. While Gerwig and Baumbach have written Brooke plenty of zingy one-liners, however, there’s a strident, labored quality to the film’s early scenes—a sense that everyone’s trying way too hard. Thankfully, that ceases to be a problem when Brooke, Tracy, and a couple of other kids head to Connecticut to persuade a rich ex-boyfriend of Brooke’s to invest in a restaurant she wants to open. Once the dramatis personae are gathered in the same house, Mistress America goes full-bore screwball, and the overexertion that had previously felt slightly off suddenly works in the movie's favor. Everyone talks a mile a minute, usually on top of one another, and minor characters (including a pregnant woman whose only function is to contribute yet another voice to the cacophony) are given the chance to make a major impression. This sequence runs half an hour or longer, and is so expertly choreographed and relentlessly manic that it makes the rest of the movie seem tepid by comparison. Here, too, I was taken by surprise, suddenly realizing over halfway through, “Oh, it’s a bedroom farce with no bedroom.”

Also seen: A couple of the non-comedies I’ve watched over the past two days deserve more space than I could give them in today's report, so I'm gonna save them for the next one. There’s less to say about Mississippi Grind, the latest film by the team of Anna Boden and Ryan Fleck (Half Nelson, Sugar), which stars Ryan Reynolds and Ben Mendelsohn as a couple of gamblers on a road trip. It's a thoroughly enjoyable portrait of the fluctuating friendship between two men with only recklessness in common, featuring the same authentic, lived-in textures that have distinguished Boden and Fleck's previous work. Unfortunately, the film’s grittiness and weary pathos ultimately gives way to a disappointingly pat finale, and while some effort is made to undermine/qualify the implausibly happy ending, it just ain’t enough. Both actors are superb, though—Mendelsohn has the showier role and is getting most of the attention, but Reynolds, as the “stable” one, demonstrates again that he’s much more than a ridiculously pretty face.