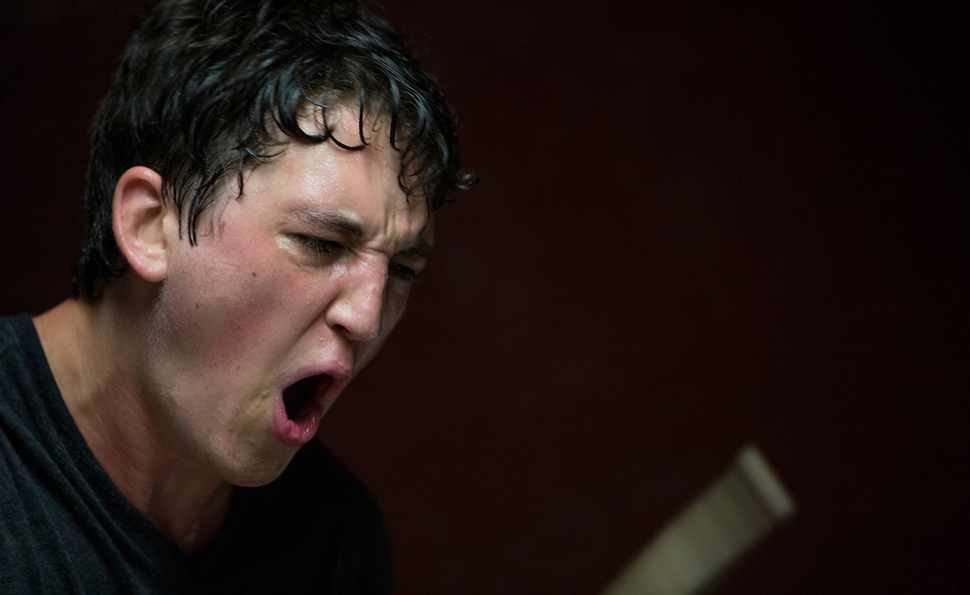 Day 2: The young and the restless

It takes an awful lot of drive to get an independent film into Sundance, especially for young filmmakers. So it shouldn’t be surprising that many films at Sundance dwell on similarly singleminded figures. For me, that was the overwhelming theme of the first few days of this year’s Sundance: I saw five fine, sometimes transcendent movies that were all concerned on some level with the dark side of ambition and obsession. It’s woven deep into the fabric of American society that there is no aspiration more noble than pursuing dreams at all costs, but these entertaining films chronicle how pursuing dreams to the exception of all else can render fundamentally good people callous, cruel, and even psychotic.

It isn’t just egos and feelings that get hurt when driven people go too far: many of the obsessives in the five films I saw today and last night suffered horrible injuries from their passionate pursuits as well: Fela Kuti getting tortured by the police for speaking truth to power in Alex Gibney’s powerful (albeit conventional) documentary Finding Fela!; the luckless protagonist of the harrowing revenge drama Blue Ruin, wandering around with an arrow stuck in his leg; the driven musician of Whiplash drumming so hard that bleeding hands and bloody drum sets become his trademark; the cursed protagonist of The Double, enduring a gauntlet of humiliation, then incurring some profound physical damage of his own. In these movies, dreams can get people hurt, even killed.

Whiplash has quickly emerged as one of the most buzzed-about titles at this year’s Sundance. It began life as a Sundance short written and directed by 28-year-old Damien Chazelle. He’s only two years older than his lead, Miles Teller, who looks even younger as 19-year-old Andrew Nieman, a jazz zealot whose life revolves around his goal of becoming one of the greatest drummers of all time. Andrew doesn’t just want to be good; he nakedly grasps for all-time greatness, hoping to be whispered of in the same breath as his idol, Buddy Rich. He begins the film as a sweet, shy kid too nervous to ask out the cute concession-stand girl at the theater where he watches Rififi with his loving, concerned dad (Paul Reiser, in a nicely understated, warm performance), and he’s intimidated by, and out of step with, the competition and unfriendliness he encounters at the world-class jazz college he’s attending.

Andrew’s quiet determination attracts the attention of Terence Fletcher, the school’s most feared and revered teacher. J.K. Simmons plays him as a rampaging force of nature, a cross between R. Lee Ermey in Full Metal Jacket, an insult comic, and the world’s most terrifying life coach. Whiplash initially appears to be an unusually intense take on the inspirational-teacher movie, albeit one where the teacher in question might inspire students to drop out, kill themselves, or give up even listening to music entirely, rather than inspiring them to reach for greatness. Here, Simmons is a poet of profanity delivering hilarious but vicious ego-destroying rants with their own percussive quality. Teller matches Simmons’ blistering intensity, and what begins as an extreme mismatch—the scared kid vs. the scariest teacher in the world—eventually develops into a riveting war of wills that closes with a thundering climax, which goes a long way toward justifying the film’s enormous, richly merited buzz.

When it comes to rhythm, Andrew is a neophyte compared to Fela Kuti and his legendary and influential drummer, Tony Allen. In Finding Fela!, Alex Gibney—the hardest-working man in the documentary business—offers a dual documentary portrait of controversial Nigerian icon Kuti and Fela!, a Broadway musical based on his life and career. Finding Fela! begins unpromisingly, as a rigidly conventional talking-heads doc featuring comments by the ubiquitous ?uestlove (whose website, Okayplayer, helped produce the film) and other assorted experts with a distinct tendency toward hagiography. In the early going, the film seems less interested in documenting Kuti’s life than in canonizing him as the holiest and bravest of rebels.

The film eventually settles into a much richer, more complex and contradictory portrait of a man whose greatness was invariably wrapped up in his larger-than-life vices. Fela Kuti worshipped his mother, and never seems to have gotten over her death. He also ruled over his own harem, at one time marrying 27 women simultaneously, and making egregiously sexist statements in the press. And the same deeply spiritual revolutionary who refused to leave Nigeria for the safety and comfort of Paris or New York ended up getting rooked by charlatans like a shadowy spiritual advisor known only as Professor Hindu, and continued to have unprotected sex even after being diagnosed with HIV.

Yet despite his bad habits, misogyny, and questionable beliefs, Kuti emerges as an inspirational figure, a giant who genuinely did put his life on the line for what he believed in, and galvanized a people in the process. Kuti’s life was defined by triumph and tragedy, and Finding Fela! has an enormous asset in footage of Kuti himself, a gorgeous man with a charisma and presence on par with fellow legends like James Brown, Bob Marley, and Elvis Presley. The wall-to-wall music in the film is amazing and revelatory, especially for those without much knowledge of the Afrobeat genre that Kuti more or less invented and dominated. Gibney remains a good documentarian blessed by great subjects, and in exposing American audiences to the music, mystery, madness, and magic of Kuti’s life and career, Gibney and his collaborators perform a valuable public service that has a funky beat and you can dance to.

The tormented obsessives of the festival favorite Blue Ruin use knives and guns as their instruments of choice. The film follows the path of Dwight (Macon Blair), a bearded, homeless loner and Rasputin lookalike with the haunted aura and thousand-yard stare of a man scarred by irreversible trauma. The film generates suspense by keeping the exact nature of Dwight’s trauma unclear throughout the first act. The film is characterized by ambiguity in its early going, and then a brutal visceral intensity that extends to extensive onscreen viscera. A chorus of “Oh fuck!” and “Oh shit!” greeted Blue Ruin’s many moments of stomach-churning carnage and gore, but the violence never feels gratuitous, and the film’s pummeling intensity is ever so slightly offset by extended moments of brutal slapstick involving the film’s slight, overwhelmed protagonist attempting the kind of macho-man survivalist tactics Rambo pulled off so effortlessly. As the filmmakers acknowledged in the post-screening Q&A, there’s nothing particularly novel about the film’s plot when reduced to its bare outlines. It’s a simple, primal, almost biblical exploration of blood feuds, family squabbles that ricochet through the generations, causing carnage and despair, and flat-out revenge. But there has never been a moody revenge movie quite like this before, and I don’t suspect there will be again. Blue Ruin reinvents the revenge saga in new, revelatory ways.

I was a big fan of Richard Ayoade’s directorial debut, Submarine, but nothing could have prepared me for his infinitely more ambitious follow-up, The Double. The film is based on a work by Dostoyevsky, but it seems equally inspired by the grimy industrial dystopia of Brazil and 1984. The film takes place in an unspecified time and place that combines the ugliest of the old with the ugliest of the new. It’s as if the filmmakers formed the worst aspect of every recent decade an amalgamation of everything that’s terrible about the world: the awfulest television of the 1970s, the prehistoric personal computers of the early 1980s, and grim post-war architecture where every building looks like it’s on the verge of turning feral and sentient, ready to mulch some poor moppet into gruel.

Jesse Eisenberg stars as a man so meek, he barely exists. He’s the subject of verbal abuse everywhere he goes, when people even bother to acknowledge him. Then one day at work, he encounters a new employee who looks exactly like him, but who overflows with the kind of bravado and glib self-assurance he so desperately lacks. Eisenberg is fantastic in a dual role; he’s equally compelling as a tragicomic everyman and a womanizing, manipulative, utterly amoral monster of the id. The Double feels like a waking dream throughout; the writer-director is drawing from the rich tradition of George Orwell, Terry Gilliam, and Dostoyevsky but this is nevertheless a startlingly original, accomplished vision from a filmmaker to watch.

Last but not least, I was thoroughly charmed by Obvious Child, a wonderful vehicle for Jenny Slate, a comedian and actor who was briefly a cast member on Saturday Night Live before taking on scene-stealing roles on Parks And Recreation and Kroll Show. In a part seemingly custom-made for her, Slate stars as Donna Stern, a Williamsburg stand-up comedian who gets dumped and loses her job in quick succession. Stern hooks up with a clean-cut business type named Max (Jake Lacey), gets knocked up during their one-night stand, and consequently must deal with both a pregnancy she didn’t want and isn’t prepared to handle, and the sweet but not entirely welcome interest of Max, who doesn’t know she’s pregnant. Obvious Child is equal parts tender and filthy, a scatological romp rich in fart jokes and genuine sweetness, both from the charmingly uninhibited Slate, and from a gallery of supportive friends and family played by the dependable likes of Richard Kind (as her father), Gaby Hoffman (as her best friend), and Gabe Liedman. Obvious Child is far and away the most winning abortion-themed rom-com ever made, and it should establish Slate as a bona fide star. I can’t wait to see where her career takes her.

Tomorrow: Noel Murray on Frank and God Save The Girl.