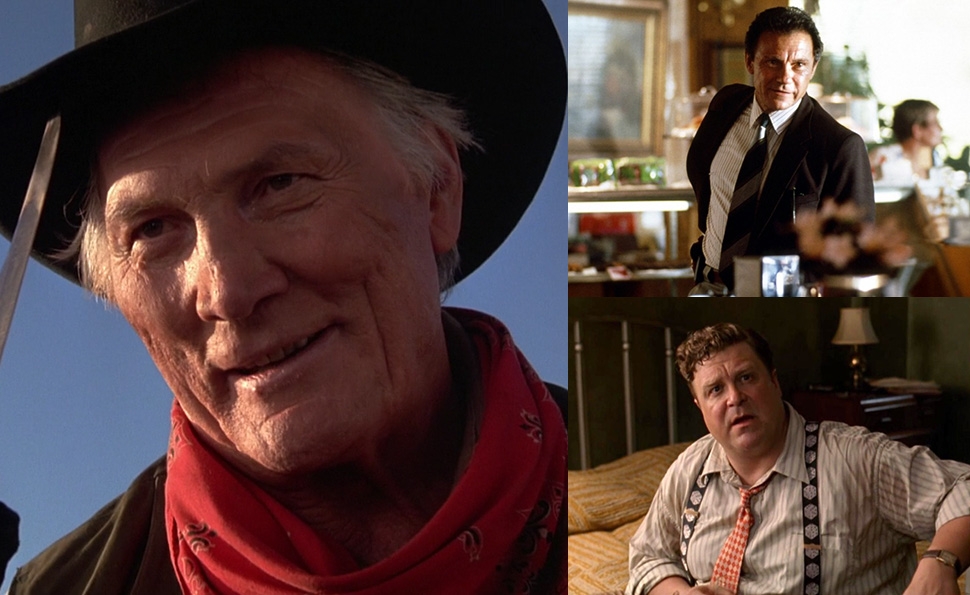 Arguably, Jack Palance’s acceptance speech for his Best Supporting Actor trophy, during which he performed several one-handed pushups, is better remembered than his actual performance in City Slickers, which doesn’t really demand a whole lot from him. Curly, the trail boss leading Billy Crystal and company on a midlife-crisis cattle drive, was surely envisioned by screenwriters Lowell Ganz and Babaloo Mandel as a Clint Eastwood type, even if they knew that getting Eastwood to do it would be impossible. Palance makes a sturdy substitute, toting along decades of his own tough-guy baggage dating all the way back to Shane. But the part is fairly limited, trading on the comic juxtaposition between this rugged, taciturn “saddlebag with eyes” and the urban wimps he’s transporting. Mostly, Palance makes a marvelous human wall for Billy Crystal to bounce self-deprecating one-liners off of, in much the same way Will Sampson acts as a sounding board for Jack Nicholson’s sarcasm in One Flew Over The Cuckoo’s Nest, even though the tone is decidedly different. It had been nearly 40 years since Palance’s last nomination, however, when he was up for the same award for Shane. And while Academy voters don’t always go for the sentimental choice—just last year, octogenarian Emmanuelle Riva was passed over in favor of relative newcomer Jennifer Lawrence—that was surely the case here. 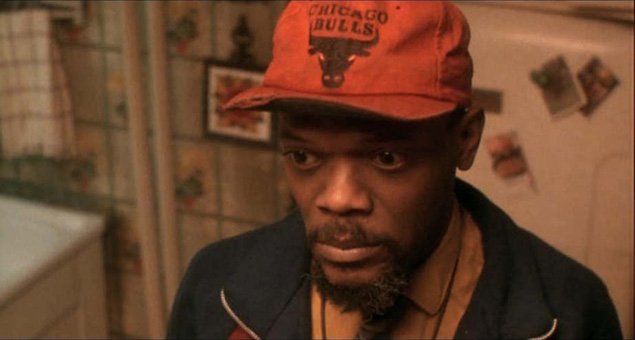 The Cannes Film Festival gives prizes for Best Actor and Best Actress each year, but that’s it—no supporting performances are recognized. So I remember my awe when I first heard that the 1991 Cannes jury had been so blown away by Jackson’s work as Gator, Wesley Snipes’ crackhead brother in Jungle Fever, that they’d insisted on bestowing an award that technically didn’t exist. As it turns out, that seems to be a half-truth: According to the official Cannes website, Jackson’s prize was awarded not by the jury, but by FIPRESCI, an unaffiliated international critics’ organization. Doesn’t really matter, though—point is, it’s the sort of electrifying, breakout turn that simply can’t be ignored… except by the Academy, which didn’t even nominate Jackson.

It could be argued that playing a live-wire drug addict is relatively “easy,” in the sense that it’s inherently showy enough to grab attention. (See also: drag, disabled characters, etc.) But Jackson’s take on the prodigal son who never finds his way home—except to demand money from his poor mom—is ferocious in ways that are uniquely his. Gator is fearsomely unapologetic about his habit: He wants to get high, and he’s prepared to do whatever it takes to accomplish that. At one point, he blackmails Snipes into giving him money by noting that he’ll otherwise be forced to knock some elderly person on the head; Jackson does an amazing job of selling that this isn’t a bluff, sounding simultaneously regretful and determined.

But it’s the dancing that truly makes Gator come alive. Whenever he’s wheedling someone for cash, he starts busting some moves, in a way that’s presumably meant to be ingratiating, but actually makes him look like he’s trying to juke right out of his skin. And in his final confrontation with his father, his act of defiance takes the form of a silent, murderous hate-shimmy that conveys far more contempt than words ever could. It’s chilling to behold. One year earlier, Jackson was still playing roles like “Taxi Dispatcher” in films like Betsy’s Wedding; Gator changed that, and it’s no surprise it was the New York critics who acknowledged it. 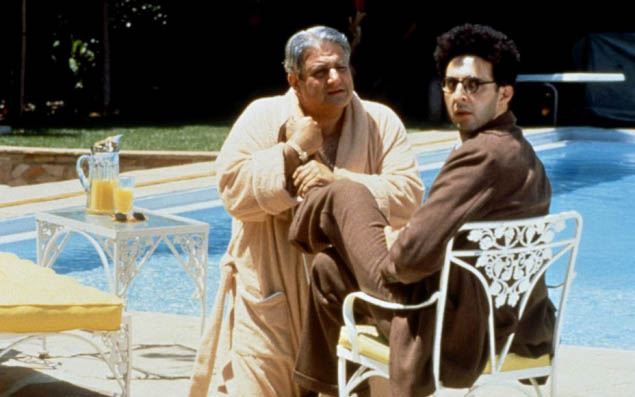 By the same token, it’s no surprise L.A. critics went with Lerner’s hilarious satirical portrait of old-time studio bosses like Harry Cohn and Louis B. Mayer in Barton Fink. (Lerner also earned an Oscar nomination for his work.) Lerner had been working steadily but with little fanfare for two decades when the Coen brothers handed him this incredibly juicy role, and he went to town with it, barking torrents of extravagant praise at John Turturro’s bewildered New York playwright, coupled with veiled threats and sprinkled with random digressions. The lines themselves are plenty funny, but Lerner’s breathless, rat-a-tat delivery carves out additional comic terrain, eliding the normal pauses—if only for breath!—that separate one thought from another, so poor Barton never has a chance to get his bearings. (Tony Shalhoub’s turn as producer Ben Geisler is similarly eccentric and equally riotous, but he isn’t quite as loud as Lerner, and the character isn’t inspired by anybody in particular, so it didn’t get the same attention.) Like Palance’s role, this one is one-note, but it’s a considerably more creative note, finding tyranny in obsequiousness. And we only care about one thing: Can he make us laugh? Can he embody a caricature that transcends the stereotype of the studio boss? Can he give us that Barton Fink feeling? Is that more than one thing? Okay!

Critics’ organizations sometimes do this—cite the actor’s entire body of work for the year, or at least a good hunk of it. Usually, one performance is the “real” winner, and while Keitel does serviceable work as a dogged cop in both Mortal Thoughts and Thelma & Louise—I especially like seeing him radiate decency in the latter, as a change of pace—it’s unlikely that he’d have received any awards for either one by itself. Playing real-life gangster Mickey Cohen in one of the year’s most celebrated films, on the other hand, is a quick ticket to glory. Thankfully, Keitel doesn’t grotesquely modify his face to resemble Cohen’s squashed mug, as Sean Penn did in this year’s Gangster Squad; he settles for shaving his hairline way back, and otherwise gives a fairly standard-issue angry-thug performance, shaded by the unexpected delicacy that often creeps into his bad guys. It’s solid work, but nothing more, and it was eclipsed just a year later by the raw anguish of his Bad Lieutenant and the misguided loyalty of Mr. White in Reservoir Dogs. I think of this as a coattail award: Bugsy was (for some reason) one of 1991’s most wildly acclaimed pictures, and its fans got a little carried away. Ben Kingsley’s Meyer Lansky is much richer and more detailed (both were nominated for Oscars), and a couple of years later, the part would make a fascinating double-bill with Kingsley’s right-hand man in Schindler’s List. But the NSFC apparently felt it was Keitel’s time.

Right movie, wrong actor, AMPAS and LAFCA. As Barton’s next-door neighbor at the Hotel Earle, John Goodman is asked to do the near-impossible: embody the so-called “common man,” a figure of ostensible reverence for the writer (who instead treats him with oblivious condescension). Radiating bonhomie almost from the moment he appears, Goodman comes across like the entire world’s best friend; his ability to convey sincere, unguarded interest and empathy without a hint of self-absorption is uncanny.

Those who’ve seen the movie know that a major transformation takes place by the final reel, but there’s nothing cheaply ironic or shallowly schizophrenic about the character as performed. Goodman somehow manages to make both faces—smiling Charlie Meadows and bellowing Madman Mundt—seem not just compatible, but damn near identical, minute variations on the same open-hearted impulse. He imbues the man with the best kind of mystery, where it’s tough to articulate what makes him tick, yet it’s easy to understand, on an emotional level, everything he says and does. Among Goodman’s most powerful line readings: the way his voice drops to a bone-deep, sorrowful whisper, and the way his enormous face crumples, as he says, toward the end of his final scene: “And you come into my home, and you complain that I’m making too much noise.” There’s so much pain embedded in those words—as spoken, not so much as written—that it boggles the mind that this titanic feat of emotional engineering was completely ignored by every award-giving body known to man. Especially since Goodman was playing a guy who’s continually, rudely ignored.