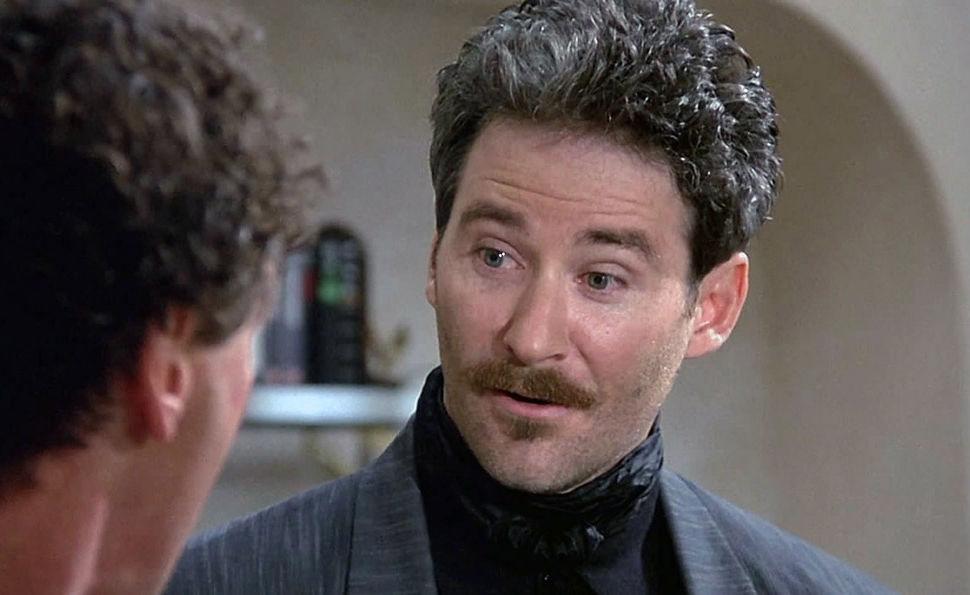 It’s been a quarter-century now, and I still can’t quite believe this happened. Kevin Kline’s deranged performance as the armpit-sniffing, Italian-spouting, pseudo-intellectual Otto in A Fish Called Wanda seemed far too uniquely brilliant for Oscar recognition; it was a shock when he was nominated, and I vividly remember the whoop of joy I let out when he actually, improbably won. What made it even more remarkable at the time was that Kline was known almost exclusively as a dramatic actor, in films like Sophie’s Choice, The Big Chill, and Cry Freedom—only people who’d seen him onstage or in The Pirates Of Penzance could have anticipated such a broadly comic turn. Even so, Otto is just such a sui generis creation: an absurdist embodiment of American idiocy as seen through English eyes, vulgar yet weirdly graceful, prone to venting his frustration (“I’m disaPPOINTED!!!”) with leaps and kicks that would look at home in a big Broadway dance number. He’s a meathead’s ballet dancer. And while the character is meant to be dimwitted, and frequently is, Kline’s natural intelligence bleeds through in ways that somehow enhance rather than spoil the joke. This performance is as close to a live-action Daffy Duck as we’ve ever seen: It’s fitting that Otto meets his end by getting steamrolled flat as if he were a cartoon character, and doubly fitting that he survives for one final gag. Even the hidebound Academy members were unable to deny such flagrant genius. 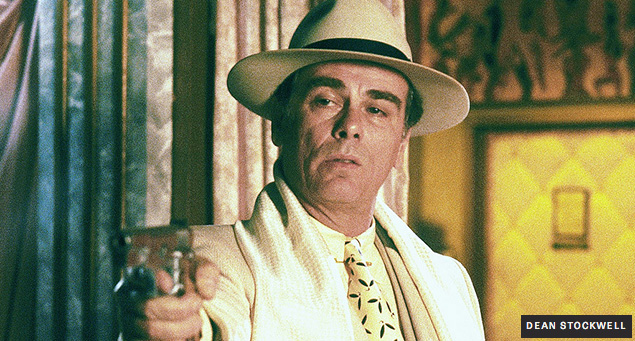 • New York Film Critics Circle: Dean Stockwell, Married To The Mob and Tucker: The Man And His Dream

First of all, ignore the citation for Tucker, in which Dean Stockwell makes a brief, unmemorable cameo as Howard Hughes. He’s gorgeously lit, and accompanied by an eerie soundtrack cue, but the role doesn’t give him anything much to do apart from wear a mustache and politely decline to shake people’s hands. This award (and the one below) were for Married To The Mob—and it could credibly be argued that they also constituted belated recognition for Stockwell’s career-reviving performance in Blue Velvet two years earlier. As mob boss Tony “The Tiger” Russo, who’s pursuing the widow of a man he killed (Michelle Pfeiffer), Stockwell does a solidly goofy wise-guy routine, working an Italian accent and radiating casual menace… though he’s often more of a straight man for Pfeiffer and especially Mercedes Ruehl, playing his jealous wife. As an exercise, I tried watching several of his scenes and mentally replacing Stockwell with Tony Soprano (the fact that they’re both named Tony made it easier), imagining how James Gandolfini would have delivered the same lines. The substitution worked surprisingly well, and diminished Stockwell’s performance a little in my eyes. He’s having a good time, but he remains very much on the character’s surface; it’s unclear to me why he was singled out rather than, say, Matthew Modine. Which is why I really feel like Stockwell’s unforgettable lip-sync rendition of Roy Orbison’s “In Dreams” played a major role in these hosannahs. His role in Blue Velvet was too tiny to merit awards, but that was what got people’s attention; combine that with his dues-paying career as a child actor (dating back to 1945), and he probably seemed very much due. 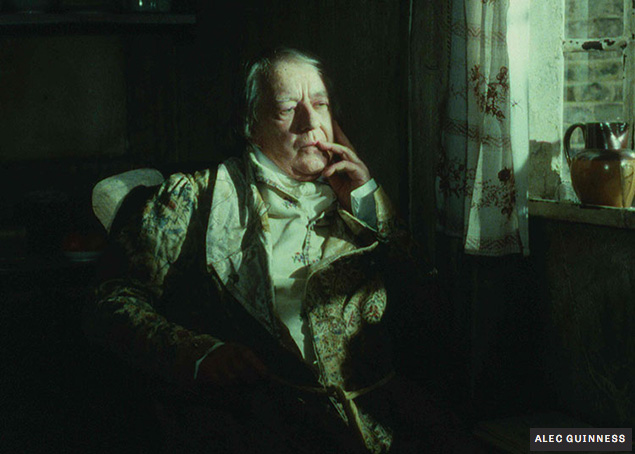 Until Sátántangó came along a decade or so later, Little Dorrit was the longest movie I’d ever seen: a six-hour adaptation of Charles Dickens’ novel, shown in theaters as two separate three-hour films. Guinness plays William Dorrit, the family patriarch, who spends much of the movie in debtor’s prison, like Dickens’ own father. In general, Guinness + Dickens seems like a slam dunk, and the actor sinks cozily into Mr. Dorrit’s dignified destitution; he also gets a superlative deathbed scene, which he milks to the fullest without seeming emotionally grabby, as so many others might in that circumstance. Plus, six hours gives an actor a lot of time to build a character, even in a supporting role. Many of the film’s scenes play out at a leisurely pace that would be impossible in a two-hour movie, allowing Christine Edzard, who adapted and directed the film, to include as much of Dickens’ dialogue as possible. Today, this would assuredly be a TV miniseries—I’m not such how it escaped that fate even at the time—and Guinness (if he hadn’t died 13 years ago) would be cleaning up at the Emmys. But it’s the kind of technically impeccable, gorgeously assured performance that works like gangbusters in any medium, and while I prefer Kline’s riskier gambit, there’s a sense in which comparing the two (Guinness was likewise Oscar-nominated) is fundamentally absurd. Though I submit that Kline could have played William Dorrit, whereas Guinness… Actually, thinking back on the young Guinness in some of the old Ealing comedies, scratch that thought. They’re both terrific.

• National Society of Film Critics: Dean Stockwell, Married To The Mob and Tucker: The Man And His Dream

It was definitely Stockwell’s year as far as the critics were concerned. The other two Oscar nominees that year were Martin Landau, also for Tucker (in a much bigger role), and River Phoenix for Running On Empty. It’s a strange juxtaposition, in a way—at the time, it seemed likely to be Landau’s final shot at award recognition, whereas anyone would naturally assume it was the first of many nominations for Phoenix, who was shaping up to be the actor of his generation. Within six years, Landau had won the Oscar for Ed Wood, and Phoenix was gone. Landau isn’t as sensational in Tucker as he is playing Bela Lugosi in Ed Wood, but he makes a fine voice of reason opposite Jeff Bridges’ cheerful profligacy in the title role. And Phoenix is just heartbreaking. Running On Empty is about a family constantly on the run, because the parents (Judd Hirsch and Christine Lahti) committed an act of terrorism years earlier; Phoenix plays their only child, who wants nothing more than to live an ordinary life that doesn’t require uprooting himself and taking on a new identity every year or so. River had the same emotional transparency that his brother Joaquin Phoenix does, but minus the tic-ridden strangeness (though who knows what might have happened over time). As in My Own Private Idaho, which River made a few years later, he has times in Running On Empty when he seems transparent, because his defenses are so shallow. He appeared in only 13 films before he died (not counting the unfinished-until-recently Dark Blood), and his loss remains incalculable. Watching him play a character whose promise is in danger of being snuffed out by cruel circumstance can be rough going for those who still miss him. 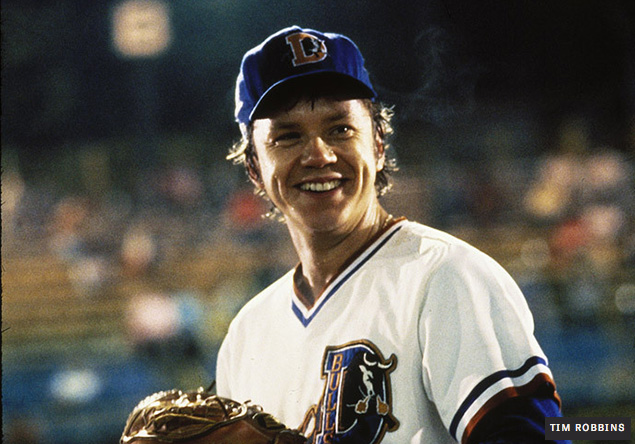 I had to triple-check to make sure nobody gave Robbins anything for playing Ebby Calvin “Nuke” Laloosh—his breakout role. Nada. Zippo. Insane. What a fantastic year this was for indelible comic performances, no? (I could just as easily cite Trey Wilson for this same film.) In fact, he and Kline represent diametrically opposed approaches to playing an idiotic character, demonstrating that both of them can be hilarious and unforgettable. Robbins opts to show the gears slowly grinding; people often say admiringly of actors that it’s possible to see them thinking, but it’s arguably harder to depict a character who’s trying to think and failing miserably. At the same time, Nuke’s goofball enthusiasm is ridiculously endearing, and his chemistry with Susan Sarandon is so strong, it’s no surprise they wound up together for more than 20 years (even though Kevin Costner gets her in the movie). The nature of the role dictates that Robbins doesn’t get many good lines, so the performance resides almost entirely in his rubbery face and jangling limbs; he was also young and hungry enough to be willing to play the butt of most of the jokes, even standing on the mound in a dream sequence wearing only a garter belt. Robbins eventually won an Oscar for his ham-handed portrait of a damaged soul in Mystic River, while being ignored for his sublime buffoonery; that’s emblematic of how actors get honored for the wrong performance. There’s no doubt in my mind about which one people will still be talking about in another 25 years.