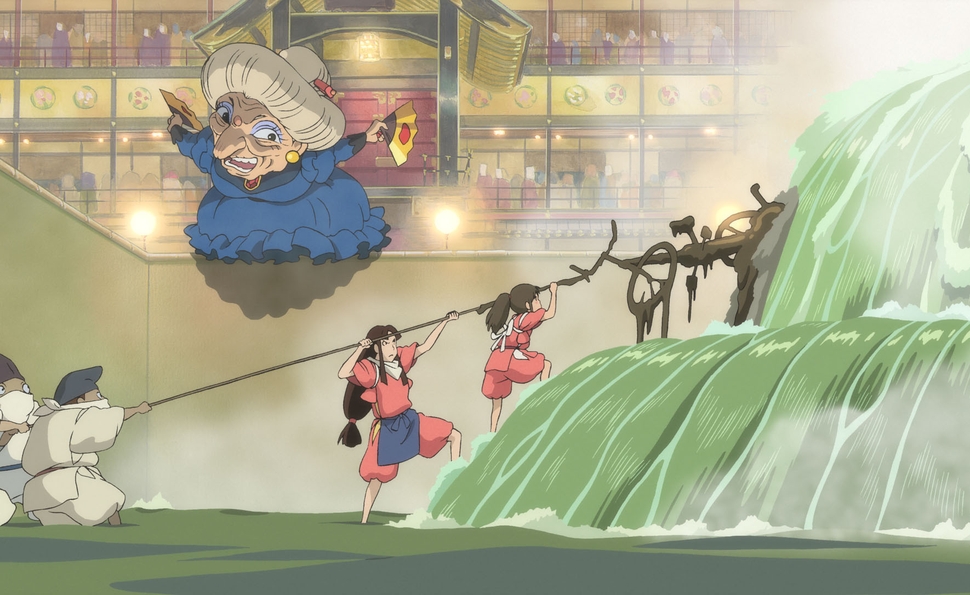 The gross fluids and clean fluidity of Spirited Away

Longtime fans of Hayao Miyazaki’s animation quickly learn to identify a few commonalities. Some are basic themes, common to kids’ films from many cultures: Courage, loyalty, and love eventually beat out darkness and selfishness. Some are related to Miyazaki’s personal obsessions with the thrill of flight and the sorrow of seeing the natural world overtaken by human civilization. Some are cultural: Miyazaki’s young heroes and heroines all embody the celebrated Japanese ideal of genki, a mixture of driving energy and indomitable good cheer. Some are just visual: Miyazaki films are dynamic, usually full of vigorously windswept clouds, waves, trees, or grass. No matter where a given Miyazaki movie is primarily set—in a castle in the sky or in a poisoned postapocalyptic future full of glow-eyed monsters—he loves to return to rolling meadows under bright blue skies.

But one of the most fundamental ideas common to Miyazaki’s films is a sense that nothing is fixed; everything is fluid. On the large scale in The Castle Of Cagliostro or Nausicaä Of The Valley Of The Wind, kingdoms crumble and societies fall. On the small scale in The Secret World Of Arrietty (which Miyazaki scripted) or Kiki’s Delivery Service, characters are pushed out of comfortable homes to go make new lives elsewhere in the world. Sometimes the fluidity is conceptual: The protagonist of Porco Rosso changes from a man to a pig and back, depending on who’s looking and when, and the flying machines of The Wind Rises move in and out of their creator’s dreams, changing between literal and conceptual, and between idealized, pure engineering problems and lethally specific weapons of war. Sometimes it’s more literal, as in 2008’s Ponyo, where the titular character morphs between girl and fish as the raging waters of her ocean home rise up to take over the world of the boy she adores.

But the idea of transformation and fluidity has never been more pronounced in Miyazaki’s work than in his 2001 Best Animated Picture-winner Spirited Away. Everything in the film changes. The movie kicks off with a young girl named Chihiro sulking as she changes homes. Her parents are excited about moving to a new town and a new house, but she’s alternately timid and petulant, defiant and cowering. Then the family accidentally crosses into the spirit world, and Chihiro’s parents are transformed into pigs. To save them, she has to take up work in a vast bathhouse for kami, the gods and spirits of Japanese folklore, under the rule of a greedy, huge-headed witch named Yubaba. Over the course of the story, Yubaba takes on and discards the shape of a bird-like creature at whim; her gigantic infant is forced into the form of a mouse, while her winged, human-faced familiar becomes a tiny mosquito-like bird. Chihiro is helped by a boy named Haku, a spirit whose other physical aspects are a white dragon and a torrential river. As Chihiro learns to be brave, she helps another river spirit which has become polluted and mutated into a soiled, stinking heap of sludge; she helps free it back to its original form. And she makes the mistake of opening the bathhouse doors to a No Face spirit, which begins as a shy, wordless, often-translucent shadow, becomes a rapacious, hyper-verbal spider-monster with an all-consuming mouth, and then fades back to a shadow again.

But most significantly among all these creatures warping their appearances and natures, Chihiro herself metamorphosizes. Once her parents and Haku need her, she learns to be brave, resilient, determined—and genki. The pouting, reluctant kid who cringes at each step of a steep staircase near the beginning of the film charges recklessly across a disintegrating pipe over an abyss once it’s necessary to save Haku’s life. By the end of the film, when Yubaba poses her a challenge—once again involving shapeshifting, as a group of bathhouse staffers disguise themselves as pigs to test Chihiro—she meets it fearlessly and confidently. She’s been through the wringer; she’s seen worse. 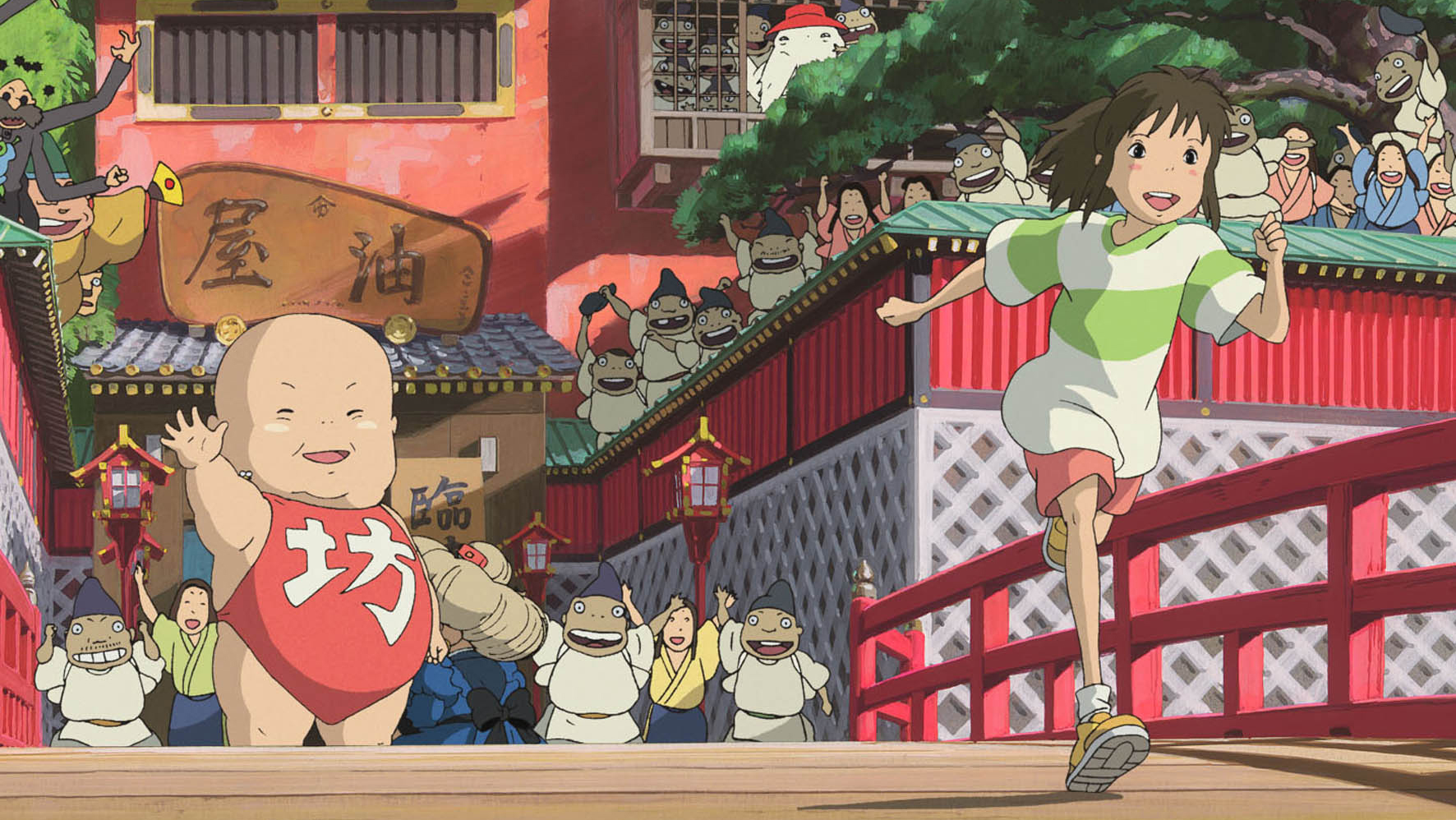 Spirited Away embodies the idea of fairy-tale logic: Its story doesn’t hold together in any sort of rational sense. It leaves a thousand questions behind: Why do Chihiro and her parents fall into the spirit world in the first place? Why do Chihiro’s legs bind her there, requiring a counterspell from Haku? Why does Yubaba have three green, grunting, bouncing severed heads hanging around in her apartments? Why did she take an oath to employ anyone who asked for a job? Why does she have a gigantic baby? Why does she want Zeniba’s seal? How does Chihiro know, at the end, that none of those ersatz pigs were her parents? None of it matters, because the film is a fairy tale: Miyazaki builds the story around story arclets that make deep, satisfying emotional sense. Yubaba has a giant baby because everyone has a grating weakness they find difficult to manage. Whatever Zeniba’s seal represents, Yubaba wants it because she’s greedy and grasping for power. Chihiro falls into the spirit world because she’s on a hero’s journey, and everything follows from there.

There’s a bit of Japanese slang that crops up a lot in pop-culture analysis, scholarly papers about societal differences, and the occasional look at myth and religion in Japanese life: Japanese people are “wet” (emotional, expressive, sensitive, and nuanced), while Westerners are “dry” (coldly logical and rational, prizing reason and gain over personal feeling and ties). By that metaphor, Spirited Away is an exceedingly wet movie. Chihiro leaps to action and conclusions based on her emotions. When Haku rescues her during her first terrified moments in the spirit world—which Miyazaki stretches out to an extreme that’s unusual for a children’s movie, emphasizing her terror, disbelief, and misery until it feels like a real child’s response, instead of a token emotional downturn—she forms a bond with him that allows her to endure anything. As it happens, they already have a previous bond: “I’ve known you since you were small,” he tells her when they meet, in a lovely bit of mystery only resolved late in the film. But it’s their present emotional connection that lets them both survive under Yubaba’s rule.

Spirited Away is wet in another sense: It’s utterly obsessed with fluid, beginning with the magically appearing sea that cuts Chihiro off from the mundane world, and ending with her quiet, almost unendurably sweet boat-and-foot-and-train journey across another inland sea to beg Yubaba’s twin sister Zeniba for Haku’s life. The rainstorm that produces the inland sea. The foul ocean of goo the river god leaves in its wake from the bathhouse exterior to the reception area to its tub. The herbal bath Chihiro uses to cleanse it. The blood pouring from Haku’s mouth as he chokes on a spell. The gigantic, outsized tears Chihiro cries as she processes her trauma. Haku himself, in her memories of falling into his river in early childhood. This is a film full of tears, and floods, and floods of tears, and for a culture that associates wetness with overwhelming, instinctual emotion, that’s a powerful focus. 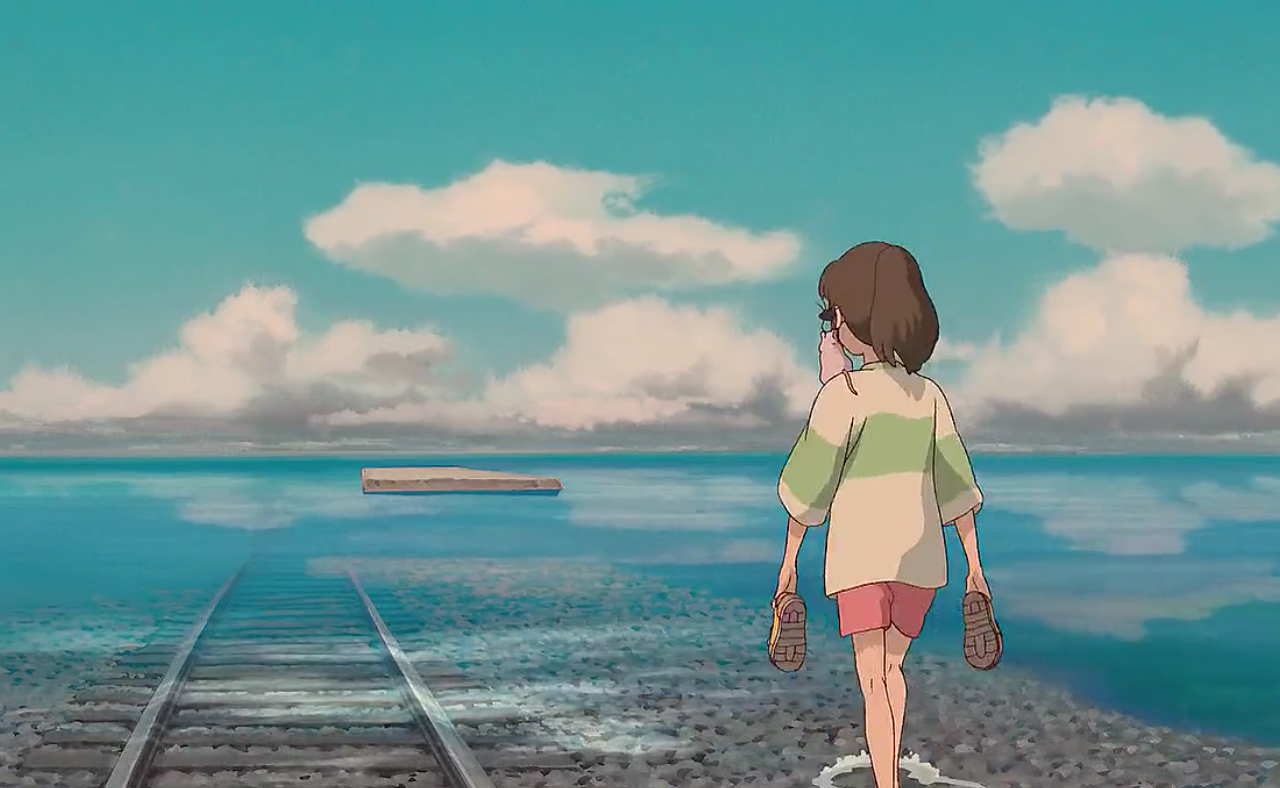 But then, Miyazaki makes passionate movies. He fills them with magical talking animals and morphing spirits and clanking mechanical castles, but at heart, his features are about emotion. Ponyo’s adoration of Sosuke in Ponyo, San’s rage in Princess Mononoke, Kiki’s magic-deflating depression and weariness in Kiki’s Delivery Service, Mei’s grief for her mother and Satsuki’s fear for Mei in My Neighbor Totoro: They all drive great changes in their lives, or even in their worlds. When Miyazaki movies do have villains, they often use them as an early threat, but let them fade away by the middle of the film, more defanged than defeated. (Often even the terrifying ones become low-key, admiring allies to the protagonists, like the air pirates in Castle In The Sky, or the Witch Of The Waste in Howl’s Moving Castle, or Baby and the Yubaba-bird and even No Face in Spirited Away.)

The real threat to the protagonists in Miyazaki films is almost always despair rather than a relentless evil. Yubaba is a terrifying, malicious monster when Chihiro first meets her, and she never fully comes around to the girl’s side: Even at the end, with her menace largely evaporated and the entire bathhouse on Chihiro’s side, she’s still authentically irked when the girl passes her pro forma test. But once Chihiro has thrust her arm into a dragon’s mouth to force-feed it medicine, and been cupped in the flowing hands of a river god, and faced down the most monstrous version of No Face with calm politesse, Yubaba has become just another bad emotion, one that can be stared down and shrugged off. To a genki, upbeat kid, anything is possible.

And as so often happens in fairy tales, the world opens up to a cheerful person with  a giving heart. When Chihiro walks into Kamaji’s boiler room and sees one of his black soot servants struggle and fall under the burden of the coal it’s hauling to the furnace, she acts instinctively to help it. That’s a turning point for the film: The moment where she earns the goodwill and respect of Kamaji and his magical servants, in ways that instantly pay off. Once her “wet” feelings of empathy have turned to positive use, she begins the process of converting the bathhouse staff to her side. Just as in any Western fairy tale where a wandering protagonist generously helps a beggar, an animal, or a stranger, kindness is more than a virtue: It’s a means to instant and lasting success. 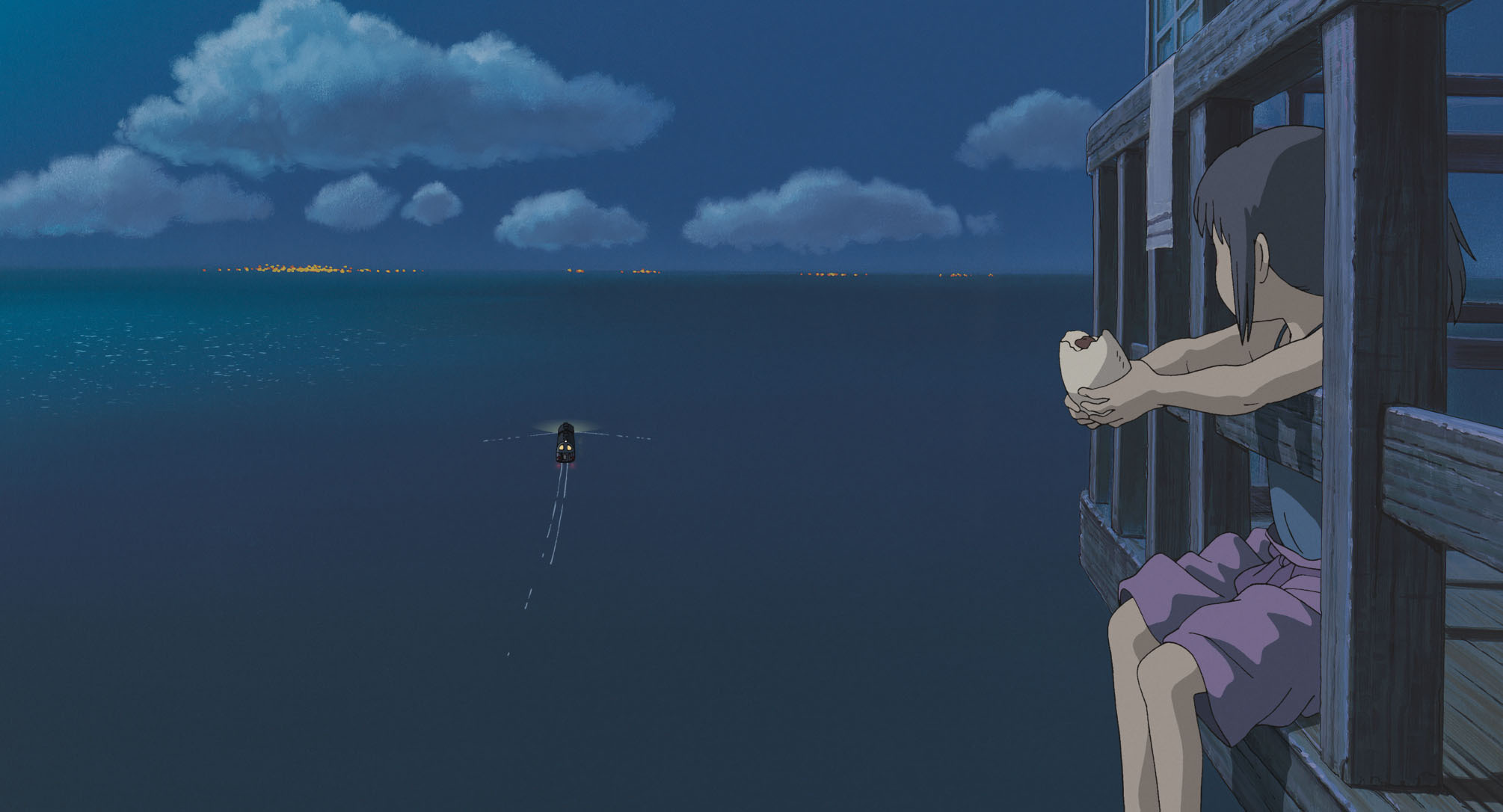 It’s hard to overstate the value of Studio Ghibli’s attention to detail, or Miyazaki’s beautiful animation. Spirited Away is fantastically visually dense, and packed with tiny touches: The flash of a zipper as Chihiro’s father runs toward a low-placed camera until his bulging waistline dominates the frame, or the squeaky-toy noise an animated lantern makes when bouncing through a dark woods. It may take a dozen rewatches for viewers to catch the visual details poured into each frame, the way drifting masks with no bodies still cast shadows representing their true robed forms, or the creepy flopping sagginess of the mysterious foods Chihiro’s parents suck down on their way to pigdom. Studio Ghibli’s films are marvels of artistry in the execution, tempered for maximum emotional impact: Joe Hisaishi’s music, the bright complicated colors, the alternately overwhelming and cutesy sound design, and a perfect voice cast all go into making this an effective story.

But in the end, all that matters is that the emotions feel real, whether Chihiro is navigating grief, despair, confusion, or triumph. The fascination of Spirited Away is that so much around her is baffling, ruled by laws she can’t understand, because they’re always changing around her. And yet her focus on a cause cuts through all the nonsense and distraction like a knife. And it gives Spirited Away a backbone, throughout all its loosely connected episodes, long stretches of quiet downtime, and unanswered questions. Once someone else’s needs become dominant for Chihiro, once she stops thinking about her fears and starts acting on her emotions, everything else falls away as unimportant. This, too, is a longstanding theme in Miyazaki’s work. Villainy is temporary and doomed, no system or structure is permanent, and acting without reservations from the depths of a pure heart will always win the day. There are worse lessons, for kids and adults alike.

In the Forum, Scott Tobias and Genevieve Koski continue the conversation by talking over Spirited Away’s creepy whimsy, moral lessons, and universal appeal across a variety of age groups. And tomorrow, Noel surveys the “kid down the rabbit hole” tradition of children’s stories.