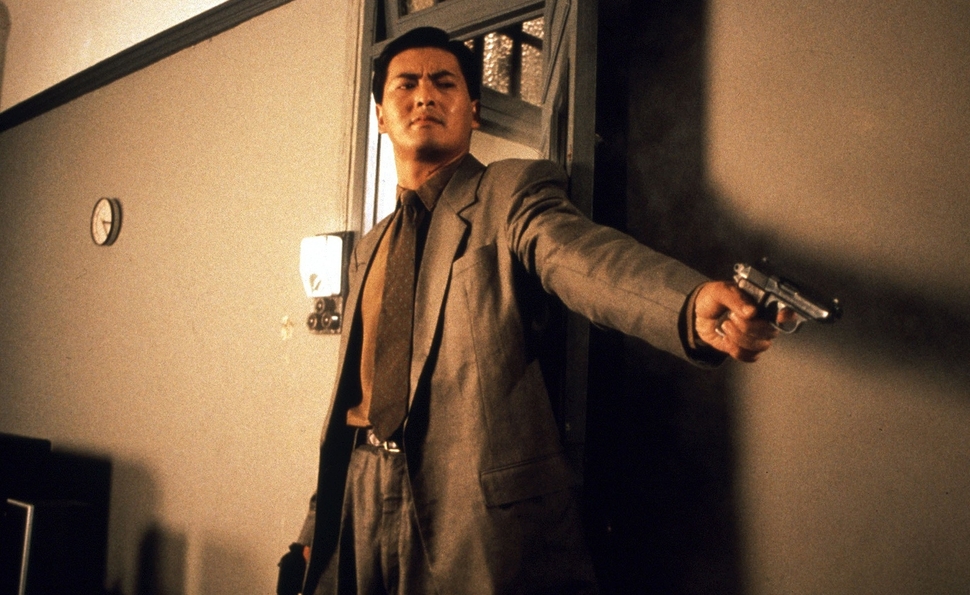 The sincerity and sensation of John Woo’s The Killer

It’s impossible to understate what a shock it was for Western viewers to encounter Hong Kong action films in the early 1990s. For many film enthusiasts, the first indication that something was happening across the ocean came via Quentin Tarantino, a Hong Kong enthusiast who, in the many interviews he conducted as an emerging director, happily provided a list of Hong Kong influences. His 1992 debut Reservoir Dogs—with its code-following cops and criminals and its multi-pointed, chamber-to-the-head standoffs—owed a debt to Hong Kong, specifically City On Fire. Catching up meant seeking out midnight screenings, tracking down VHS tapes from Tai Seng Entertainment or the gray markets of big-city Chinatowns, and getting tips about can’t-miss films via the then-nascent Internet. Making the effort, and branching out beyond the action fare, meant stepping into a world of filmmaking all its own.

For a good stretch of the 1970s through the 1990s, the Hong Kong film industry not only held its own against Hollywood films, it pushed back. Hong Kong trailed only behind Hollywood in the number of films it exported. On their home turf, Hong Kong movies often beat their Hollywood counterparts at the box office. David Bordwell’s indispensable book Planet Hong Kong notes that “from 1977 to 1988, attendance was stable at about 65 million per year. And the audience preferred Hong Kong films… Eleven of the top twenty films of the 1970s were Hong Kong movies, and the top four were far ahead of the first Hollywood import to make the list (The Towering Inferno). In some years, no foreign film even ranked in the top ten.”

It might be just as impossible, from the perspective of 2015, to understand why those films felt so new to Western eyes, however much they relied on reworking, repurposing, and intensifying elements from Hollywood. In the intervening decades, Hollywood has absorbed the influence of that era of Hong Kong filmmaking, importing—for a while—notable Hong Kong directors, making Jackie Chan a star in America, and incorporating touches borrowed from Hong Kong action films in everything from The Matrix to Charlie’s Angels. Yesterday’s kinetic innovation is tomorrow’s raw material for Ballistic: Ecks Vs. Sever. 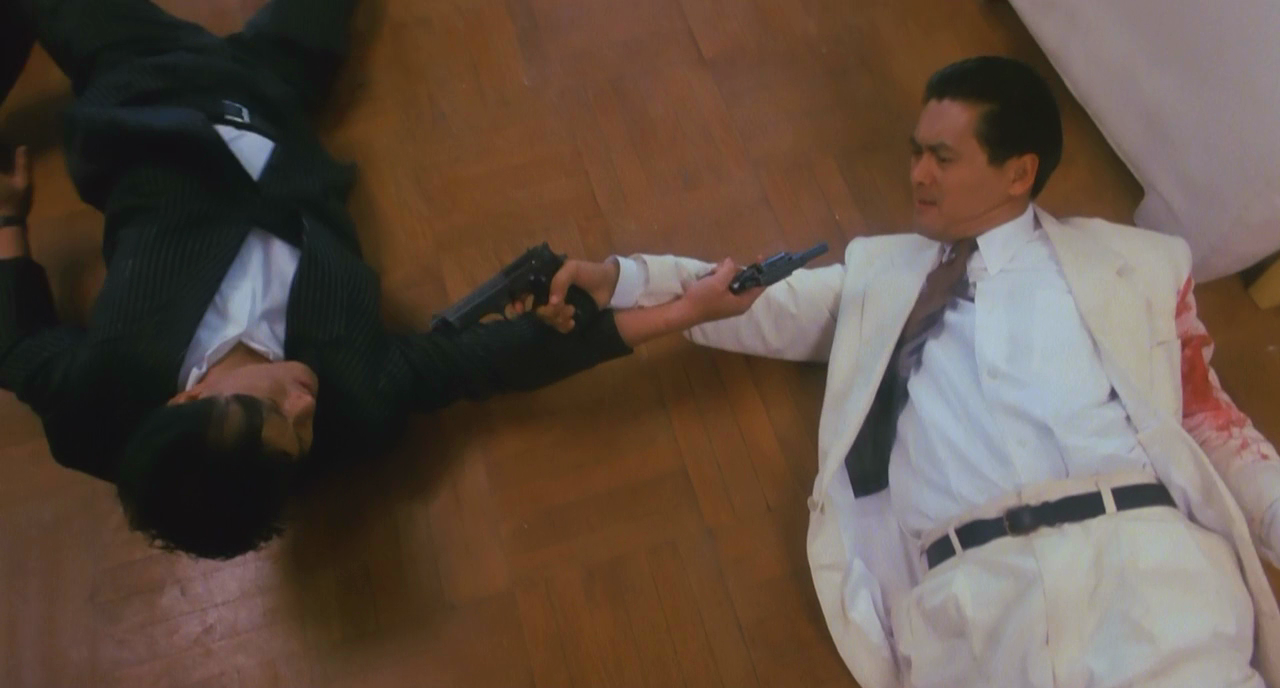 Yet as widespread, and diluted, as Hong Kong’s influence became, the best films from what now looks like its golden age have lost little of their power to stir and entertain. Released in 1989, The Killer first drew worldwide attention to director John Woo and helped train the eyes of the film world on Hong Kong. Woo was already into his second decade behind the camera, having previously helmed everything from film adaptations of Cantonese opera to kung-fu films to comedies. The lattermost became something of a specialty for Woo, but it had also started to net him diminishing returns. Woo’s 1986 film A Better Tomorrow changed that, revealing him as a superb director of action scenes with an ability to bring thematic heft and operatic grandeur to crime movies. The movie was remarkable in its own right, but it also set the stage for future developments, pairing Woo with frequent leading man Chow Yun-Fat and helping create an appetite for stories set in the criminal underworld of the triads. (A Better Tomorrow and its sequel proved so popular that fans dressed like Chow’s trenchcoat-clad character, despite the Hong Kong heat.)

Given a bigger budget, a wider audience, and greater expectations, Woo had a lot to live up to with The Killer, and it plays like the work of a filmmaker operating at the highest level of his abilities, from an opening scene in a church filled with candles and doves that establishes protagonist Ah Jong (Chow) as a principled assassin committed to killing only those who deserve to be killed to a finale that uses the same church as the site for the collapse of Ah Jong’s life, and the code by which he lived.

Ah Jong’s first job, killing a gangster operating out of a nightclub, doubles as a primer in Woo’s approach to action. It’s frenetic, but exquisitely choreographed. Woo never loses sight of the many gunmen who flood the screen, or who’s doing what at any given time. It’s put together with a sense of musicality: Ah Jong knocks on his target’s door and a lackey slides it open, only to be answered by a string of shots. From there, the film slips into and out of slow motion—a device that in lesser hands would seem unnecessarily showy. Here, it indicates a filmmaker in full command of his craft, carefully shifting the rhythms to create the effect he desires. The scene is riveting not because of what it portrays—it’s the stuff of countless crime movies—but how Woo portrays it. He borrows from acknowledged influences like Sam Peckinpah and Martin Scorsese, but there’s no mistaking The Killer for anyone else’s work. A Woo action scene has a flow all its own.

It’s also brutal. Whatever Ah Jong tells himself about honor, he deals in death, and Woo doesn’t cut away from his victims’ blood spurting into the air. The slo-mo and careful editing lend the violence a sense of lyricism, but it’s an ugly sort of poetry. The scene ends tellingly, too. Discharging his gun close to the face of the nightclub’s singer Jennie (Cantopop star Sally Yeh), Ah Jong blinds her, and after an intense stretch of rapid cutting, Woo’s camera rests as she writhes in agony in Ah Jong’s arms, her blood staining the the white scarf he’d cooly draped around his shoulders. Whatever lies he’s told himself about the nobility of his actions, he can’t believe them anymore. 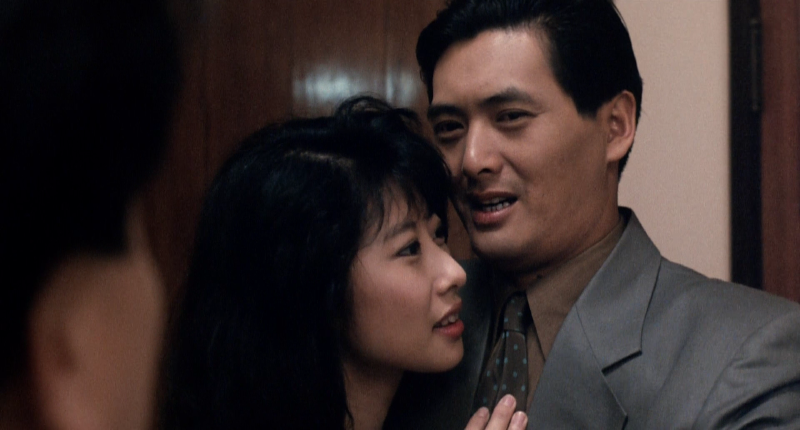 Ah Jong has a look and an attitude borrowed from Alain Delon in Jean-Pierre Melville’s Le Samouraï, a Woo favorite that traffics in some of the same “lonely man of honor” themes. The trajectory he follows for the rest of the film is Magnificent Obsession, a twice-filmed melodrama—once in a version starring Irene Dunne and Robert Taylor, later in a version directed by Douglas Sirk and starring Rock Hudson and Jane Wyman—about a playboy who inadvertently causes the death of a surgeon and then blinds his widow, with whom he subsequently falls in love and aids under a different identity. (It seems less ridiculous, and more moving, in context.) After getting to know (and falling for) Jennie, Ah Jong decides to take one last job in order to pay for the surgery that will restore her sight.

But it’s not that simple: Ah Jong chooses the wrong job to retire on. He also attracts the attention of Detective Li Ying (Danny Lee), who makes it his personal mission to track Ah Jong down. Further complicating matters is the grudging, growing respect the antagonists develop for each other. Li is no less determined to bring Ah Jong to justice. But he also recognizes that there’s good in the seemingly cold-blooded killer when Ah Jong risks capture by running a girl caught in the line of fire to the hospital, instead of fleeing the scene. Chow and Lee played against each other in City On Fire, and their characters’ relationship becomes the focal point of this film as well. They grow closer and start to participate in what Bordwell has described as “the moist, soulful exchanges between urban warriors bound together in duty and friendship” as they recognize their kinship, despite being on opposite sides of the law. Woo draws directly from Magnificent Obsession, but also from melodrama in general. Ah Jong has a cool demeanor, but he and the other characters roil under the sway of outsized emotions.

Like other Woo films, The Killer stages a clash between good and evil that squeezes the central characters between opposing forces. Born to a family that had little after fleeing the communist revolution in China, Woo owed his education to donations from the Lutheran church. He considered becoming a minister and in a 2004 interview still suggested the ministry, or teaching school, would have been his career path if he hadn’t become a director. In some ways, he just redirected those energies into film and stories concerned with morality, sin, and redemption. There’s nothing explicitly didactic in The Killer, but there’s also no watching it without considering the nature of right and wrong, contemplating the cost of violence, and becoming invested in Ah Jong’s desire to change his life. Its gunplay has a charge, but Woo often pushes until watching it becomes uncomfortable. The finale begins as a thrilling setpiece, but it ends in tragedy and desecration, making a ruin of the church Ah Jong has sought out for its peacefulness, but not its spiritual solace.

In many ways, The Killer stood out at the time thanks to its willingness to push its key elements further than any Hollywood action film would: its action, but also its high emotion and moral concerns. In the years that followed, the action proved easier to imitate than the other elements. As Hollywood processed Hong Kong’s influence and talent, it’s no wonder Woo had his greatest success via Face/Off, which allowed him to play out his most abiding concerns about the nature of good and evil on the widest possible canvas, via a face-swapping premise that would play as over-the-top if it didn’t come from a director so invested in its themes. That same sincerity is part of what made, and makes, The Killer such an ideal gateway to Hong Kong action filmmaking, and other corners of the world of popular Hong Kong film. However much about it looks strange to newcomers—the unfamiliar scenery, the local customs, the up-to-11 volume of the action—Ah Jong and Danny’s struggles to get out of their troubled worlds with their souls intact needs little translation.

Our Movie Of The Week look at The Killer continues Thursday with Mike D’Angelo and Scott Tobias discussing its impact on film culture and how their reactions to it have changed over the years, and Charles Bramesco on the ways Jean-Claude Van Damme served as a gateway to Hollywood for Woo and other Hong Kong directors.