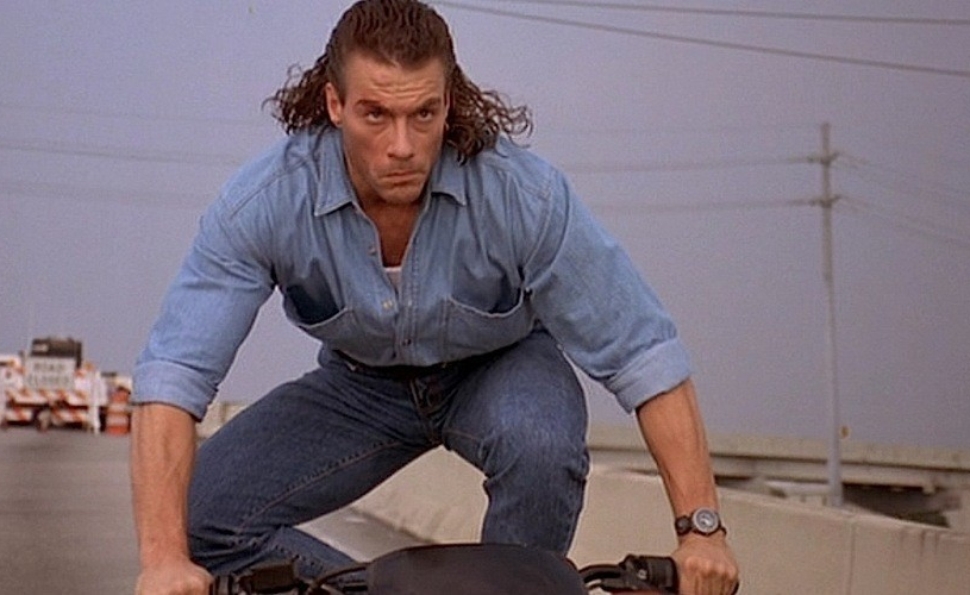 In Jean-Claude Van Damme’s latest film, the organ-theft thriller Pound Of Flesh, he owns the screen. He appears in almost every scene, and when he’s present, all the action revolves around him. Plot points exist only to nudge him from beatdown to beatdown. Other characters lives’ begin and end in relation to his. And the camera drools over his full splits with a fetishistic intensity rarely found outside of hardcore pornography. It’s a messy, dim, stylistically indistinct film, but that hardly matters to its intended audience, because this is also a JCVD movie. Director Ernie Barbarash had one job: to construct a hundred-minute obstacle course for his leading man to punch, kick, strangle, and stab his way through. Without Van Damme, the film would have zero value, and no reason to exist.

That wasn’t always the case with his movies. Even as Van Damme began to age out of his late-’80s-to-early-’90s heyday, he attracted accomplished, aesthetically assured filmmakers that could do more than assemble starring vehicles for an idiosyncratic actor. Between 1993 and 1998, three titans of the Hong Kong New Wave tapped Van Damme as the poster boy for their big debuts in Western cinema. Action grandmaster John Woo brought him to the bayou for Hard Target, Tsui Hark stuck him with Dennis Rodman in Double Team and then managed to take a step down by pairing him with Rob Schneider in Knock Off, and Ringo Lam had him pulling double duty as a French cop and his Russian twin in Maximum Risk.

These four films represent the unlikeliest of international efforts: Chinese films financed with American money starring a Belgian martial-arts expert. At the time, cinephiles bronzing and mounting their VHS copies of Woo’s Bullet In The Head cried sacrilege, but posterity has proven Van Damme was an ideal conduit between Hong Kong and Hollywood. In his elegant combination of grace and brutality, Van Damme split the difference between bullheaded American action and agile New Wave cool.

Like any fighter worth his salt, Van Damme makes it all looks easy. But his self-styled method of combat actually fuses a complex array of disciplines into a personalized form uniquely suited for Woo’s signature mode of filmmaking. Onscreen, it can sometimes seem as if Van Damme is having trouble connecting one word to the next, but his physicality contains multitudes. A young Van Damme began learning Shotokan karate at age 10, earning his black belt by 18 and mastering Muay Thai and Taekwondo along the way. His training let him get a leg up on the art of kickboxing (which appropriately propelled him to one of his first leading roles, in 1989’s Kickboxer), but his years spent as a ballet student exerted a comparable influence over his movements. Van Damme pivots from strike to strike as if he’s submerged in water, spinning between kicks with a dancer’s fluidity. 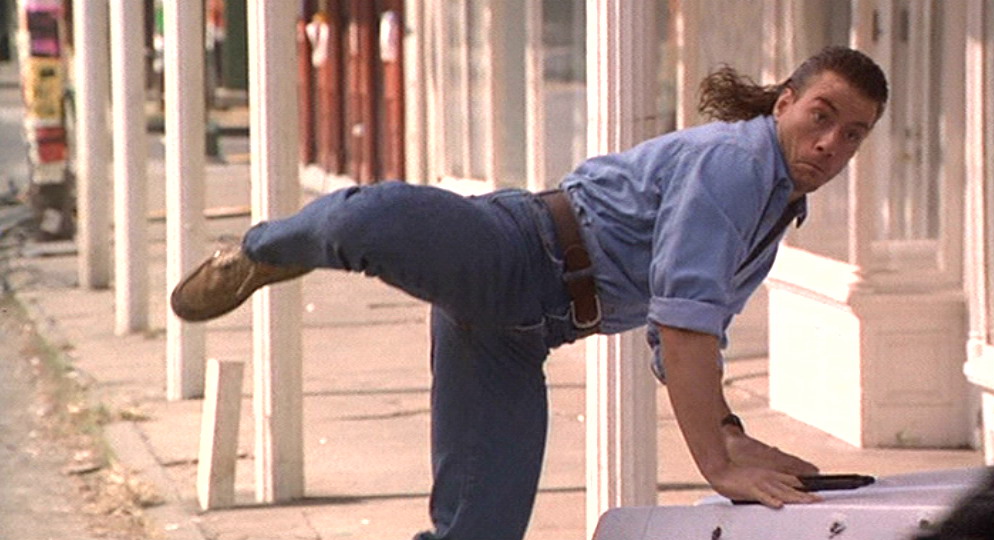 The rhythm of Van Damme’s attacks provided Woo with an ideal outlet for his stylized marriage of serenity and violence. In the copious fight scenes strewn throughout the 1993 film Hard Target, Woo’s camera matches Van Damme blow for blow, anticipating his next move like an old sparring partner. Woo’s penchant for temporal dilation was in full form, shifting from hyperkinetic speed to slow-mo to bring out the full cinematic effect of Van Damme’s brute force. The climax of Hard Target collects Van Damme’s grizzled ex-Marine Chance Boudreaux (the JCVD approximation of a Cajun accent is a thing of beauty, like a painting someone’s set on fire) and his enemies at a warehouse storing Mardi Gras floats for a bullet-riddled showdown. As Chance sidesteps and evades his opponents, Woo hectically leaps between cuts, juxtaposing extreme close-ups, whip pans, and quick zooms. But when Chance goes in for the kill, snapping a man’s arm over his shoulder, Woo knows to maximize the moment and slow everything to a crawl. The audience can practically hear the individual shards of bone splintering.

What’s more, Woo contrives an atmosphere of heightened emphasis that accounts for Van Damme’s distinctive (some might say “poor”) acting skills. Van Damme’s Chance has seen some shit, having survived a tour of duty and life on the treacherous streets of N’awlins. To put it flatly, Van Damme does not have the gravitas required to believably inhabit such a role, and his sincerest efforts only land him in strange, confusing territory. The lunatic genius of Hard Target, and, in a larger sense, Woo’s career, is that Van Damme’s incoherent, mumbling pseudo-Cajun is probably the fifth-weirdest element of the film. How can viewers get hung up on Chance’s regionally nonspecific dialect when Wilford Brimley is shooting arrows at armed men from horseback? In one of the film’s silliest flourishes, Van Damme punches an actual snake in the face, then sets it as a booby trap for the men tailing him. At a certain point, Chance’s core ridiculousness settles as another expression of Woo’s maximalist hunger for more, more, more.

To diminishing returns, Tsui Hark and Ringo Lam go even further in creating a tone to match Van Damme’s laughable performances. Watching Double Team and Knock Off back-to-back, it’s easy to get the impression that Tsui’s best plan was to saddle Van Damme with a sidekick flamboyant and irritating enough to draw the audience’s attentions away from the leading man. (It’s just as easy to get the impression that the performers were hastily railing lines of cocaine between takes on set; Double Team includes underwater laser prisons, “cyber-monks,” and a villainous turn from Mickey Rourke at peak Mickey Rourkeitude.) Dennis Rodman takes second billing in Double Team as arms dealer Yaz. Even though Yaz has no stated background in basketball, none of the other characters in the film question why he speaks primarily in b-ball puns. There’s an unspoken agreement between the other characters to overlook this inexplicable behavior, because the folks at home need to be reminded every few minutes that, oh right, Rodman is involved with this film because he’s a career NBA star. And in Knock Off, Rob Schneider is even worse. He and Van Damme are both there to fill the screen as Tsui veers off on insane formal experiments, such as a POV shot from a foot’s perspective as it slides into a shoe, or a shot that follows the electrical current of a phone call as it darts across circuit boards. 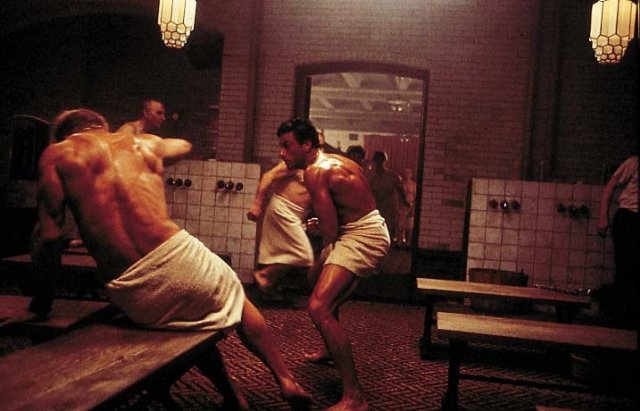 With Maximum Risk, Lam’s camerawork enhances Van Damme’s martial-arts prowess with complementary formal choices. Admittedly, the plot is a bit lackluster, neither as loony as Tsui’s pictures nor as engaging as Woo’s. But Lam captures the balletic brawn in the Van Damme method with a rapturous gaze. Lam spins ravishing footage out of his leading man’s twisting, oiled-up muscles, turning the undercurrent of homoeroticism pervasive in ’80s and ’90s action way up, to surprisingly gorgeous ends. Van Damme and an assassin tangle in a cramped elevator during a climactic battle, and at one point, each has the other in a headlock. Lam tightens his focus with progressively closer shots, the dim elevator lights reflecting off the bulging veins in the men’s foreheads. They look like they could pop at any moment, and Lam’s nimble photography amply ratchets up that tension.

Van Damme and the Hong Kong school harmoniously coexisted by accepting the humble pleasures of contradiction. They recognize that measures of tranquility are always present in shows of force, and vice versa. In a scene from Hard Target, Brimley’s character retrieves a shotgun that hasn’t been used in years from his crawlspace. Before he hands it to Chance, he admires it for a moment and pumps the barrel. In that moment, and only for a moment, the dust from the gun floats in the light, a faint mist of gold hanging poetically in the air. Symbols don’t get cannier than this: The gun is Van Damme’s, but the dust is Woo’s.

This ends our Movie Of The Week look at John Woo’s The Killer. Don’t miss Keith’s Keynote on the way the film collided with and influenced American cinema in the 1990s, and Scott and Mike’s Forum on the film’s melodrama, style, and the cinema of cool. And tune in next week when we hit the ground running (from bears, wolves, the elements, and our hidden selves) with Man Vs. Wild month, starting with Werner Herzog’s amazing documentary Grizzly Man.