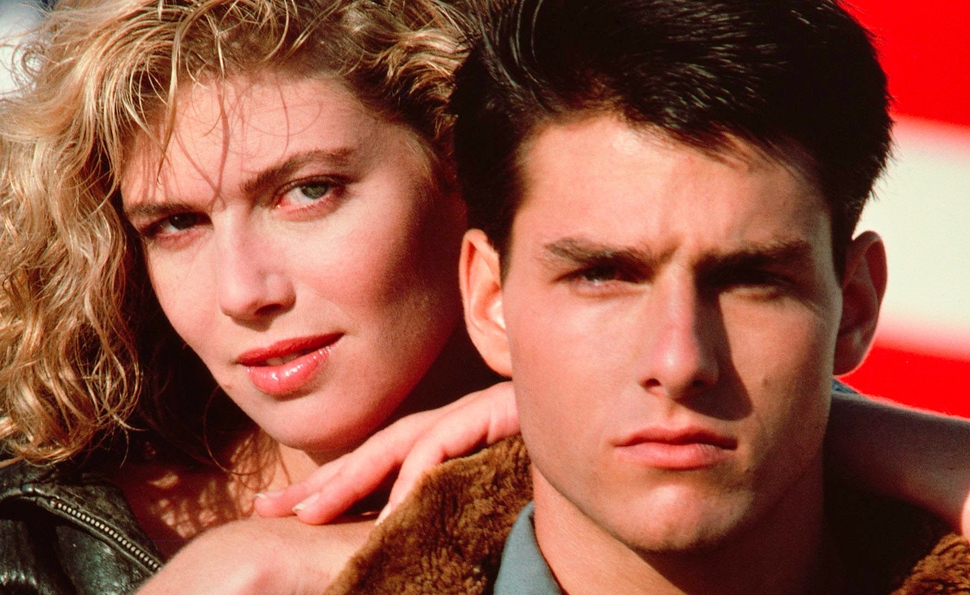 In Top Gun, the world belongs to the winners

“On March 3, 1969 the United States Navy established an elite school for the top one percent of its pilots. Its purpose was to teach the lost art of aerial combat and to insure [sic] that the handful of men who graduated were the best fighter pilots in the world.

Top Gun opens with the title above, which in the first two sentences establishes the elite “Top Gun” flying school in Miramar, California, “Fightertown U.S.A.,” where  most of the action takes place. The third sentence serves no purpose, but so perfectly encapsulates the film’s “America, fuck yeah” bravado that the entire subsequent scenario is superfluous. “Top Gun” isn’t working toward reviving the lost art of aerial combat, or graduating the best fighter pilots in the world: It’s already done that. And so the story about to unfold isn’t about the hero’s progress, but about affirming what we already know: We’re totally fucking awesome, and if there’s any doubt about it, it’s the doubt itself that’s the problem, not any legitimate question about our totally fucking awesomeness. Has Hollywood ever produced a more effective military recruitment tool? Even wartime propaganda introduces enemies more imposing than self-doubt.

With that in mind, meet Lt. Pete Mitchell, better known by his call sign, “Maverick.” Played by a 23-year-old Tom Cruise, in a performance that graduated him to the ranks of the best-of-the-best of bankable young stars, Maverick doesn’t lack confidence. And for the 13 years between Top Gun and Magnolia—and for most of the time since, save for his jokey unctuousness in Tropic Thunder—Cruise ran with the Type-A aggression and bleach-toothed charm he established as Maverick. As this summer’s fine Edge Of Tomorrow proved yet again, Cruise’s energy and magnetism make him the model blockbuster star, if only because they allow him to be heard above the din. (Contrast that with the likes of here-today/gone-tomorrow stars like Taylor Kitsch, Aaron Taylor Johnson, and Sam Worthington, who are effectively buried by spectacle.)

Produced by Don Simpson and Jerry Bruckheimer, and directed by Tony Scott, Top Gun has a magic-hour slickness and need-for-speed kineticism that codified the Simpson/Bruckheimer style for many blockbusters to come. But it also epitomized an era in Hollywood when being a winner was paramount. There would no more moral victories, ambiguous victories, or Pyrrhic victories—only actual victories. In other words, this was not going to be the decade of Rocky, where it was enough for a palooka to put up a good fight against the odds. This was the decade of Rocky II, Rocky III, and Rocky IV, where the Italian Stallion would win his rematch against Apollo Creed, fell cartoonish brutes like Clubber Lang and Ivan Drago, and  buy a robot for his ungrateful brother-in-law. This was the decade when a runty Jersey transplant could use his car-waxing skills to defeat the bullies from the Cobra Kai dojo, and a videogame prodigy could be whisked to outer space as The Last Starfighter. Winners all.

Consider the journey taken by Maverick in Top Gun. Like any hero on a quest, he has setbacks and obstacles, moments where his faith in himself and his mission are shaken. (To say nothing of his sexuality, but that’s another discussion.) But there are never any consequences to the choices he makes; someone’s always there to reassure him of his brilliance, no matter how reckless or arrogant his behavior. Five examples:

Scene one: Stationed on an aircraft carrier in the Indian Ocean, Maverick and his partner Goose (Anthony Edwards) use a tense aerial encounter with an enemy MiG-28—the enemy is unnamed, though it probably rhymes with “the Soviet Union”—to do an inverted dive a few feet above the opposing plane, flip the pilot the bird, and take a Polaroid. Maverick then ignores orders to land, with his fuel tank on red, in order to escort a spooked fellow pilot to safety.

Result: Maverick and Goose get a dressing-down from their superior officer, who concedes that Maverick did “an incredibly brave thing” when he should have landed his plane. (“Son, your ego is writing checks your butt can’t cash.”) Maverick is then told he’s “a hell of an instinctive pilot, maybe too good,” and then punished by being offered the career-making opportunity to attend Top Gun for five weeks.

Scene two: In dress whites, Maverick and Goose head to the local watering hole, where Maverick sets his sights on Kelly McGillis’ Charlie and serenades her with an a cappella rendition of The Righteous Brothers’ “You’ve Lost That Loving Feeling.” He then introduces himself to her by his superhero name, Maverick, not Pete Mitchell. Then he follows her into the ladies’ room.

Result: Charlie initially resists him, and surprises him by reappearing as a civilian flight instructor. But ultimately, the ploy works. He’s every bit as charming as he thinks he is. The Righteous Brothers song becomes their song in the end, and she believes he’s an awesome pilot (“I see some real genius in your flying, Maverick”), but couldn’t say as much around the other guys. (“I just don’t want anyone to know that I’ve fallen for you.”)

Scene three: Maverick uses a controversial maneuver to take out Jester (Michael Ironside), one of the school’s hard-nosed officials. He follows Jester below the 10,000 feet “hard deck” to take him out, which isn’t allowed. He then buzzes the control tower, in an unauthorized fly-by.

Result: Another dressing down, from his by-the-books rival Iceman (Val Kilmer), who calls him “unsafe,” and from his superior officer Viper (Tom Skerritt), who chews him out for breaking a major rule of engagement. Viper warns Maverick that he has to obey the rules. But just when it looks like Maverick’s status is diminished, Viper privately takes a jab at Jester: “He got you, didn’t he?”

Scene four: Maverick is supposed to cover a fellow pilot’s wing, but leaves him to chase the elusive Viper. As a result, both pilots are killed in simulation.

Result: “That was some of the best flying I’ve seen yet, right up until the part you got killed.” So, greatness affirmed, despite the fatal result.

Scene five: Maverick is serving as Iceman’s wingman this time, but Maverick gets impatient with Iceman’s deliberate style and wants him to move aside so he can take a shot. Once that happens, Maverick’s plane gets in a “jet wash” and spins out of control. Goose smacks his head while ejecting, and dies.

Result: Maverick needs a lot of reassurance after this one, and he gets it from everyone. A three-person military panel declares him not at fault and cleared for flight. Goose’s widow (Meg Ryan) stops selfishly focusing on her own grief to say, “God, he loved flying with you, Maverick.” Charlie tracks him down at a bar, calls him “one of the best pilots in the Navy,” and urges him to go on. Then Viper talks about flying alongside his old man, who made the ultimate sacrifice in a terrible dogfight.

“I’m not going to sit here and blow sunshine up your ass,” Viper declares, but at that point, his ass could sing “Zip-A-Dee-Doo-Dah.” Maverick breaks rule after rule, carries himself with a profound arrogance and disrespect for authority, and finally reaches a moment where his ego seems responsible for his best friend’s death. But there are no consequences. It’s not his fault. He’s still one of the best pilots in the Navy. And it’s time for him to show it by taking out some MiG-28s in a real aerial showdown.

What has Maverick learned? Nothing, other than never to question his excellence. Top Gun pulls off the neat trick of making it seem like Maverick has achieved redemption—Scott’s terrific staging of the aerial footage does much of the convincing—but his arc is actually closer to a straight line. Maverick is still the tower-buzzing showboat he was in the beginning. The Righteous Brothers are there for him in the end, just as they were when he serenaded Charlie at the bar. He’s a winner. He succeeded.

Tomorrow, our Top Gun discussion continues with a staff forum breaking down the film’s influential “Miller Time” style, its ripe notions of military heroism and sexuality, and more. Then on Thursday, Noel Murray touches down gently on the runway with some thoughts on Cruise post-Top Gun.