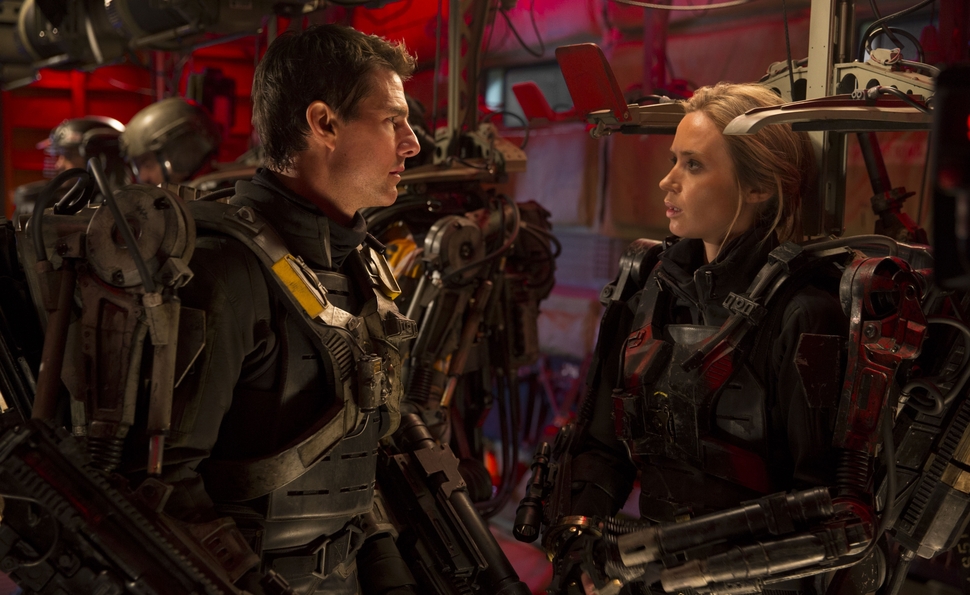 Even before Edge Of Tomorrow announces its central gimmick, it doesn’t play by the usual action movie rules. An opening montage establishes that Europe has taken the brunt of an alien invasion, and the primary duty of the film’s hero, Major William Cage (Tom Cruise), is to serve as a smiling talking head selling the public on the necessity, and winnability, of a long, difficult war. He looks the part of an American hero, but behind closed doors, he knows his limitations. When the gruff General Brigham (Brendan Gleeson) informs him he’ll be embedded with troops making a push into France—a D-Day-like move that’s one of several parallels with the two World Wars—Cage tries to talk his way out of his duty. When talk fails, he tries extortion. Then he simply hoofs it. He isn’t, in other words, the sort of character who usually serves as a film’s hero, or the sort Cruise usually plays.

Cage doesn’t get far, however, and after tussling with Gleeson’s security force, he wakes up at a forward base preparing for an assault on the alien invaders. Stripped of his identity, Cage is treated like just another grunt likely to be chewed up by the Mimics, strange visitors from another planet who’ve proven resistant to even the most advanced technology of Edge Of Tomorrow’s near-future world. Victories have been few, but they’ve been rousing—particularly a fight in which Sgt. Rita Vrataski (Emily Blunt) emerged as a one-woman fighting force, earning the nickname “The Angel Of Verdun” and becoming a propagandist’s dream. (Meanwhile, her brusque personality has also earned her the the less-flattering name “Full Metal Bitch.”) Thrown, almost literally and with considerable cowering, into the fray wearing a clunky-but-powerful battle suit, Cage meets the enemy head-on, learning how to fire his weapons in the field, and even encountering Rita, just before she’s killed by an enemy.

Then he wakes up at that forward base again, amid the preparations for an assault on the alien invaders. Stripped of his identity and treated like just another grunt likely to be chewed up by the Mimics, Cage does it all over again, though not quite like he did the first time.

Adapted by Christopher McQuarrie and Jez and John-Henry Butterworth from the illustrated Japanese science-fiction novel All You Need Is Kill by Hiroshi Sakuraza, and directed by Doug Liman, Edge Of Tomorrow begins and ends as a gripping military science-fiction film. The opening act puts a cowardly, ill-prepared hero in the middle of chaos, facing some unnervingly inhuman creatures that look like crosses between dragons, octopi, and live wires. The finale finds a much-better-prepared version of the same hero facing off against the same enemy in a blockbuster-requisite attack featuring the best special effects at the filmmakers’ disposal. Both benefit from Liman’s assured, middle-of-the-action direction and a richly realized world of devastated landscapes and desperate soldiers whose state-of-the-art firepower does little to insure their survival.

But Edge Of Tomorrow’s long, rich middle act sets it apart, as the film keeps finding new ways to play with its central gimmick. Cage heads into battle again, and dies. Wakes up, heads into battle, makes sure not to repeat the same mistake, makes a different mistake, and dies. For all the impressive special effects on display in the film—and there are many—the most disorienting tricks here come from the editing, which plays with time and perception in a way that’s only possible in film. Sometimes scenes cut off abruptly, thanks to Cage’s unexpected death. At other times, it only becomes apparent midway through a scene that what we’re seeing for the first time, Cage has already lived through many times over.

The obvious point of inspiration here is Groundhog Day. But while Edge Of Tomorrow lacks the obvious philosophical aspirations of Bill Murray and Harold Ramis’ 1993 classic, it also has more on its mind than simply blowing up aliens. Few films have been as inspired by videogaming as this one—even films based on videogames have never given a hero a reset button so he can try again until he gets it right. But unlike Mario or Master Chief, Cage changes with experience, and he ends the film a different person than he began it, after dying one brutal (though PG-13-friendly) death after another. He also develops feelings for Rita that deepen each time he meets her, though for her, it’s always the first time. Each day gives him another chance to get it right—in battle and elsewhere—yet no matter how much he learns and what he tries, he always ends up getting something wrong. The poignancy of his plight is never far from the surface, however frenetic the action.

But eventually, the action starts to overwhelm everything. Edge Of Tomorrow’s finale can’t live up to what’s come before, though that’s mostly because what comes before is so rich and unusual, particularly in the middle of a summer blockbuster season that doesn’t always value richness or novelty. Blunt keeps Rita hard and distant for much of the film, and it’s particularly fun to watch her play badass heroine to Cruise’s reluctant hero in their early scenes together. (In another neat inversion that nods to a different point of inspiration, Bill Paxton is on hand as a badass Kentucky drill sergeant who would eat his sniveling “Game over!” soldier from Aliens alive.) It’s the rare action film whose quiet moments cut as deep as its fight scenes. Cage wages the same battle over and over again until he can do it with his eyes closed—in one instance, literally—but Edge Of Tomorrow is never better than when it finds equal drama in what his battles do to him, whether or not he defeats the bad guy and moves on to the next level.