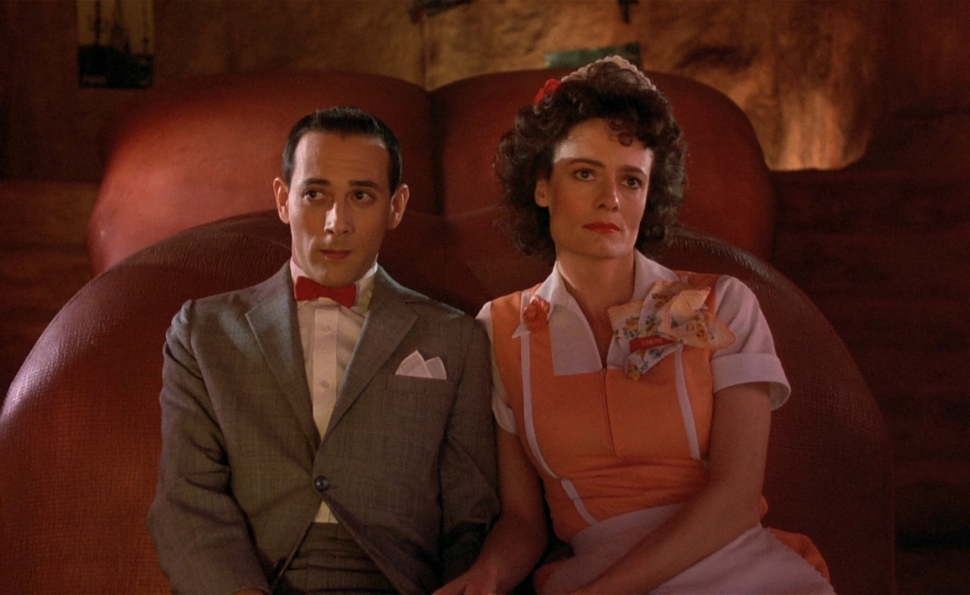 The first time I saw Pee-Wee’s Big Adventure, during its initial theatrical run in summer 1985, it took less than a minute to grab me. Visually, nothing happens during the film’s first 60 seconds—it’s just a spare opening-credits sequence, white letters on black leader (apart from the title, which is brightly colored). Even before that, though, when the 1980s-style Warner Bros. logo still fills the screen, there’s music. An insistent thud-thud-thud at first, just a single note, accompanied by a rising and falling legato pattern played on a harp. Then the piece shifts into the two-note, 4/4 mode that will characterize practically the entire score: duh duh duh duh duh duh duh duh. For whatever reason, that particular sound has strong associations with the circus, and the score for Pee-wee’s Big Adventure has an unmistakable “step right up!” vibe from the get-go; it promises fun, excitement, and strenuous efforts to entertain. At the time, I had no idea who Danny Elfman was (or who Tim Burton was, or even who Pee-wee Herman was). All I knew was that the movie had barely even started, and I was already feeling giddy. Bring it on, whatever it is!

Nowadays, it’s commonplace for movies to draft popular musicians, with everyone from Daft Punk to Radiohead’s Jonny Greenwood contributing original scores to major projects. Back in 1985, though, it was a riskier move. Usually, it’d be a band—Pink Floyd for More; Queen for Flash Gordon—whose participation would be a major selling point, with a soundtrack album available in stores. Elfman, by contrast, was the singer and primary songwriter for a small cult band, Oingo Boingo, which had released three not exactly bestselling albums. (Elfman had also released a solo album, So-Lo, which was an Oingo Boingo record in everything but name, using the entire band on every track.) His only previous experience as a film composer was Forbidden Zone, a little-seen movie directed by his brother Richard. But Oingo Boingo was popular in Southern California, and Burton and Paul Reubens happened to be fans. “Let’s turn this guy into the most influential film composer of the next decade or so,” they probably didn’t say. All the same, that’s exactly what improbably happened, as Elfman’s collaborations with Burton—Batman was the tipping point—made him Hollywood’s top choice for anything vaguely idiosyncratic.

Elfman’s contribution to Pee-Wee’s Big Adventure is incalculable. It was many years before I discovered his work isn’t as blazingly original as I’d assumed; numerous motifs, most notably the signature cue called “Breakfast Machine,” were directly inspired by Nino Rota’s score for Fellini’s The Clowns—which Elfman, to his credit, has always openly acknowledged. But the Pee-wee score transforms Rota’s frantic oompah riffs into something more playful and inviting, and Elfman, working with Oingo Boingo guitarist Steve Bartek, continually comes up with inventive orchestration, giving each individual sequence a slightly different flavor. When Pee-wee is trying to thumb a ride on the highway, a harmonica briefly takes over; in Simone’s French-tinged theme, the instruments suddenly get a slight, plaintive echo, suggesting the distance between her life and her dreams. And for the moment when Pee-wee finds his beloved bike stolen, Elfman tosses Rota aside and pays homage to Bernard Herrmann with a sudden burst of screeching staccato strings straight out of Psycho. (In the hilarious sequence of utter desolation that follows, he manages to weave the Rota-esque motif into the Herrmann homage, which is pretty damn impressive.) Like Quentin Tarantino, he makes what he borrows his own. 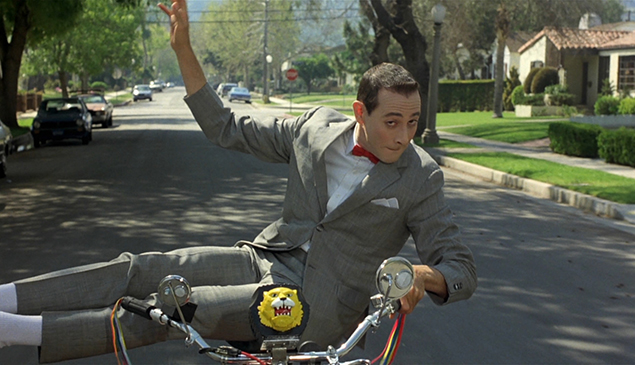 While the Rota and Herrmann influence is fairly obvious, for those who know the source material, Elfman is also more subtly emulating Carl Stalling, the primary composer for Warner Bros.’ Looney Tunes and Merrie Melodies shorts. At that point, Burton had spent his entire career as an animator, and Pee-wee’s Big Adventure is a live-action film with a distinctly animated sensibility. In keeping with that approach, Elfman often has the music respond directly to whatever’s happening onscreen, just as the music in a cartoon would. When Pee-wee shows off for some neighborhood kids on his bike, popping a couple of pathetic little wheelies, the score accentuates his efforts by providing a slight flourish for each one. (Listening to the score, it’s impossible not to see the wheelies in your mind’s eye, at the precise point where they occur.) My favorite example of this is Pee-wee pounding angrily on Francis’ door at the very tempo that Elfman established with him running up the front walk. Usually, the score is the very last element of a movie to be completed, but this moment suggests that Elfman must have gotten an early start. Either that or Reubens just happened to knock at the perfect rhythm for Elfman’s general purposes.

One of the terrific bonus features on the Pee-wee’s Big Adventure DVD (carried over onto the Blu-ray release) is the opportunity to hear Elfman’s entire score isolated from dialogue and effects. This is especially useful, because for some reason, when Varèse Sarabande finally released a soundtrack CD three years after the movie came out—a re-recording, but a very faithful one—it included only a fairly small percentage of the score, totaling about 20 minutes. (The rest of the CD features Elfman’s more pedestrian score for the Rodney Dangerfield comedy Back To School.) All of the hummable tunes are included, but some of Elfman’s most effective and atmospheric cues, like the ominous, four-note Large Marge theme, or the eerie music accompanying Pee-wee’s shadowy presentation of the evidence in the case of his missing bike (“Why? What’s the significance? I DON’T KNOW!”), can only be heard in the movie itself, or via bootleg files that just rip the isolated score from the DVD. Watching the movie this way, it becomes clear that there’s scarcely a moment in it that’s not heightened, and to a large extent defined, by Elfman’s music. For all its terrific gags and inspired images, Pee-wee’s Big Adventure would most likely resemble sketch comedy without that score working to create a unifying flavor. Elfman gives the film its goofy grandeur. 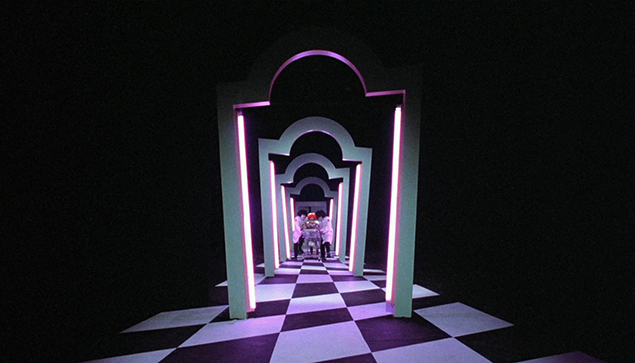 Everybody noticed. Pee-wee’s Big Adventure was only a modest hit (it grossed about $85 million in today’s money), but Elfman immediately started getting more work, and by 1990, one year after Batman, he was everywhere: That year alone, he scored Edward Scissorhands, Darkman, Dick Tracy, and Nightbreed. Other composers began imitating his increasingly recognizable style, to the point where I often paid attention during the credits just to see whether I’d been hearing actual Elfman, or just pseudo-Elfman. He also became one of the few contemporary film composers to have a compilation of his work released: Music For A Darkened Theatre, which assembled tracks spanning 1982-1990. Somewhere along the line, creative exhaustion set in, as it generally does; Elfman began repeating himself, and while he’s continued to work steadily (American Hustle is his most recent effort), fresher voices have long since overtaken him on the cutting edge. For a while, though—especially in his collaborations with Burton, with whom he’s worked on every film except Ed Wood and (for obvious reasons) Sweeney Todd—he achieved a sublime level of demented inspiration. And it all began here, with variations overlaying those two notes. Duh duh duh duh.

Our Movie Of The Week discussion of Pee-wee’s Big Adventure ends here. Don’t miss Tuesday’s Keynote on how Burton and Reubens translated their cartoon sensibility to live action, and Wednesday’s staff Forum on the film’s twists on road-movie and man-child clichés, its childlike sensibility, and more. Next week, join us as we discuss Nicole Holofcener’s sharp, uncomfortable comedy Lovely And Amazing.