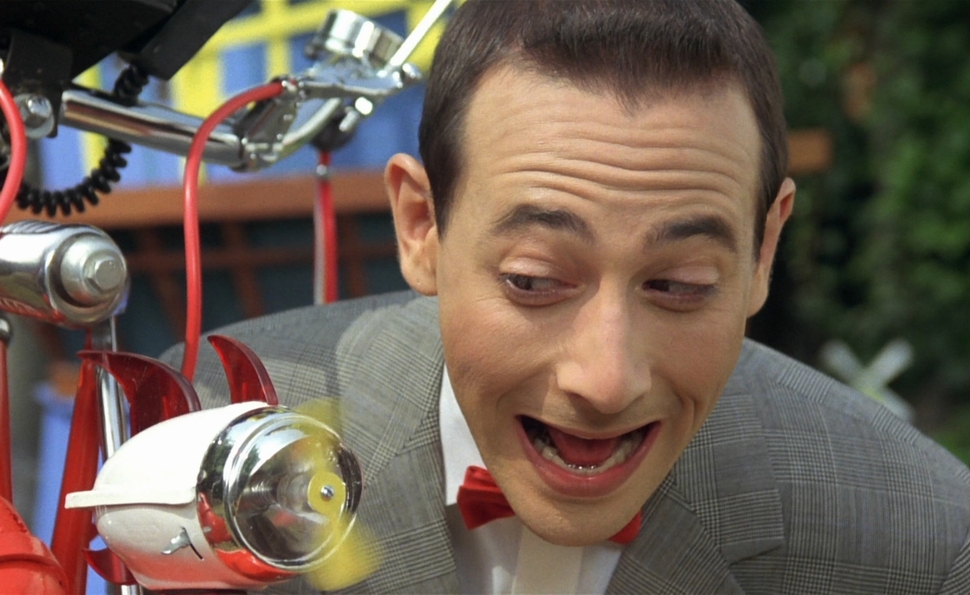 When Tim Burton signed on to direct 1985’s Pee-wee’s Big Adventure while still in his mid-twenties, he was an animation wunderkind and a recent Disney alum who had directed a pair of attention-grabbing shorts: the live-action 1984 Frankenstein riff “Frankenweenie” (which was later adapted into a feature film), and 1982’s “Vincent,” a rhyming, stop-motion-animation tribute to Burton hero Vincent Prince. With Pee-wee’s Big Adventure, the larger-than-life Burton, a bit of a cartoon character himself, graduated to the world of live-action feature films without leaving his animation background behind. His feature-length debut was the best possible vehicle for one Pee-wee Herman, a flesh-and-blood character who was every bit as preposterous as Yosemite Sam or Daffy Duck.

Pee-wee’s Big Adventure contains brief but unforgettable splashes of animation in the form of Large Marge’s hideous transformation into a ghoul (a staple of nightmares for children of my generation and those that followed) and a stop-motion sequence involving dinosaurs. But the entire film is permeated with the anarchic, irreverent spirit not just of early Disney—the creepy Disney that killed Bambi’s mother, gave Dumbo hallucinations, and dispatched Pinocchio to Pleasure Island—but also the classic animation of Warner Bros., which also produced Pee-wee’s Big Adventure.

Like the best films of Burton’s fellow animator-turned-director Frank Tashlin, who also toiled for Warner Bros., Pee-wee’s Big Adventure combines the best of live-action with the best of animation. It embodies animation’s sense of infinite possibilities—the wonderful sensation that a cartoon is limited only by an animator’s fertile imagination—with live-action’s verisimilitude, the feeling that what’s happening onscreen is happening to real people, no matter how preposterous it might all look and feel. Burton brings to the film an animator’s control and meticulousness, which somehow only enhances the unstoppable momentum and energy. Every frame feels storyboarded and meticulously planned in advance, yet the movie doesn’t just move at a brisk pace, it soars at a clip befitting a story about a man in love with a bicycle. Tashlin made his masterpieces with human cartoon characters like Jerry Lewis and Jayne Mansfield; Burton had Pee-wee Herman, backed by a supporting cast of characters that often look like cartoons rendered flesh—or, in the case of Large Marge, begin as human beings and become grotesque cartoons.

Like the work of early Disney and Looney Tunes, the film illustrates a willingness, even eagerness, to traumatize children, to fill their suggestible minds with the kind of nightmarish imagery that keeps kids up all night. Burton’s sizable adventure respects children enough to terrify them with nightmare tableaus involving ghosts and clown paramedics, cognizant that children will intuitively understand that, while things might look dangerous at times for Pee-wee, nothing could ever really hurt him. Pee-wee’s Big Adventure is full of adult peril—biker gangs, escaped convicts, thieves, clowns, jealous brutes wielding dinosaur bones like clubs—filtered through a child’s innocence. Even though Pee-wee encounters danger of all stripes, his spirit carries him through.

This is illustrated most wonderfully in the beloved sequence where Pee-wee (played by Paul Reubens, who’d been performing as the character onstage and on talk shows for several years) ducks into a roadhouse and in his impatience antagonizes a biker gang called Satan’s Helpers. The bikers vow to murder Pee-wee for annoying them, but Pee-wee performs an elaborate dance to the Latin-rock instrumental “Tequila” that inexplicably—but wonderfully—gets Satan’s Helpers to not only let him live, but adopt him as their mascot. The scene’s logic is the fuzzy stuff of dreams, but its sweetness is utterly disarming. Pee-wee doesn’t judge the strange characters he encounters, and in return, they’re won over by his ebullient optimism.

Pee-wee’s unapologetic childishness is his defining quality in other ways as well. He’s the kind of sweetheart who races into a burning pet shop to save all the animals, even gross snakes, but he’s also a self-absorbed brat who cannot imagine an emergency greater than his lost bike, and privileges the return of that bike above all else, especially his friends’ time and energy. The movie captures childhood in its totality—the darkness, lightness, innocence, and self-absorption—which helps explain why the film’s cult extends beyond children to include just about everyone who appreciates awesomeness and joy.

Among its myriad other cartoonish qualities, Pee-wee’s Big Adventure boasts a plot with the elegant simplicity of a Looney Tunes cartoon. Boy loses bike. Boy gets bike back. Shenanigans ensue in the interim. Within that spartan but surprisingly sturdy frame, the filmmakers find ample room for a series of uniformly brilliant setpieces that play to Burton’s strengths as a former animator, as well as to the background Reubens and co-screenwriter Phil Hartman had as alumni of the L.A. improv institution The Groundlings. Burton and Reubens treat their film as the ultimate play-set, filling the screen with everything they’ve ever loved. The result is beautifully orchestrated chaos, given a relentless sense of propulsion by Danny Elfman’s deliriously kinetic score, which is forever pushing the action forward.

But before it turns into a road movie, Pee-wee’s Big Adventure spends an awful lot of time lovingly establishing its protagonist’s world, which is rent asunder by the loss of his beloved bike. At home, Pee-wee leads a charmed life that fills him with such delight, he perpetually cackles with glee. Pee-wee isn’t just content, he’s positively giddy as he lives out every child’s fantasy in an enormous Rube Goldberg contraption of a house filled with everything a kid or an emotionally stunted man-child could possibly want. In the early scenes, Pee-wee leads an existence ruled by ritual and routine, where everything is perfectly in place, from his trips to the gag shop to pick up the latest and greatest novelty items, to the elaborate machinery that makes his breakfast. At the center of Pee-wee’s universe: his bike.

On paper, Pee-wee’s Big Adventure has laughably low stakes: Pee-wee’s bike is stolen, and he sets out to retrieve it. But Burton and company do such a great job of getting audiences inside his myopic, childlike sensibility that the loss of his bike assumes a life-or-death importance. It’s all that matters to Pee-wee, whose life goes from perfect to nightmarish in a heartbeat, so it matters for the audience as well. Burton generates something approaching bleak existential terror out of the prospect, however faint, that Herman won’t get back his bike back, that this affront to all that is right and decent in the universe will somehow go unpunished. Pee-wee’s Big Adventure establishes the stakes for Pee-wee’s quest before sending him out on a road trip filled with wonder and terror in equal measure, letting us know in no uncertain terms that this isn’t just any old bike Pee-wee is searching for: It’s the most amazing bike in the world, the core of his being, his metallic soulmate. 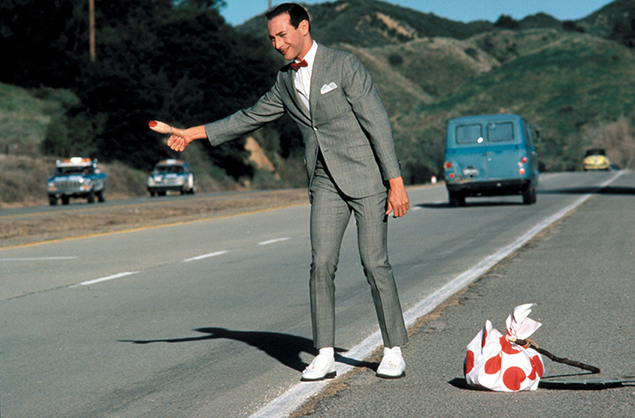 Once that’s established, it transforms the rambling, episodic nature of the road movie—with its stops, starts, and constantly interrupted narratives—from a shortcoming into a strength, by dividing the protagonist’s travails into three-to-seven-minute setpieces that work beautifully on their own while also supporting the central narrative. It breaks down into at least a dozen stand-alone Pee-wee adventures. It wouldn’t take much tweaking to turn this feature into a series of shorts with titles like “Rodeo Pee-wee,” “Alamo Pee-wee,” “Pee-wee Rides The Rails,” “Pee-wee On The Lot,” or “Roadhouse Pee-wee,” but the whole emerges as more than the sum of its parts.

The well-crafted screenplay has three distinct components. It begins by establishing the wondrousness of Pee-wee’s world. Then it sends him out on a road trip filled with heartbreaking disappointments and new friendships. And in its third act, the film grows impish and meta-textual, with Pee-wee learning his bike has been sold to Warner Bros. for use in the kind of Catholic-orphanage tearjerker no one has made since the heyday of Bing Crosby and Mickey Rooney.

Early in the film, Pee-wee interacts playfully with a box of Mr. T cereal, but other than a late cameo by Twisted Sister and an offhand reference to breakdancing, Pee-wee’s Big Adventure is almost entirely devoid of period signifiers. Instead, the film occupies a time warp where the post-war suburban innocence of Pee-wee’s hometown shares space with bikers out of a 1968 Roger Corman exploitation movie, hobos from Sullivan’s Travels, and a studio where Godzilla knock-offs, Santa Claus movies, beach-party cheapies, and music videos all film on the same spectacularly versatile studio lot.

Pee-wee’s Big Adventure inhabits a Hollywood and a United States that has never existed outside the imaginations of children and dreamers, vast and flexible enough to include everything its creators have ever dreamed of putting in a movie, whether it makes sense or not. That’s part of the reason the film feels and looks so timeless. It could just as easily have been made in 1955 or 1995 as 1985. But it does make sense as a product of the Reagan decade, since Reagan—the big-screen cowboy who palled around with monkeys onscreen and starred in movies with Troy McClure-esque titles like Hellcats Of The Navy—would fit into the film’s crazy-quilt aesthetic. It doesn’t take much imagination to envision him hanging out with Milton Berle when Pee-wee crashes his entourage late in the film.

After a spirited chase through that studio lot, which doubles as a museum of B-movie history, Pee-wee finally gets his bike back, but only by agreeing to sell the studio the rights to his story. At this point, the film doubles back on itself and becomes a hall of mirrors, as our hero ends the film in a drive-in theater delivering refreshments to nearly everyone he encountered over the course of the film, while the film based on his story—titled Pee-wee’s Big Adventure—unspools on the big screen. This version of Pee-wee Herman’s big adventure bears only a fuzzy resemblance to the craziness we’ve just enjoyed, but a suspicious resemblance to the kind of second-rate James Bond knock-offs that littered television in the 1980s—right down to star James Brolin in his signature role of P.W. Herman, and Morgan Fairchild as his girlfriend Dottie. 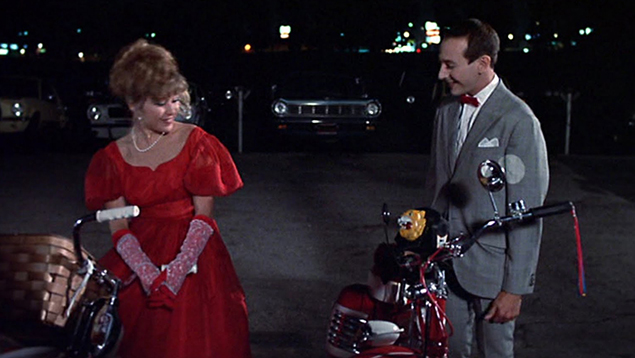 There’s something wonderfully inclusive about this ending, and the film itself, which brings together man-children and adults, live-action and animation, the innocence of Disney and the prankish irreverence of Looney Tunes, outlaws on the fringes and show-business insiders, the road movie and the show-business satire. A triumphant, justly proud Pee-wee ends the movie with a smile and a drive-in confection for everyone. The film is just as smart and charming in giving children and adults alike what they want without pandering to them in the process. (The film’s small-screen spiritual successor, Pee-wee’s Playhouse, pulled this off too, but Reubens’ listless big-screen follow-up, the Burton-less Big Top Pee Wee, had less luck.)

In the nearly 30 years since Pee-wee’s Big Adventure, Tim Burton’s dazzling sensibility has devolved from bold and exciting to overly familiar, though he had a hell of a run from Pee-wee’s Big Adventure through Mars Attacks. Reubens and Pee-wee have also had their ups and downs, yet Pee-wee’s Big Adventure remains timeless and fresh, a virtuoso work of brilliant young men blessed with the energy and ambition of youth. It retains the exhilarating shock of the new throughout the decades, remaining, like Pee-wee himself, forever young.

Tomorrow, our Movie Of The Week Forum talks over Pee-wee’s Big Adventure’s place in the road-movie tradition, its takes on childhood and Hollywood, and the nature of Burton and Reubens’ collaboration. Then on Thursday, Mike D’Angelo looks back at Danny Elfman’s career-establishing score for the film.