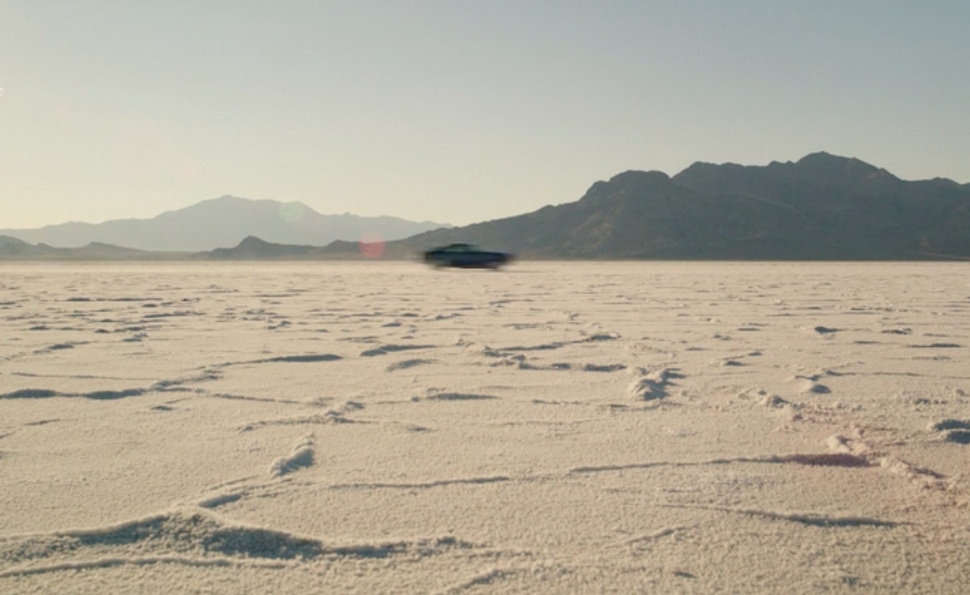 You can never go fast enough.” — The Driver, Two-Lane Blacktop

“You can put this behind you. It’ll get easier as you move forward.” — Don Draper, Mad Men

As Don Draper sped across the salt flats in the opening shots of Mad Men’s series finale, I was drawn back to a thought I’d had more than a year before: What if Mad Men turns out to be a prequel to Two-Lane Blacktop? Not in a literal sense—Don is about as likely to turn out to be the Driver as he is to be D.B. Cooper—but in the way Matthew Weiner’s portrait of a man running from his past points toward the story of three men and one woman who have none.

In fact, the opening scenes of “Person To Person,” Mad Men’s series finale, play like a subtle Two-Lane homage: As Don pulls his Chevy into the garage where two long-haired car buffs who might well be a (if not The) driver and mechanic, the song on the radio is by The Doors, who also turn up on the soundtrack to Hellman’s movie. Don might not have been racing cars cross-country in 1971, but there’s a decent chance he’d at least have taken the afternoon off from McCann to see Two-Lane Blacktop during its brief, doomed initial run.

In the wake of Mad Men’s finale, Slate’s Jessica Winter said, “Mad Men’s great subject has been not masculine self-invention or the 20th-century advertising business or the arc of the 1960s, but the changing role of women in the workplace.” But it’s also about how men like Don, the perfect embodiment of suave, taciturn 1950s masculinity, started to feel the ground shifting under their feet. Suddenly, it was no longer enough to earn a hefty salary and look good in a suit; Don’s wife, Betty, and the women who followed her wanted to share his inner life as well, the secrets they didn’t even know he kept. While unrepentant sexists like his new bosses at McCann still had plenty of power to wield, outside the rigid stratification of the office, the roles men had been raised to fill were beginning to break down, and nothing was taking their place.

Like Sam Peckinpah’s Straw Dogs (also 1971) and Pat Garrett & Billy the Kid (1973), Two-Lane Blacktop explores the destructive allure of classic masculine archetypes: the loner, the rebel, the protector. But where Peckinpah’s movies are productively at war with themselves, Hellman’s is less ambivalent. Where the outlaws in Peckinpah’s The Wild Bunch (1969) went out in a blaze of glory before their world vanished forever, The Driver and The Mechanic speed through a country that has no place for them. The race with GTO takes them east toward Washington, D.C., reversing the course of Manifest Destiny. It’s as if they’ve already gone West, young man—their 1955 Chevy has California plates—and are retracing their route to see what went wrong.

There’s an eerie, out-of-time quality to the places they stop along the way, the sleepy Southern towns that come to life around them, and instantly act to repel outsiders. The old woman who hitches a ride with GTO, taking her granddaughter to visit parents killed by a “city car,” might have stepped straight out of the 19th century, or at least a John Steinbeck novel. It’s easy to lose track of not only where they are, but when.

GTO, a pathological liar who tries out a new life story on every person in his passenger seat, is self-aware enough to tailor his words to his audience; he defuses a tense confrontation with one young local by assuring him that The Driver and The Mechanic are “hometown boys,” and ends the conversation with the regional shibboleth “Sure did talk to you,” to which the young man replies, “Sure did see you.” Don Draper’s denim and white T-shirt evokes the dress code of Two-Lane’s young protagonists, but if he fits into the story, it’s as GTO, the perpetually self-reinventing nomad trying to fend off the approach of middle age by consorting with people half his age. For those who think young, indeed.

The Driver and The Mechanic, by contrast, are what they are; GTO could take on a new identity just by buying a new car, but no matter which wheel he’s behind, The Driver will still be The Driver. Where GTO’s words spill out in torrents, The Driver and The Mechanic talk in curt, practical phrases, as if conversation were as finite a resource as gasoline. The Driver comes to life when spouting masculine bravado—“Make it three yards, motherfucker, and we’ll have us an automobile race”—and during the halting monologue where he tries to tell The Girl about cicadas, whose brief, purely functional lives mirror his feelings about his own. She, however, is not interested in his angsty introspection. Eventually, she rides out of the movie on the back of a motorcycle driven by a young man to whom she has not spoken a single world.

The Girl is Two-Lane Blacktop’s most opaque, most purely symbolic character. Warren Oates was a veteran actor, and James Taylor and Dennis Wilson had years of experience turning their emotions into song; Laurie Bird was utterly untutored. But The Girl’s reserve isn’t simply a function of Bird’s limited acting skills. Where Taylor sometimes seems to regard the camera as a hostile presence, Bird treats it with casual disdain, the way her character treats the men she comes across. She’s as mysterious to us as she is to them. She embodies the counterculture ideal of personal freedom without any of its higher ideals. She’s the wandering spirit as sociopath.

With nothing to tie them down, The Driver and The Mechanic just keep moving, living out GTO’s warning: “If I’m not grounded pretty soon, I’m gonna go into orbit.” The same thing might have happened to Don Draper if he hadn’t wound up at Esalen, embracing a total stranger and meditating his way to a Coke-fueled epiphany. The Driver’s mantra, “You can never go fast enough,” sounds like a boast, but it’s really an admission of futility; if you can’t go fast enough, why even try? And fast enough for what, anyway? Two-Lane Blacktop’s ending shows up: to escape his life, this world, to burn right through the screen and dissolve in the light. Next to that, maybe working at McCann Erickson doesn’t seem so bad.

Don’t miss Keith’s Keynote on where the film comes from and where it’s going, and Scott and Sam’s Forum on the film’s complicated performances and generational antagonism. And next week, we’ll be back with Ron Shelton’s Wesley Snipes/Woody Harrelson basketball comedy White Men Can’t Jump.