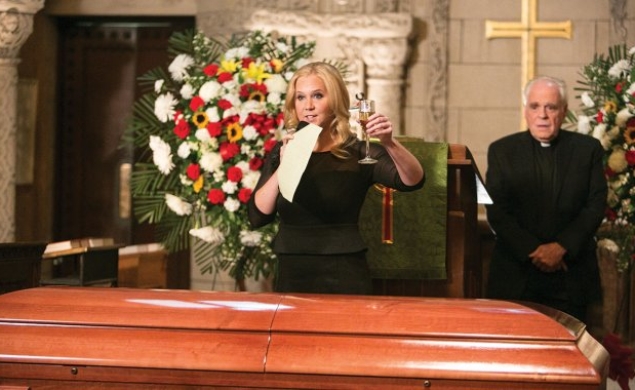 Harbinger of doom: Movies are even more sexist than real life when it comes to the workplace
FiveThirtyEight’s Walt Hickey did some number-crunching and found that the glass ceiling exists in movies even more than it does in real life. As he puts it, “Movies take place in a weird alternate universe where men outnumber women by more than 2-to-1, and where it’s strikingly rare for women to have a real conversation about something other than a man. This imbalance extends to how certain jobs are portrayed in movies, even in bit parts, and reinforces old gender stereotypes.” From 1995-2015, 89 percent of nurses in movies were women, 81 percent of secretaries were women, and 57 percent of teachers were women; on the flip side of the coin, only 10 percent of doctors were women, only 19 percent of jobs described as “business” (my official job title here at The Dissolve) encompassed women, and only 5 percent of engineers were women. And the vast majority, of course, were supporting roles. This is shitty in and of itself, but also, as Hickey points out, movies influence perceptions about gender—if every engineer on screen is a man, that sends a powerful message to men and women alike.

Another fun and related study, Gender Bias Without Borders, led by USC Annenberg professor Stacy L. Smith and released by the Geena Davis Institute on Gender In Media, revealed that the percentage of women who make up the on-screen workforce is even lower than it is in real life. Only 23.2 percent of employed characters depicted in American films are female. Davis’ institute is now conducting a second global study on the impact of limited female representation on boys and girls, as well as developing software to qualitatively analyze female screentime. Numbers in general are usually disturbing to me, but these are genuinely upsetting. Also, Geena Davis, I love you.

Sign of hope: Smart, influential people speaking out about feminism
There were several women and Feigs willing to throw their hats in the feminist ring this week. Here are a few great quotes from around the web:

Harbinger of doom: All Disney-Pixar women look the same
Intrepid Tumblr-er Alex of Every Flavored Bean found an unsettling pattern in Disney’s and Pixar’s movies: All of both studio’s female characters look the same. Round, youthful face. Button nose. Seriously. All of them. And the studios’ male faces, of course, range from chubby to hairy to big-nosed to—gasp—racially diverse. As Alex puts it, WHAT. THE. FUCK. Has there ever been a more on-the-nose representation (or on-the-nose pun than the one I just made) of the cramped, unforgiving beauty standards Hollywood places on women than the proof that, when given the chance, Hollywood gives all women the exact same face?

It’s likely that this has something to do with a quote from Frozen’s head of animation, Lino DiSalvo, last year: “Historically speaking, animating female characters is really, really difficult, ’cause they have to go through these range of emotions, but they’re very, very — you have to keep them pretty and they’re very sensitive to—you can get them off a model very quickly. So, having a film with two hero female characters was really tough, and having them both in the scene and look very different if they’re echoing the same expression; that Elsa looking angry looks different from Anna (Kristen Bell) being angry.”

I thought we were always so pretty when we were angry?

Harbinger of doom/Sign of hope hybrid: Ashley Judd’s Twitter threats
On Sunday, Ashley Judd made a #MarchMadness (did I do that right?) sports joke on Twitter, accusing Arkansas of “playing dirty” against Kentucky. The dark, roiling underworld that is Twitter responded by lobbing threats of sodomy and death against her. Rather than stay silent, Judd began tweeting back. “When I express a stout opinion during #MarchMadness I am called a whore, c—-, threatened with sexual violence. Not okay.” After she was met with more mockery and resistance, she made an appearance on MSNBC, telling Thomas Roberts, “The way things happen on social media is abusive, and everybody needs to take personal responsibility for what they write and not allowing this misinterpretation and shaming culture to persist. And by the way, I’m pressing charges.” Naturally, Twitter responded again, making light of her situation and mocking her for daring to speak up for herself—for example, user @FJBar75 tweeted, “Pressing charges against people that shamed her on Twitter. LOL! Good luck with that, princess.” Used @katomart wrote, “What the hell is #onlinegenderviolence ? I can’t take this whiny feminist crap. Act like grown ups.”

Undeterred, Judd took to Mic to speak even louder, penning a trenchant essay about violence against women online and off. It’s a powerful, personal piece that addresses how the Twitter incident was the norm rather than the exception (“My tweet was simply the convenient delivery system for a rage toward women that lurks perpetually”); how the response to her self-defense is a microcosm of the universal ways we talk about girls and women (“When they’re violated, we ask, why was she wearing that? What was she doing in that neighborhood? What time was it? Had she been drinking?”); her own experiences with rape and incest as a young woman (“I am a survivor of sexual assault, rape and incest. I am greatly blessed that in 2006, other thriving survivors introduced me to recovery. I seized it.”); and why she’s choosing to pursue charges (“I received a disturbing tweet with a close-up photograph of my face behind text that read, ‘I can’t wait to cum all over your face and in your mouth…’ I knew it was a crime. It was time to call the police, and to say to the Twittersphere, no more.”). She also used the piece to call other women and girls to action: “I am handing it back over to those of you who are unafraid to speak out against abuse like I have faced, and those of you who are righteous allies and intervening bystanders. You’re on it. Keep at it — on the Internet, at home, at work and in your hearts, where the courage to tackle this may fundamentally lie. We have much to discuss, and much action to take.”

Just a few weeks ago, I posted an article from the Washington Post’s Michelle Goldberg about how online abuse is turning women writers away from the industry; I myself have experienced nasty tweets in response to my writing that were directed solely at my gender. This isn’t just an issue that affects celebrities like Judd, and she’s right in that it represents the way women are treated at large. Hopefully—and this is admittedly an incredibly optimistic take—she’ll help change the way law enforcement looks at the online abuse lobbed inordinately at women. Either way, this is awesome and I will now watch all of Ashley Judd’s movies backwards in order to celebrate.

Overall, was this a good, bad, or neutral week for women in movies, Rachel?
So bad, you guys. Outside of the fact that the future looks, well, somewhat brighter—somewhere down the line, we’re getting biopics on Angela Merkel and feminist-focused features—this week, there was very little to celebrate. The movies we love are sidelining women, stereotyping women, and creating by-the-numbers templates for women’s appearances. Thank God for the likes of Ashley Judd, Geena Davis, Amy Schumer, et al., but their voices alone aren’t enough at this point. If only I could express my anger right now without looking so ugly!