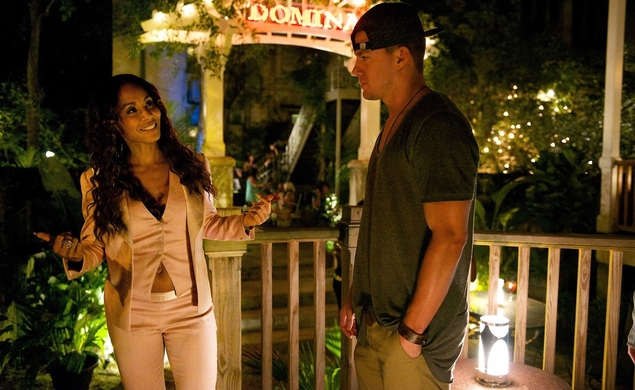 The Washington Post’s Soraya Nadia McDonald on how Magic Mike XXL understands female desire:
“In 2013, news organizations, spurred by findings in Daniel Bergner’s book, What Do Women Want?: Adventures in the Science of Female Desire, reported with breathless surprise what people like Dan Savage and other sexual health advocates have been arguing for years: that monogamy wasn’t all that great for women, either, and that it was probably to blame for the drop in libido for women in long-term relationships. Tracy Clark-Flory of Salon published a Q&A with Bergner headlined ‘The truth about female desire: It’s base, animalistic and ravenous,’ something which any male stripper worth his salt could have confirmed with the empirical evidence of professional experience…In Magic Mike XXL, it’s clear that Ritchie understands this is something women are still fighting to communicate, and he presents himself as a fantasy-realizing man-unicorn.”

Vulture’s Olivia Collette talks to Danny Elfman about the stories behind eight of his classic scores:
“If The Nightmare Before Christmas often comes up when naming Elfman scores, it could be because everything about creating this movie was different. The Kurt Weill–inspired Nightmare took two and a half years to complete, where most of Elfman’s film scores are done within 12 weeks, toward the tail-end of postproduction. That Elfman was cast as Jack Skellington’s singing voice was due in part to the fact that the pumpkin king’s identity crisis mirrored Elfman’s own at the time, particularly in the song ‘Jack’s Lament.’ ‘I really related very heavily to Jack and his relationship to Halloween,’ Elfman recalled. ‘It was kind of my relationship with my band, Oingo Boingo, at that point. I was the singer and the songwriter, so in a way, I was the king of my own little kingdom. But I desperately wanted out. I wanted something else. So as I was creating songs for Jack and writing those parts, I was also kind of writing from my own heart and where I felt at that time. So it’s a real character to fall into. I wrote most of everything in about 30 days with Tim, but when I recorded the demos with him, I finally said, “Tim, I almost couldn’t bear it if someone else was singing these songs.” And he said, “No, don’t worry. They’re your songs.” I was relieved because, at that point, the thought of someone else stepping into Jack would have killed me.’ ”

The Guardian’s Anne T. Donahue on the evolution of Channing Tatum from “dull beefcake dude” to “XXL movie star”:
“He also noted his rise to prominence has come as his projects (the Jump Street franchise, Magic Mike and Foxcatcher) have challenged the ‘preconceptions of him as a dull beefcake dude.’ And those preconceptions were a mistake. On top of She’s the Man boldly exploring gender norms (a big feat for teen films in 2006 and, let’s face it, even now), Mandle noted that Jump Street saw Tatum’s character realize jock tropes make him irrelevant (and problematic) outside his circle. Meanwhile, Foxcatcher is an exploration of the conflict that arises from the myth of male masculinity and bravado. Even Magic Mike explores the idea of manhood in an unconventional way, using exotic dancing as a template for examining what makes a man just that. These roles point to an actor who’s more than just That Guy Who Starred In That Dance Movie Once – they imply Tatum is a smart person who understands how the world works. And that, of course, makes us more forgiving about past roles in Dear John or GI Joe.”

After a particularly painful experience at a Trainwreck screening, Screencrush’s Matt Singer is begging us to stop clapping at movies:
“Look, we’ve all found something so incredibly funny that we clapped involuntarily. It happens. Once or twice a movie, that’s reasonable, for something that’s one of the funniest things you’ve ever heard. When Jason Statham lists all the insane things he’d done as a secret agent in Spy, that’s worthy of spontaneous applause. Or when the Hulk suddenly demolishes Loki in the first Avengers. That’s a great moment. Applaud away. But no one has 24 separate uncontrollable bursts of applause over the course of two hours. The funniest movie ever made does not contain enough jokes to justify that much acclamation. At one point the guy next to me almost leapt out of his seat clapping at a tampon joke. This is a middle-aged man! How much hands-on experience does he have with tampons? Does he really think that’s funny? Or is he more worried about everyone around him thinking he thinks it’s funny?”