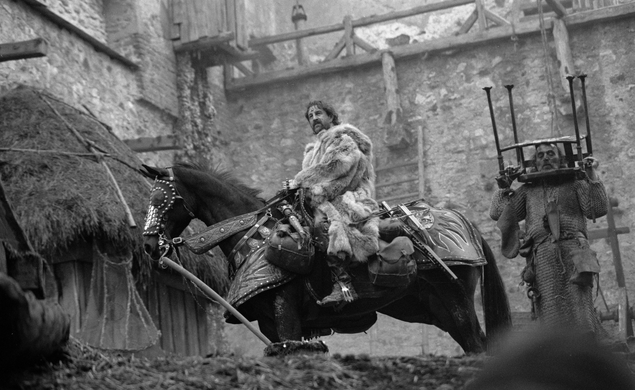 Hard To Be A God (2013)
Directed by Aleksei German
Free for Netflix subscribers on Netflix streaming
After 13 years in the making, the late Russian visionary Aleksei German’s three-hour sci-fi epic has been completed. A group of modern-day scientists travel to the twin planet Arkanar, a world identical to the Earth of the Dark Ages. Their quest to spread culture and enlightenment without seriously perverting the progression of history puts them on a collision course with violence, terror, madness, and filth—monochrome grime like this hasn’t been seen since Ben Wheatley’s A Field In England. It’s a nasty, exhausting picture, simultaneously repulsive in its commitment to immersive grubbiness and ravishingly beautiful. In turns, German’s 360-degree camerawork defies comprehension. He expands the boundaries of the sci-fi genre to fit his own loftily existential purposes, freely integrating historical elements and Bergmanesque drama. This film’s journey to American audiences has been long and arduous, but rest assured that the effort was well worth it.

Buzzard (2015)
Directed by Joel Potrykus
$3.99 to rent on Amazon, free for Amazon Prime subscribers
Marty Jackitansky, the piece-of-shit slacker played by Joshua Burge in Joel Potrykus’ unsettling, hilarious Buzzard, is independent cinema’s next great antihero. The only perk at his dead-end job in a soul-sucking office is that it enables him to scam $20 office-supply refunds from his employer. But a viewer gets the sense he’s the sort of dude who’d rather define himself by his passions—which include modifying a vintage Nintendo Power glove into a Freddy Krueger-styled weapon, wolfing down food barely fit for human consumption, and generally dicking around with his buddy Derek, played by Potrykus. The film’s combination of anti-everything punk attitude and sublimely awkward comedy earned it our Essential Viewing tag and then some. Come for the unbroken, minutes-long shot of Marty going to town on a plate of spaghetti, stay for the heavy-metal homage to Mauvais Sang!

Faults (2014)
Directed by Riley Stearns
Free for Netflix subscribers on Netflix streaming starting 7/4
The title of Riley Stearns’ comedic drama—or is it a dramatic comedy?—Faults refers to a cultlike religious order into which Claire (Mary Elizabeth Winstead, performing under her husband’s direction) has been initiated. The film takes much more interest in Ansel Roth (Leland Orser), the cult expert who agrees to deprogram Claire at her parents’ behest in order to earn enough cash to get him out of a life-threatening jam. He’s a portrait of failure, clutching his last vestiges of success like a life preserver in a vast, churning sea of mediocrity. Stearns skillfully mixes tones here, vacillating between suspense, humor, and tenderly human pathos. Winstead turns in a characteristically vivid performance as well, yet again posing the question at to why she isn’t way, way more famous.

Top Gun (1986)
Directed by Tony Scott
Free at Break.com
Take my hand, and together, let’s enter the Danger Zone. This former Movie Of The Week catches Reagan-era jingoism at the height of its popularity, with the rah-rah patriotism barely outdone by the oiled-up, flexing, aggressively homoerotic machismo. (The volleyball scene! That locker room!) Tom Cruise delivers a zeitgeisty performance as Lieutenant Pete “Maverick” Mitchell, an ace pilot, the best of the best and he knows it. To the strains of such ’80s classics as Kenny Loggins’ “Danger Zone” and the gauzy, Giorgio Moroder-penned “Take My Breath Away,” Maverick and hotshot pilot Iceman (Val Kilmer, approaching peak levels of Val Kilmerness) compete with each other for supremacy over the air. It’s a relic of a simpler time in action filmmaking, when pre-Furious 7 audiences held more modest expectations. They didn’t even know what they were missing. They didn’t think to demand that their cars drive through multiple skyscrapers. Indeed, it’ll be revealing to see where a Top Gun sequel fits in to a post-Furious 7 landscape.

Also new to streaming: Have yourself a monster mash with Underworld: Evolution (Netflix, Amazon Prime)…Revisit Tim Burton’s golden years with the 1989 Batman (Netflix)…The greatest weapon of all is laughter in martial-arts comedy Kung Fu Hustle (Netflix)…Attempt to tear your eyes away from Jude Law’s weird hair in A.I. Artificial Intelligence (HBO Go)…Mark Wahlberg gives those dastardly terrorists what-for in Lone Survivor (HBO Go)…I’m sure there’s a perfectly good reason to want to watch Saw V out there somewhere (Netflix)…Pig out on snacks while watching epic biopic Gandhi (Amazon Prime July 3)…Reflect on Eddie Murphy’s fall from grace with The Haunted Mansion (HBO Go)…Spend the rest of the day greeting everyone by yelling “OPA!” after watching My Big Fat Greek Wedding (HBO Go)…An ingenue develops vagina-teeth in the delectably cautionary horror flick Teeth (Netflix)