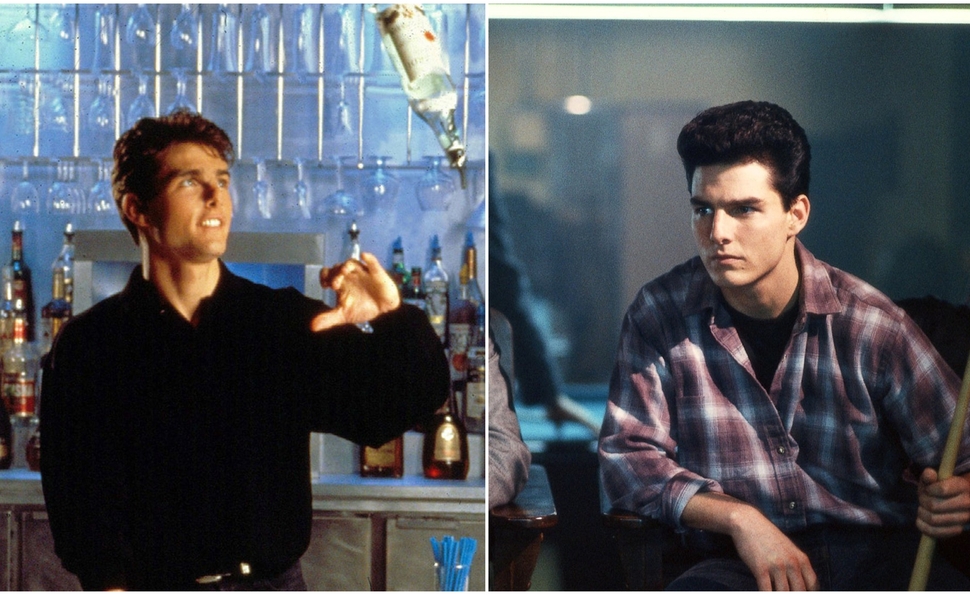 After Top Gun, Tom Cruise made Top Gun 2: The Color Of Money and Top Gun 3: Cocktail

The 1983 high-school sex comedy Risky Business wasn’t Tom Cruise’s first movie, but it was his proper introduction. The Cruise of Risky Business is the first real example of what became the best version of Cruise’s screen persona: the one who popped up again in Jerry Maguire, Eyes Wide Shut, Magnolia, and this summer’s Edge Of Tomorrow, among other films. The secret to a great Cruise performance is that there should be some sizable cloud of desperation throwing a shadow across the actor’s blinding smile. Cruise is an intensely handsome man who seems to brim with confidence, but uncheckable power can be tedious, which is why Cruise excels at playing men who are shaken and confused. Risky Business ends with Cruise’s teen entrepreneur ascendant; after turning his parents’ upscale suburban Chicago home into a brothel for a night, Joel Goodson earns enough to fix everything he’s broken throughout the movie. But what makes that ending so satisfying is how Cruise spends the first hour-plus of Risky Business playing Joel as a luckless kid who’s an easy mark.

After Risky Business, Cruise had an unhappy experience making Legend with Ridley Scott, and responded by working closely with producers Don Simpson and Jerry Bruckheimer on the script for 1986’s Top Gun, honing it until the ratio of cockiness to self-doubt in Cruise’s fighter-pilot character, Pete “Maverick” Mitchell, was roughly inverted from who Joel is in Risky Business. Moviegoers ate it up, and Cruise had found his other recurring onscreen persona: the man of skill, who starts a story as one of the best in the world at what he does, and is only a few pat life-lessons away from becoming the best.

By the time Top Gun opened in summer 1986, Cruise already had his next film ready to go: The Color Of Money, a sequel to the 1961 Paul Newman vehicle The Hustler, with Newman reprising his role as pool shark “Fast” Eddie Felson, now semi-retired and making money staking and coaching other talented young players. Cruise plays Vincent Lauria, a hustler whom Eddie mentors. Vincent is like Maverick with a pool cue: a youngster with raw talent and chutzpah, who just needs to learn to be more patient and temper his arrogance. 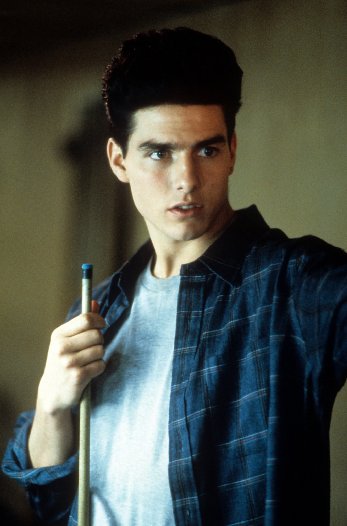 The Color Of Money was a pivotal film for Cruise’s career. By working with Newman and director Martin Scorsese, Cruise was making a statement, declaring he had no intention of being another Brat Packer who spent more time in the tabloids than on a movie set. Cruise thought of himself as the heir to stars like Newman, who cared about the craft of acting and the art of cinema. So with The Color Of Money, he was establishing a precedent that made it seem more natural for him to star alongside Dustin Hoffman in Rain Man and Jack Nicholson in A Few Good Men, and for him to work with auteurs like Oliver Stone (Born On The Fourth Of July), Stanley Kubrick (Eyes Wide Shut), and Brian De Palma (Mission: Impossible).

In the documentary Life Itself, Scorsese talks about Roger Ebert’s negative review of The Color Of Money, and how it reminded Scorsese that he had a responsibility as an artist to try and do his best work every time out. But The Color Of Money is actually a good movie—and one that plays better on repeat viewings, especially by contrast with the films Cruise starred in on either side of it. It’s a stylish picture, with Michael Ballhaus’ cinematography and Thelma Schoonmaker’s editing capturing the rush of action in a pool hall. And it’s a film of subtle flavor, with Richard Price’s script capturing the patter of guys who spend most of their time bullshitting in bars. Unlike most Scorsese movies, The Color Of Money is low-stakes, and it ambles along without getting anyplace of consequence; but from scene to scene, it’s entertaining and adept, revealing how luck, skill, and human behavior are easy to calculate, but hard to predict.

The biggest issue with The Color Of Money, really, is Cruise. In the Maverick/Vincent arc of his career, he was still in the first act when he made The Color Of Money—still a flashy hotshot, not good enough or disciplined enough to do his job right. Scorsese uses him well, playing up Cruise’s wired boyishness, contrasting with Newman’s seen-it-all calm. But Cruise doesn’t work up the flop-sweat he did in Risky Business. He’s still mostly in Maverick mode—singing Warren Zevon, doing kung-fu moves with his pool cue, letting a grin or a furrowed brow substitute for actual emoting—and he seems at times like the marketing department plugged him into the picture, like a walking, talking bit of product placement.

The Color Of Money was another hit for Cruise (and for Scorsese, who needed one right about then), which proved that the public’s appetite for his Top Gun persona hadn’t been satisfied. So after a little time off, Cruise came back in 1988 with a movie that gave the people exactly what they wanted.

Cruise has always been calculating with his career choices—even the good ones—but Cocktail may be the most cynical movie he’s ever made. Overtly attempting to capitalize on the enduring affection for Top Gun, Cocktail stars Cruise as Brian Flanagan, an Army vet—a post-discharge Maverick, in other words—who moves to New York to make it big in business, though he has no degree, no experience, and no particular interest in anything besides the idea of wearing a suit and making a lot of money. While he reads self-help books and takes classes, Brian takes a job as a bartender, and learns from the more experienced Doug Coughlin (played by Bryan Brown) how to dazzle rich, drunk New Yorkers by dancing, spinning bottles, and spouting blarney. Soon, Brian is one of the best in the business, though some personality defects—such as his macho competitiveness and his romantic attachment to the values of loyalty and true love—keep him from achieving his dream of opening and franchising his own bar.

In the right hands, Cocktail could’ve been parody: a subversion of the Top Gun plot and character that mocks its predecessor by changing the stakes from “defending the country” to “making a kick-ass mai tai.” And Cocktail is interesting as a snapshot of its times, commenting on the spiritual emptiness of a yuppified late-1980s New York. Brian and Doug have a fascinating relationship, simultaneously simpatico and antagonistic. Both of them fancy themselves as sharper than the dopes they serve, but Doug also needs Brian to know who’s really the smartest, so he regularly pulls stunts that undermine Brian’s confidence and wreck the kid’s relationships. Again, this is like the dynamic between Maverick and his buddies—or like that between Vincent and Eddie in The Color Of Money—only twisted into something sicker and sourer. Even Cocktail’s R-rating and smutty-sounding title smack of an exposé of what “the Tom Cruise movie” is really about, circa 1988. 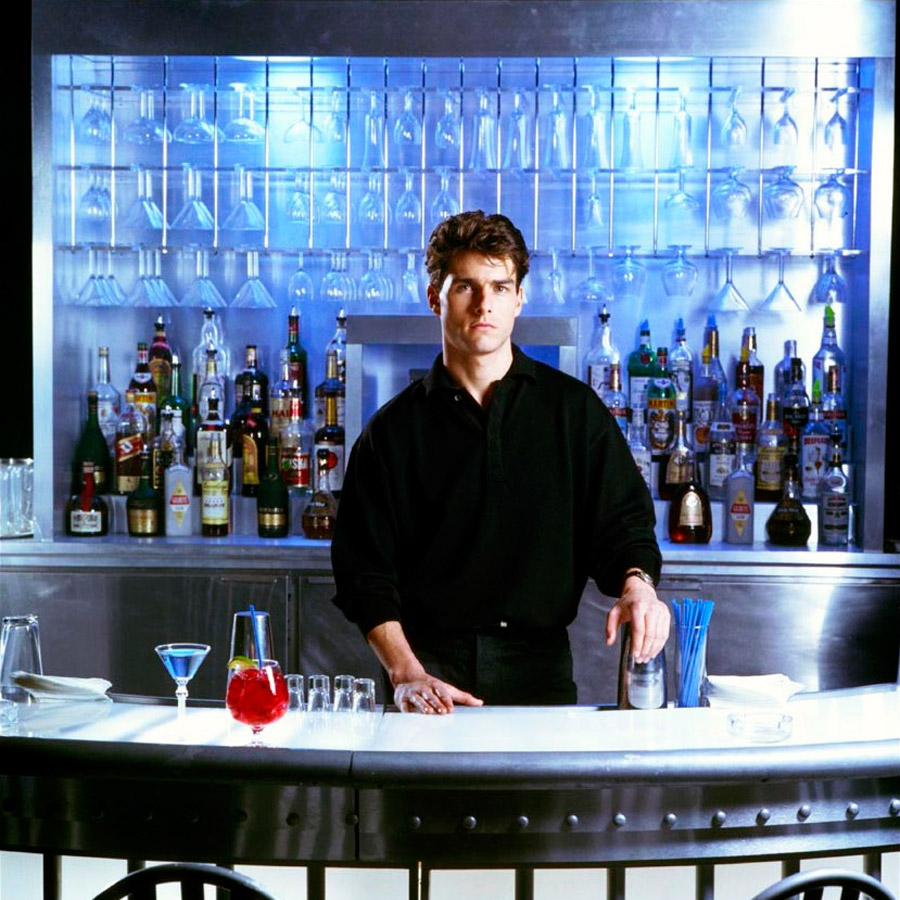 It’s a reach, though, to say the creators of Cocktail were savvy enough to take on Top Gun so directly. Director Roger Donaldson is a competent journeyman with only a handful of strong films on his résumé, and screenwriter Heywood Gould (adapting his own book) has had a career dominated by straight-faced movies about cops. Both men seem to have put themselves in service of the the Tom Cruise machine, making a movie heavy on montages, close-ups, and forced conviviality. (For the first hour of Cocktail, everyone’s chuckling and grinning almost constantly, for no legitimate reason.) Anyone who wants to understand what difference a director, screenwriter, cinematographer, and editor can make to a film should watch The Color Of Money and Cocktail back-to-back. As aimless as The Color Of Money is, it has flow and flair, and never pretends to be something it isn’t. Cocktail pinballs from one trumped-up dramatic moment to another, with a lot of shouting, but not much passion.

Earlier this year, Amy Nicholson wrote a persuasive article in L.A. Weekly arguing that when the Internet decided to turn Tom Cruise into a big joke—mocking his enthusiasm and his religion—it did a disservice to cinema, because this happened right when Cruise was cashing in on his commercial capital to make more challenging films. Cruise has made some great movies post-2005 (Mission: Impossible—Ghost Protocol and Edge Of Tomorrow are two of the best of his career), but nothing to compare to that run from 1999-2005, when he starred in Eyes Wide Shut, Magnolia, Vanilla Sky, Minority Report, Collateral, and War Of The Worlds. He’s retrenched somewhat over the past decade—not to “the Tom Cruise role” he repeated so often in the 1980s and early 1990s, but to a string of safe action movies that haven’t required him to show much personality at all.

That said, the blander, more sullen Cruise of films like Valkyrie and Jack Reacher at least feels more authentic than the Cruise of Top Gun and its non-sequel sequels. Cruise back then often came off like a movie star who’d been manufactured in a lab, given quirky little traits—like the way he sings classic rock and R&B in nearly every picture—and made to be “sexy,” even though his version of actual onscreen sex looked more like he was wrestling on the floor with a buddy. The most honest moment Cruise has in Cocktail is when he leans in to customers to take their order. And the most telling moment is when he stands on the bar to recite a poem, and the patrons start applauding before he’s even said a word. That’s how big Tom Cruise was in 1988: People cheered him just for standing up and being Tom Cruise for them.

Our Movie Of The Week discussion of Top Gun concludes here. Don’t miss Monday’s Keynote on the film’s distinctively American confidence, and Tuesday’s staff forum on its influential “Miller Time” style, its ripe notions of military heroism and sexuality, and more. Next week, we’ll be back with a discussion of Terminator 2: Judgement Day.