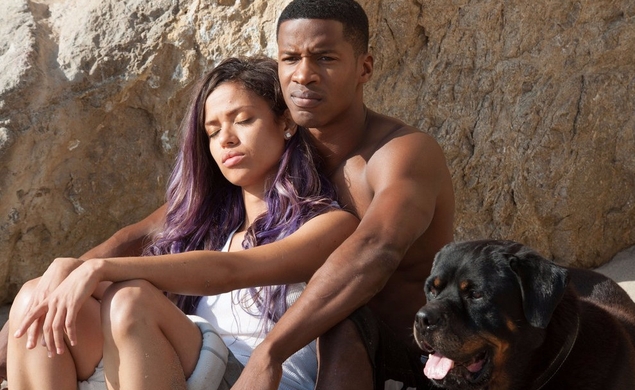 Buzzfeed’s Simran Hans asks why we’re not seeing more black lives on the big screen, particularly in the U.K.:
“Beyond the Lights begins in south London. Macy, a single mother, cheers on Noni, her mixed-race daughter, as she sings Nina Simone’s ‘Blackbird’ at her primary school talent show. Noni’s talent carries her all the way from Brixton to Beverley Hills, landing her a career as a pop star. Later, over the closing credits, Londoner Rita Ora’s Oscar-nominated song ‘Grateful’ plays. Noni’s British identity is threaded throughout the film, her fish-out-of-water quality only emphasised by her British accent. If Britain has such a presence in this film, then why is it that almost a year after its release in the US, most British audiences have yet to see it? The mother and daughter in Beyond the Lights are played by British actors Minnie Driver and Gugu Mbatha-Raw. The latter joins a long – and ever-expanding – list of black British actors (from Marianne Jean-Baptiste to David Oyelowo) who have left London for Los Angeles. An ongoing discussion about the implications of such an exodus for the British film industry is taking place, but it isn’t just black actors Britain is losing out on – it’s black films, too.”

Vox’s Todd VanDerWerff charts out how Inside Out’s five emotions work together to make more feelings:
“But the movie also reveals that as we get older, our emotions begin to blend together into newer, more complicated feelings. Early in the film, Riley — the 11-year-old girl whose mind serves as Inside Out's primary setting — is largely defined by very primal feelings. She's either all joy or all sadness. She's all anger, or all fear, or all disgust. However, once Riley moves from Minnesota to San Francisco, she discovers that her joyful memories of her old home are now tinged with sadness. That's an emotion adults know all too well, one called melancholy, and a big portion of Inside Out's final moments is taken up with both the reveal of this ‘hybrid’ feeling and the assurance that experiencing it is a healthy, normal part of growing up…That got us wondering what the many blends of Riley's five core emotions might look like. What happens when fear is combined with disgust? Or when anger is combined with joy? Here’s our best guess, in graphic form from Christophe Haubursin.”

Wired’s Jordan Crucchiola shares the story behind Jennifer Phang’s Advantageous:
“There’s a key operating tenant that indie cinema icons Jay and Mark Duplass have been spreading for a while: the ‘available materials school of filmmaking.’ In other words, it means you take what you’ve got around you and grow your vision from there. For Phang, that meant calling on the community she’s amassed over her years making under-the-radar films and using all their available talents. She knew she wanted Advantageous’ protagonist, Gwen, to play an instrument in the film. Kim could play the trumpet, but there was a piano in the apartment they had rented out, and Kim could play that too. So, piano it was! Kim is also a proficient French speaker, much like Samantha Kim, the young actress cast to play her daughter, Jules. Now the two characters could speak in French to each other and Gwen could help Jules with her homework. Beyond those more practical props, a large portion of the visual effects were done by a group of recently graduated and currently enrolled art students that specialize in helping independent filmmakers with VFX, and she got connected with them by a woman she worked with on Half-Life in 2008. For the score, Phang tapped an old friend named Timo Chen to form its sonic palette, which he did by creating sounds from scratch and folding them together with over-the-counter software components, hand-played instruments, and found objects.”

Movie Mezzanine’s Angelo Muredda shares his thoughts on Les Blank’s A Poem Is A Naked Person:
“Partway through My Old Fiddle: A Visit with Tommy Jarrell in the Blue Ridge (1994), Les Blank’s look at the Appalachian fiddling and banjo master whose humble instrument landed itself in the Smithsonian after its owner’s death, we’re treated to a tutorial from Jarrell’s sister on suckering, a process of stripping shoots from plants. That tangent is as good an illustration of Blank’s method as any, whereby a portrait of a highly situated, regional artist compulsively strays from its ostensible subject to bask in the curious textures of the more colorful world around him. Though Blank’s filmography is a treasure trove of such sideways ethnographic insights, jewels seemingly grasped by accident and subsequently rescued from the dustbin of American traditional music history, the touchstone film that puts the others into their proper context might be A Poem Is A Naked Person. Filmed over a long stretch from 1972-1974 and consigned to its own unofficial dustbin until its recent debut at SXSW, the typically strange documentary follows blues musician and sideman Leon Russell in the loosest way possible, gathering the energy of his crackling live performances only to deliberately trace its dissipation into an impressionistic record of the diverse scenes its subject orbits.”