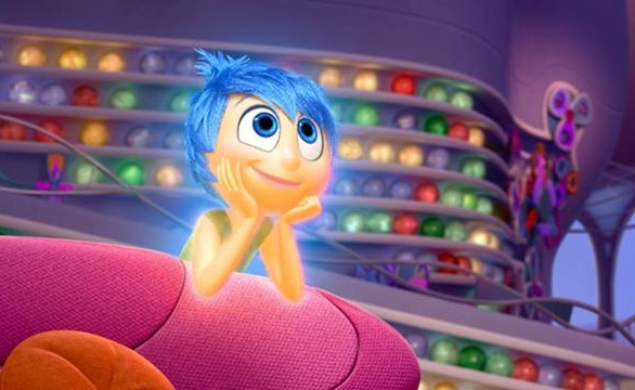 The New Yorker's Richard Brody did not care for Inside Out:
“Since the subject of the new Pixar film, Inside Out—directed by Pete Docter and co-directed by Ronaldo Del Carmen—is life lived in the grip of emotions, let me admit to mine: I emerged from the theatre feeling like W. C. Fields, hating children, all children, even my children, because of what those who purport to make movies for them have been doing, both to movies and to children. Part of the reason for this contained fury is the fact that I couldn’t ascribe that feeling to any of the five backroom toilers who figure in the movie itself—Joy (voiced by Amy Poehler), Sadness (Phyllis Smith), Anger (Lewis Black), Fear (Bill Hader), or Disgust (Mindy Kaling). They are five characters who live inside the mind of the eleven-year-old Riley (voiced by Kaitlyn Dias) and take control of her actions. For all the cleverness of Inside Out, I was jolted from the start by its deformation of children and of mental life. I saw a feature-length sales pitch—or, worse, an indoctrination—to mold kids into beings as artificial and uniform as those created, by computer graphics, in the movie. The film is on the wrong track from the beginning, when the first view of the world, through the eyes of the infant Riley, is taken by Joy, and Joy becomes, from that point on, the default leader, Riley’s emotional captain.”

LA Weekly’s Amy Nicholson: “You thought you were a good person for getting weepy over the Batkid video. You were wrong.”:
“At first, Batkid Begins' tone teeters on self-congratulatory. Uncharitably, I found myself getting peevish at the attention lavished on Miles' wish and wondering if the parents of survivors with less pop-culture-catchy dreams felt slighted. After all, the Make-a-Wish Foundation creates an average of 40 dreams a day (a surprising percentage involve WWE wrestler John Cena, who's met more than 450 children). Johnson, our Batman, mentions in the film that he previously spent seven months helping a kid named Ben design a video game about chemotherapy. Ben used his wish to give other sick kids a visual way to fight cancer. The Dalai Lama honored the two as ‘Unsung Heroes of Compassion.’ Unsung is apt — I'd never heard of Eric and Ben's accomplishment, and wish I had. But we're in a cultural moment (or really, a cultural epoch) where full-grown adults like the exuberant Mike Jutan, a Lucasfilm engineer, collect Superman figures and dress as Captain America for fun. No wonder Jutan eagerly enlisted to play the Make-a-Wish Penguin….Batkid Begins wants audiences to celebrate the everyday heroes who donated their time and energy to Miles' dream. Absolutely, we should. Still, take a minute to ask what the disproportionate investment and interest in Batkid's adventure says about our own maturity — and how the Internet allows us to feel like champions for rallying for one afternoon, while overlooking the years of unglamorous doctor appointments before it.”

Grantland’s Alex Pappademas charts Mark Wahlberg’s transformation from “crotch-centric underwear model to sexless movie star”:
“Wahlberg began his career as a sex symbol — a rapper turned underwear model with comic-book abs you could juice a lemon on. Nearly every story anyone’s written about him in the ensuing years contains some reference to his brief stint as the face and torso of Calvin Klein, usually as an ignominious origin story he’s managed to live down (along with a teenage history of cocaine abuse and violence) through professional accomplishment. But what’s interesting and a little bit sad about Wahlberg’s post-underpants career arc is the degree to which he seems to have overcorrected this image problem, particularly during the last 10 years. He’s more buff than ever — in Transformers: Age of Extinction, he’s like the third-biggest truck onscreen — but he has also become a weirdly closed-off, almost asexual performer. He’s 44, but his screen persona seems more than ever like a young boy’s idea of a man.”

In honor of Hackers turning 20, Hopes And Fears assembled a group of actual hackers to watch the cult classic:
“On the tech: HACKER 2: I think one of the most unrealistic parts is taking a floppy that you wrote on a machine, putting it in another one, and all of the files had no read errors.
H&F: Or pulling it out of the trash and still having it work.
HACKER 2: Yeah, with the gum on it.
HACKER 3: Floppies were resilient!
HACKER 2: No, they were not!”